Flying with The Dalai Lama

Adapted from Moonpointer, a popular Buddhist blog, the below entry is written by a fellow Dharma brother, Shen Shi'an, who is also responsible for The Daily Enlightenment.  Shi'an has kindly and graciously allowed me to republish his encounter with His Holiness the Dalai Lama. This, once again, shows how kind The Dalai Lama is, the Living Kuan Yin. 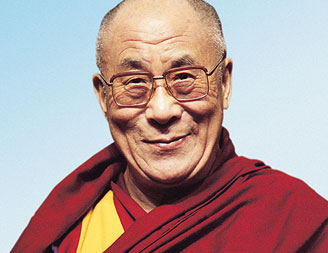 Despite a domestic flight delay at Delhi airport towards Dharamasala, we accidentally but surely, karmically ‘bumped’ into His Holiness the 14th Dalai Lama, who was also taking the same plane as us. The delay turned out to be a blessing in disguise! Everyone was excited, as most of us, from various countries, were taking the small 40-seater jet to hear his upcoming 3-day teachings! Once the plane took off, passengers started crowding to the plane’s tail end, where he was seated, to give money offerings, bow or snap photos. It got to a point when the stewardesses had to urge passengers to go one at a time, as the shift in weight might tip the plane backwards!

The captain even announced that it was an honour to have HHDL onboard, and later walked out of the cockpit cabin to get his signature! Immersed in the excitement, I tried to get excited too, and got ready a red packet to offer. Then somehow, it occurred to me that it wasn’t really ‘me’ to be a ‘fanboy’ in this manner, and HH probably needed some rest and privacy too. We’re going to hear him in person delivering the Dharma anyway. What ‘mundane’ thing do I want from him now? I kept the money for offering, which I later offered directly at his office. I later heard from a friend that HH doesn’t quite like taking money from devotees, and would rather the money be accounted for, for various necessary uses at the office.

The good news is that I met him in person up close later, thanks to a special arrangement by a friend. I offered him something special, which I might share about later. I looked at him really close in the eyes, and offered him a recycled katha, and had a very brief dialogue with him. His eyes are kind and light brown, and his hand with which he grasped mine for a photo was gentle, warm and soft. He is as the others say! He offers you full attention and compassion in the moment he is with you (even though I am a nobody). May HHDL live long to benefit many! 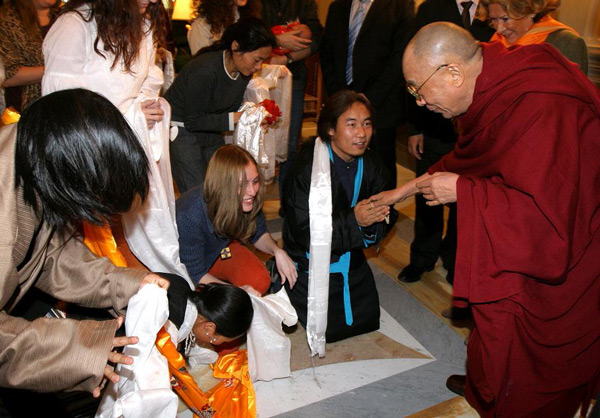 Thanks to Shi'an for sharing the above entry. May His Holiness the Dalai Lama, this Living Buddha, a manifestation of Chenrezig (Kuan Yin), the Bodhisattva of Compassion, remain with us till samsara ends.  You may wish to read my earlier post on "I dreamt of Chenrezig!".
yours truly, STUMPBO @ 1:55 am