I dreamt of Chenrezig! 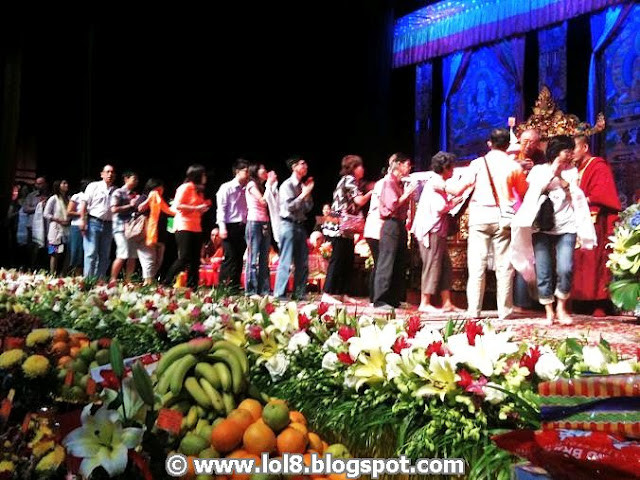 I attended 4 grand scale important pujas and 2 initiations for the first 2 days of the 3-day public Dharma event graced by His Holiness Dagyab Rinpoche and 18 lamas. It was blissful and I was real fortunate to be able to receive so much immense blessings. Eternally grateful to Gaden Shartse Dro-Phen Ling for organising this event and all the volunteers who worked so hard for a good cause. 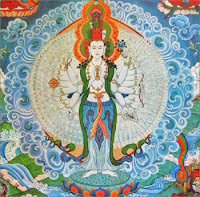 I was greatly disappointed and a little sad that I was not able to attend the Great Empowerment of 1000-Armed Chenrezig (Kuan Yin) today, the final day of the event, as I had to be present for my grandmother's birthday celebrations. I was in a dilemma for a few days whether to miss the birthday gathering as I wanted so much to receive the initiation of Kuan Yin from Dagyab Rinpoche himself, because I do have a special affinity with Kuan Yin and I had wanted to receive this empowerment from an important guru. (Incidentally my root guru, Lama Zopa Rinpoche is also bestowing the empowerment of Chenrezig in Kuala Lumpur today). Today, my grandmother is 86 years old and I also wanted to celebrate her birthday with her, because..... life is fleeting and I just wanted to spend special important dates with a grand old lady as much as I can. I love my Grandma very much.

After 4 pujas and 2 initiations of the 2 days, last night I was so knocked out that I slept for 11 hours straight. Extremely drained but in a blissful way. This is because after attending the 4 important intensive pujas, it also meant clearing of much negativities and obstacles and receiving great blessings. It is a form of spiritual purification, and it is not uncommon for me to feel knocked out after such pujas.

Last night, I had 2 dreams but I cannot recall the second one now. The first short dream, I was in a small apartment which was sparsely decorated, really minimalist, and there was hardly anything inside the apartment besides bright and clean 4 walls. I remember going into a very tiny bathroom, just big enough for me to sit on the toilet bowl. The size of the bathroom was even smaller than that of the toilet in an airplane. 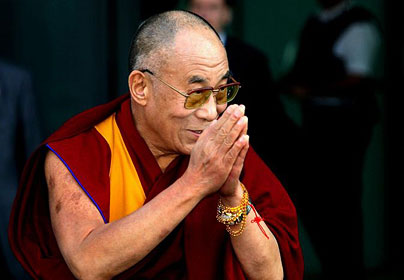 Apparently, the apartment belonged to a young couple with 2 small kids, a boy and a girl. I do not know why I knew as I only briefly saw the lady of the house and 2 small kids. After the bathroom, I came out into a very bright courtyard, and I met a girl called Davienne. I do not know her, and she said her name was Davienne. Then just as suddenly, I saw His Holiness The Dalai Lama appearing in the courtyard out of nowhere, in his usual maroon monk's robes and smiling broadly. 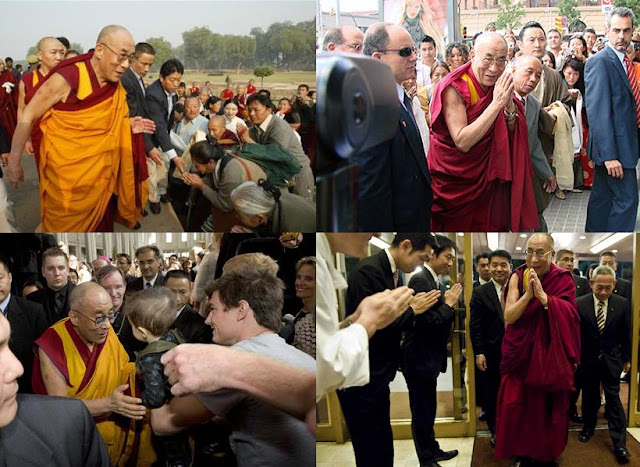 What was weird to me was, he was alone. Usually the previous few times I dreamt of His Holiness, he was always accompanied by men in black suits (presumably security/bodyguards) and lamas, and surrounded by lots of followers. This time, he just appeared out of nowhere and alone, smiling with clasped palm. 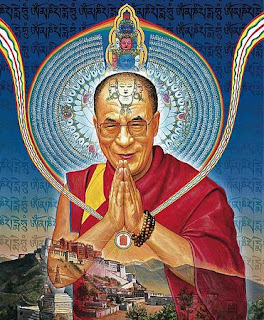 In the dream, of course I was elated and excited on seeing the Living Kuan Yin. The Dalai Lama is the manifestation of Chenrezig (Kuan Yin 观世音菩萨), the Bodhisattva of Compassion. He is an Enlightened Being (Living Buddha) who has postponed his own nirvana and chosen to take rebirth in order to serve humanity. Chenrezig (Kuan Yin) is the embodiment of compassion of all infinite Buddhas. Chenrezig represents the benevolent wishes of all the ten directional Buddhas. Due to her vow to liberate all sentient beings, she manifests into various forms to benefit different beings and has an especially close affinity with sentient beings of this age. One form of manifestaton is the 1000-Armed Chenrezig (千手观音).

According to legend, Chenrezig made a vow that he would not rest until he had liberated all the beings in all the realms of suffering. After working diligently at this task for a very long time, he looked out and realized the immense number of miserable beings yet to be saved. Seeing this, he became despondent and his head split into thousands of pieces. Amitabha Buddha put the pieces back together as a body with very many arms and many heads, so that Chenrezig could work with myriad beings all at the same time. Sometimes Chenrezig is visualized with eleven heads, and a thousand arms fanned out around him.


Back to the dream..... in the courtyard, standing alone in front of that stranger Davienne and myself, His Holiness the Dalai Lama was telling us something (which I cannot recall now), but for the first time in my dream, I could hear him speaking, his empowering voice, and speaking with his fingers gesturing, as if giving some instructions, the very same way he is whenever he is speaking in front of an audience. 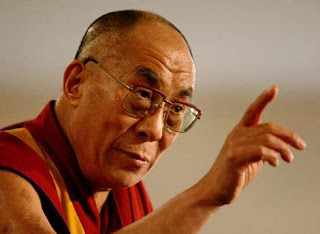 In the dream, as he was speaking, I was thinking, was it possible to request His Holiness for a photo to be taken with him, and I was wondering how to open my mouth ( I was a little shy and in awe in front of Him, with my head bent slightly and palms clasped). Then just as quickly, in a split second, he told me and Davienne, to get ready to pose with him for a photo! Wow! I was so happy! It was as if he could read my mind!

His Holiness was standing there getting ready to have his photo taken, with me on his left and Davienne on his right. He was holding our hands. Just as the photo was to be taken, there suddenly appeared a car next to us and many men in black, posing with us as well. His Holiness and myself and Davienne were in front of the car and the men. Everyone was smiling so happily, an upbeat atmosphere in the brightly lit courtyard. And that was it.

I woke up suddenly at the end of the dream, and first thing I thought was "Chenrezig!" and the empowerment that was on today. I thought there must be some connection somewhere. Although I went ahead to celebrate Grandma's birthday, and missed the Chenrezig empowerment, I was really heartened to have dreamt of His Holiness the Dalai Lama at an appropriate time, and to have received blessings from Kuan Yin (Chenrezig) himself! 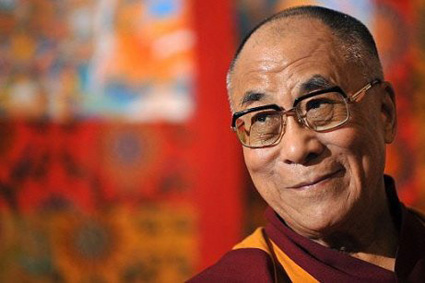 This is an auspicious dream. Thank you, Your Holiness! May all the blessings I have received from Chenrezig be bestowed upon my Grandma, and may she has a long and healthy life. Om mani padme hum!!
yours truly, STUMPBO @ 11:23 pm