How's your week? This week, this made me laughed. To think of the things people come up with, especially coming from the West. And this is Asia according to (yo!) Americans.... (Fortunately, Singapore is just a little red dot in the world map, or they had called us the "FINE" city).

I saw this and absolutely love it!  What great advertising from your neighbourhood cobbler! 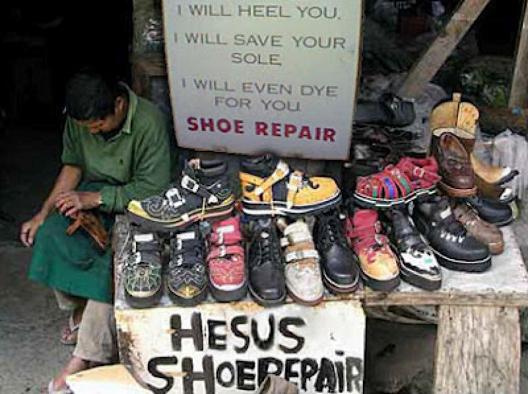 I also LOL-ed after reading the below article although it is a very sad case of desperation, or stupidity. What is wrong with these people?  What an absurd twist to the story. Even more hilarious were the comments in the forums about this story.  Makings of a movie, anyone? 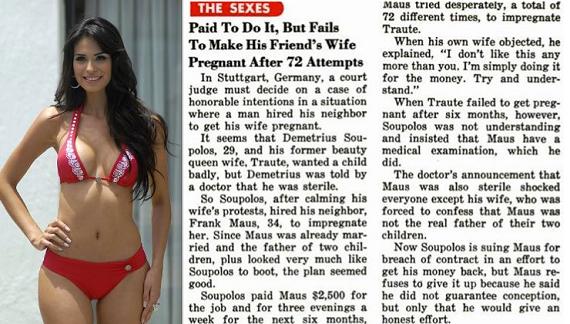 In Stuttgart, Germany, a court judge must decide on a case of honorable intentions in a situation where a man hired his neighbor to get his wife pregnant. It seems that Demetrius Soupolos, 29, and his former beauty queen wife, Traute, wanted a child badly, but Demetrius was told by a doctor that he was sterile.

So, Soupolos, after calming his wife’s protests, hired his neighbor, Frank Maus, 34, to impregnate her. Since Maus was already married and the father of two children, plus looked very much like Soupolos to boot, the plan seemed good.

Soupolos paid Maus $2,500 for the job and for three evenings a week for the next six months, Maus tried desperately, a total of 72 different times, to impregnate Traute.  When his own wife objected, he explained, "I don’t like this any more than you. I’m simply doing it for the money. Try and understand."

When Traute failed to get pregnant after six months, however, Soupolos was not understanding and insisted that Maus have a medical examination, which he did. The doctor’s announcement that Maus was also sterile shocked everyone except his wife, who was forced to confess that Maus was not the real father of their two children.

Now Soupolos is suing Maus for breach of contract in an effort to get his money back, but Maus refuses to give it up because he said he did not guarantee conception, but only that he would give an honest effort.