It's Chokhor Duchen on 15 July! Merits increased by 100 million times! 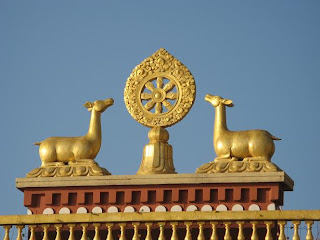 There are four days in a year which are highly significant for Buddhists. These 4 events/occasions (or 'duchen' in Tibetan) mark the great deeds of the Buddha, and they are also merit-multiplying days whereby both positive actions and negative actions are increased multiple-fold by 100 million times. The 4 holy days are:
1. Chotrul Duchen
- Buddha displayed a different miracle each day to inspire his disciples.
2. Saka Dawa (Vesak)
- Celebrates Buddha's enlightenment, death and parinirvana.
3. Chokhor Duchen
- Commemorates the Buddha’s first sermon and the teaching of the Four Noble Truths. It is known as the 'Turning of the Dharma Wheel' day.
4.  Lhabab Duchen
-  Commemorates the Buddha’s descent from the heavenly realm following his visit there to teach his deceased mother.

This year Chokhor Duchen falls on 15 July 2010 (this Thursday).
Forty-nine days after Buddha attained enlightenment, as a result of requests from disciples, he rose from meditation and taught the first sermon, Wheel of Dharma, which include the Four Noble Truths. It is because of the great kindness of the Buddha in turning the Wheel of Dharma that the people of this world have the opportunity to follow a spiritual path to the permanent inner peace of enlightenment. Without these teachings there would be no path for us to follow and so no possibility of bringing our suffering to an end. 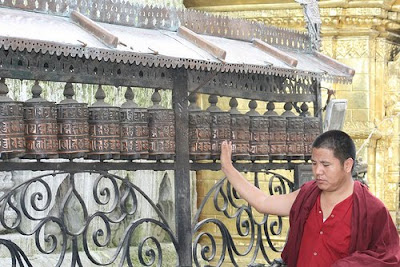 Amitabha Buddhist Centre (ABC) will be having various activities listed below on this special day, 15 July.
Please perform virtuous, meritorious deeds on this day.
yours truly, STUMPBO @ 5:44 am