This was my playground - Raffles Place in nostalgia

Someone posted an old photo of Raffles Place in the 1970s in Facebook and I recognised it instantly. It brought so much memories. I went in search for more photos like this and managed to find quite a few. I was looking for some particular places where I remember them in the older days when I was a little kid, but they are blurry memories to me now. Here I put together those places I remember fondly of. I have converted all the photos into purely black and white, just for that nostalgic feel.

This was Raffles Place in the late 1970s. Then, it was a simple enchanting garden, the very playground I used to play in. In the heart of the city, this place was first named Commercial Square but renamed to Raffles Place back in 1850s. My late grandpa often bring me here to the park to have a stroll and to play since we were staying nearby. This open space in the landscaped garden had 2 ornamental fountains and 42 lamps that lit the garden by night. It was excavated to provide for a underground carpark. Today, the underground carpark has been converted to the Raffles Place interchange for the MRT trains. I thought it looked so charming back then, with the surrounding colonial buildings.

We used to stay a couple of streets away in Cecil Street, along the row of shop houses, where the present day Prudential Tower is, facing the multi-storey Market Street Carpark. That was my father in his younger days overlooking the veranda down Cecil Street. My grandparents, my parents and I were staying in a little unit about the shophouse. We were one of many units squashed in the space, sharing a common kitchen and bathroom/toilet. I remember our neighbour who is also our relative, was staying at the next unit with his family of 8 children. Even my paternal great grandmother was staying in another unit. My mom said she had to get up really early each morning at 5am. Before she went to work, she had to prepare lunch for my grandparents and she also had to drag me out of bed just to bathe me. 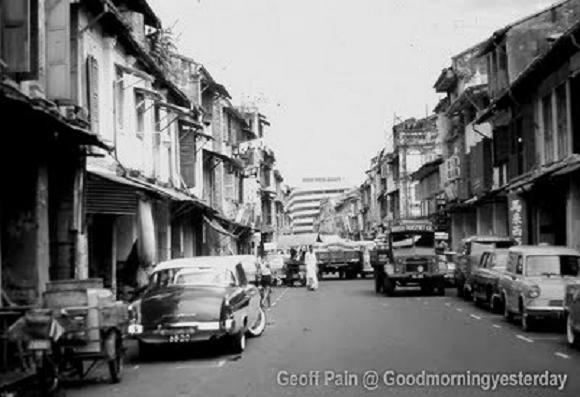 My grandpa used to bring me jalan jalan around the neighbourhood as well, probably around Telok Ayer Street, Church Street and Market Street. I remember only rows and rows of shophouses along the bustling streets. I recalled indian coolies carrying large gunny sacks of spices and uploading/downloading the lorry. I still remember them vaguely because of the smell of spice, as their shop was just below our shophouse unit.

Then we would have our lunch or snacks from these street peddlers along the little lanes, sitting by the roadside. Sometimes my parents would bring me to have dinner there. There were plenty of stalls but I only remember fried dark noodles which looked so black, and which must have been really delicious. I do not even remember what I ate at home in those days. 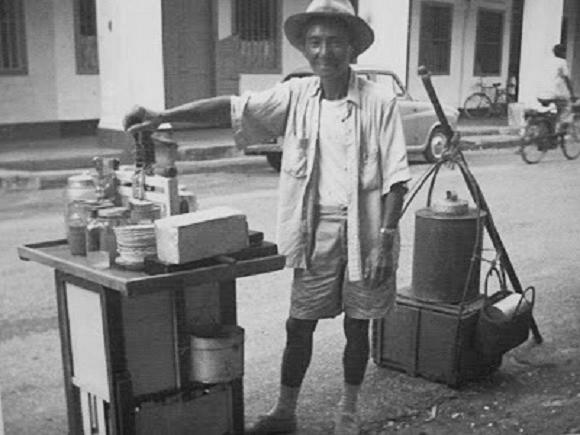 At times, we also got our food from the mobile street peddlers who roamed the streets and residential areas.. Striking a small bamboo stick, they went "tick tock tick tock, tick tick tock...". My father would shout to the peddler downstair when he wanted to order, then father would bring our own metal plate, passed it to the peddler who would cooked the dish on the spot, fresh and steaming hot. It could be char kway teow, or wonton noodles or even Indian rojak, I don't really remember. And a plate costs around 20-30 cents each. 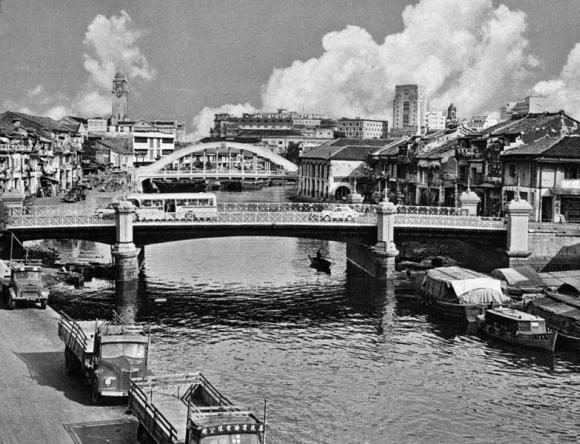 I vaguely remember my parents bringing me for strolls nearby, along the Boat Quay or Clarke Quay areas. I specifically remember those stalls along the Singapore River which were crowded during the weekends. Everything seemed so idyllic back then, even the wind by the river smelled nicer somehow. 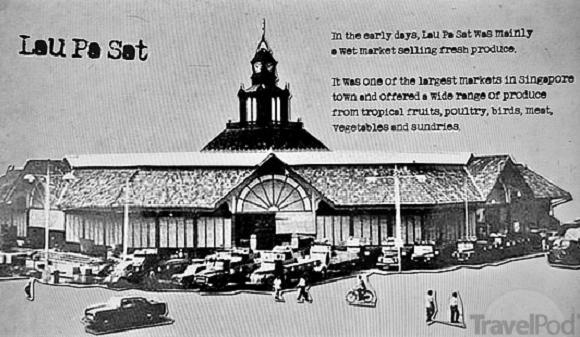 Another landmark I remember was grandpa or father walking me to the former Lau Pa Sat. It was really an old market then, which was wet and dirty and full of people. I recalled the high ceilings. There, we were having Indian rojak or kambing soup. 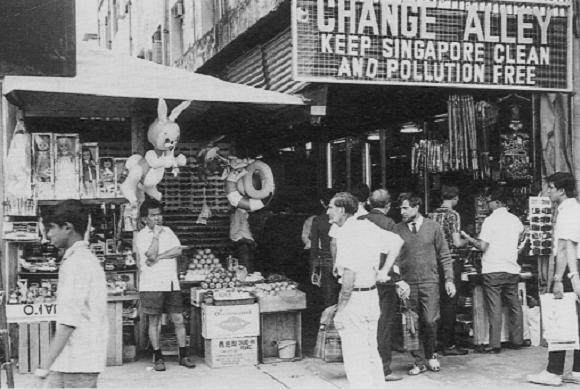 Back to Raffles Place, there was Change Alley with small shops selling all kinds of products.. It was a busy business area where many foreign visitors were seen as well.. Unfortunately I do not recall anything special in this place. 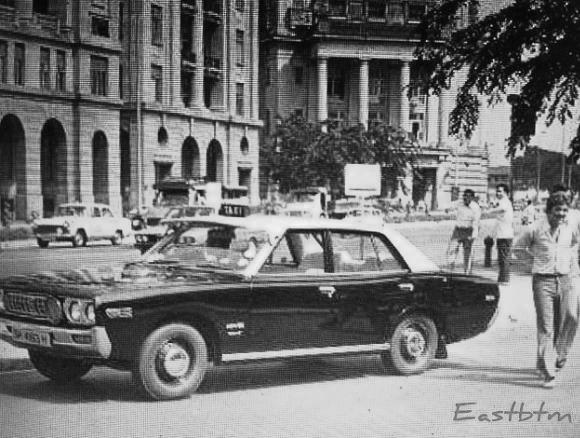 Crossing over Change Alley, there was Collyer Quay. Here was a black and yellow cab in those days, a Nissan/Datsun model. Such a charming car. We did not take cabs in those days so I do not have any particular memories of the old cab. We used to take long bus rides from our place in Cecil Street to the old Sixth Mile Stone in Hougang to visit my Teochew maternal grandma and sister during the weekends. At times my uncle, my mom's brother would fetch us back home in his lau pok car. My grandma used to babysit my sister while I was looked after by my Hokkien paternal grandpa in Cecil Street. So we only met up during the weekends. That explains why my sis converses only in Teochew to my grandma and parents while I spoke Hokkien to them even though I know both dialects. 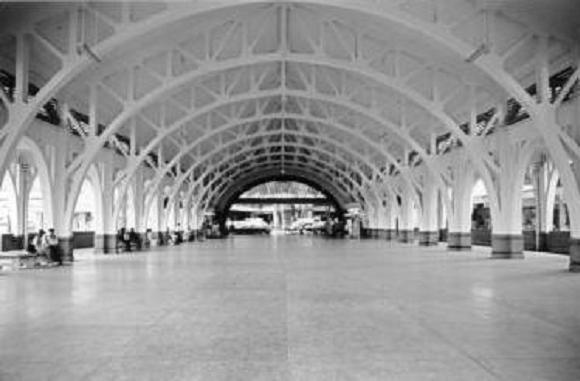 My only memory of Collyer Quay. Don't even know what we did there in the first place. Only a couple of mama stalls selling sweets, snacks and cigarettes. 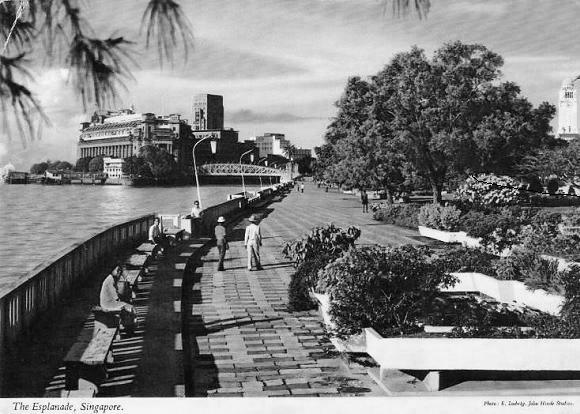 I do love my strolls to the old Esplanade, before the waters were reclaimed further out where the Merlion is now. The former position of the Merlion and its little Merlion was just a small area at the end of the long stretch of The Esplanade, which was known as Queen Elizabeth Walk. In those days, I thought the Merlion looked a little pathetic and wondered what the big hooha was about it. 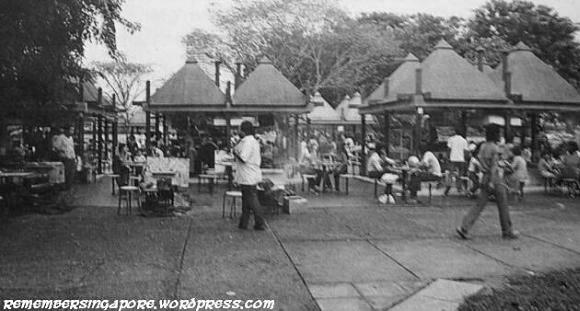 Synonymous with Queen Elizabeth Walk Promenade was the popular Satay Club. I think my memories of certain childhood places are always connected with food (oh dear). My parents used to bring me to Satay Club for satay, of course. All the Indian stall holders were shouting loudly all competing for business promoting their satay, while cooking and fanning their satay sticks on the open air grill. The air was filled with smoke and sweet smell of BBQ satay, overlooking the sea. 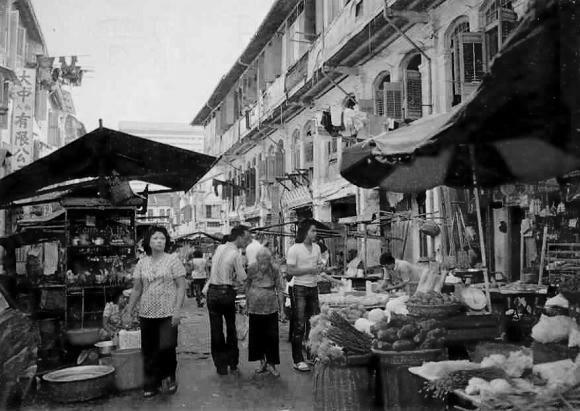 The other place I tagged along when I was a baby or little kid was Chinatown. Yes it was within walking distance from Cecil Street (strange that everywhere seemed to be within distance from home in those days). The streets in Chinatown were crowded with stalls selling fresh produce in the open. The floor was wet and dirty with puddles of black dirty water in potholes. 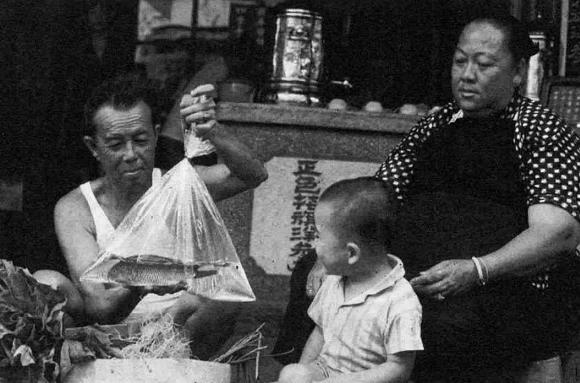 I did not like it there because of the live animals they used to sell in those days. There were live fishes, frogs, chicken, crabs etc... everyone used to buy everything fresh and alive. All the animals were caged up and I saw chickens being sold alive or being slaughtered on the spot. I particularly remember live snakes being skinned alive and hanged up with its different parts ie. skin and flesh. There was blood everywhere on the floor. That explains why I remember the dirty black waters. I did not like visiting Chinatown not because the kiddo me knew anything about compassion towards animals then but because my memories were only of the air being filled with smell of fresh blood and the sight of dirty black waters. 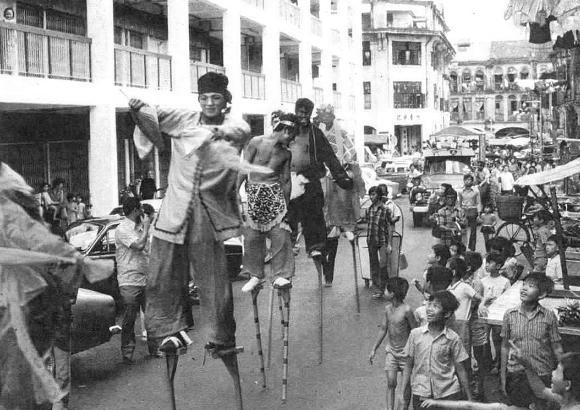 Another nostalgic memory was watching procession during Chinese New Year or on special occasions where there were stilt walkers parading the streets and amusing the crowds. Sometimes I felt they looked eerie. Then I always wondered what happened if they needed to pee urgently while on their stilts. 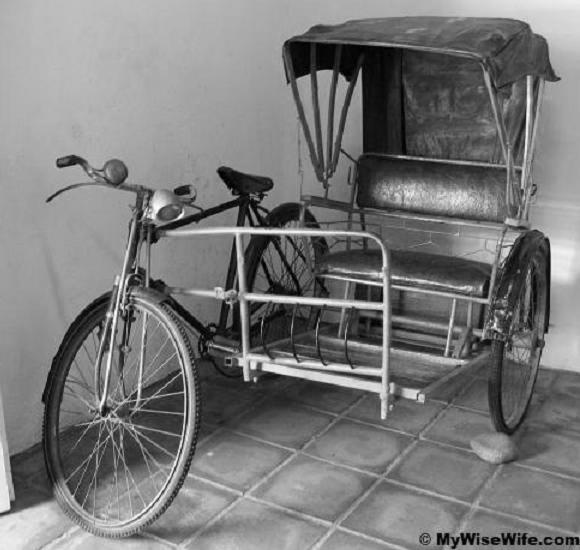 Last but not least, I used to be fetched to school in a trishaw. The trishaw uncle was very dark and tanned and a very lovable old man who stayed nearby. I have such fond memories of this mode of transport but nowadays, the impression of the trishaws working in groups and fetching tourists kind of tainted my sweet memories of my childhood trishaw days.
"Good morning yesterday. You wake up, and time has slipped away.
And suddenly it's hard to find, the memories you left behind.
Remember. Do you remember?"
- Paul Anka, Times of Your Life
yours truly, STUMPBO @ 2:56 pm

Email ThisBlogThis!Share to TwitterShare to FacebookShare to Pinterest
Categories My Thoughts, Photography, Stories