A special boy with autism

Around lunch time on a Saturday, I was at the market near my house having a bowl of congee from my favourite stall. Just as I was eating halfway, a tall and thin boy startled me by plopping his haversack on the chair next to me at the same table. He remained standing looking around at the stalls. I was a little suspicious as the tables around me were empty and I wondered why he had to sit next to me. 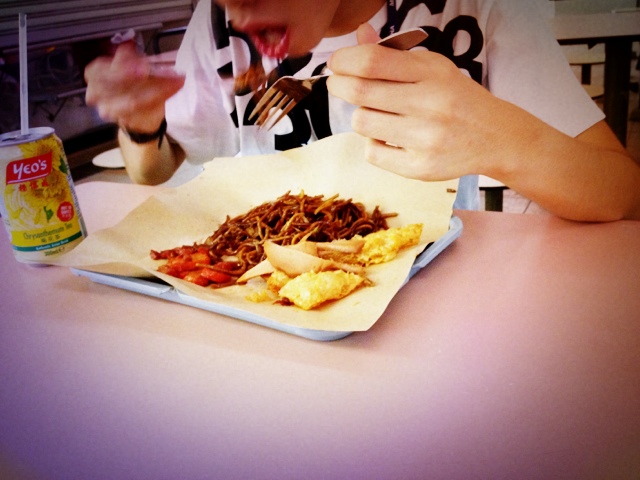 Then he started to point to the vegetarian stall and told me, "I want to eat noodle soup!" but hesitated and stood there without moving. He asked if they were selling noodle soup. Being a typical skeptical Singaporean, I began to wonder if this teenage boy was going to ask me for money next to buy food. I told him he could go and check with the stall holder.

Then he took a few steps and came back. He sounded a little irritated, "But I don't know how! Come!" It was then I realised he was wearing a tag over his neck and I knew he was a 'special' child. I told him I would accompany him to buy food.

While we were still queuing, suddenly he became anxious. "Oh I forgot my wallet! In my bag!" I told him it was ok, I would queue for him. He ran back to the table to get his wallet.

Then he suddenly quipped, "Thank you very much. I like you, because you are very nice," without much expression and no eye contact. His gaze seemed so far away.  I was a little shocked yet touched by his words. So I just smiled at him. I asked if he was staying nearby. He said he came from Ang Mo Kio which was where his school was. When I asked where he stayed, he replied it was in Bukit Panjang. I said that was pretty far from this market, he replied he was here to see his doctor. I asked if he knew the way home afterwards. I learnt his mom would be meeting him at the clinic shortly.

I asked him what side dishes he would like with his bee hoon. He said, "I want char siew!" and then "I want the fried beancurd stick!".  I asked him if there was anything else he wanted.  He took out a few notes from his wallet, "nevermind, I scared not enough money."  When our turn came, I ordered for him (he seemed so relieved he did not need to do it himself). I asked the Aunty to add 'luncheon meat' for him as well, on top of the other ingredients. The Aunty also gave him a slightly bigger portion.  It only cost $2.  I paid for the boy.

We got back to the table.  I asked if he needed a drink, he stared at my can of Kickapoo. I told him to go see which drink he would like to have. He stared at the fridge for quite a few minutes then he ran back to our table again.  "But but, they don't have the drink I like! You come see!"  I think he was scared to order by himself again.  I was right. When I opened the fridge and asked him to choose, immediately he chose a can of Chrysanthemum.

While eating, he told me he is 19 years old. I asked him how long he has been a vegetarian. He replied "when I was 6 years old!". To emphasize his point, he looked around and pointed to a little boy, "like that boy, small small, 6 years old."  I told him that was very good, and asked him why. He could tell me, "because some God tell my mother I must be vegetarian! Cannot eat meat!".  I asked if he is a Buddhist.  He did not seemed to understand what is a Buddhist.  I asked if he is a Christian. He paused again, and said he has to ask his mother. I told him it was ok.

After our lunch, I walked him to his clinic and bade him good bye.  Inside me, I felt extra light and a certain great joy which I am unable to describe, a stark contrast from the frustrated and extremely sad mood I felt from the previous day. I guess I have to thank this special boy who appeared and made me realise how lucky I am. He must have a great mother and a supportive family.

No matter how life throws us knocks and bumps, there are many others who are less fortunate than us, and yet they are living life so simply and happily, so contented. I need to learn a thing or two from this special boy - gratitude. May he be well and happy.

Happy mothers day to all and may all mother sentient beings who have been my mother since beginningless times be free from samsara and suffering, wherever they are.