When Guru Rinpoche was born on a lotus, he announced, "My purpose is the act of destroying disturbing emotions."

Today (10th day of the 5th month in Tibetan calendar) is the birthday of Guru Rinpoche (Padmasambhava 蓮花生大士). I really like and respect Guru Rinpoche a lot as I find that I have an affinity with him from many occasions. Although I have not received extensive teachings about Guru Rinpoche, I just have immense faith and great respect in him. Maybe this affinity with him is the result of past lives' connection. 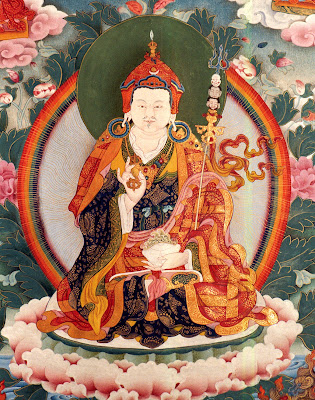 Here's a brief biography of Guru Rinpoche and his 8 manifestations.

Before passing into Nirvana, Buddha Shakyamuni announced the coming of the second Buddha, the great Guru Padmasambhava. Buddha Shakyamuni prophesied that Guru Rinpoche is inseparable from Him and will be His own manifestation.

From "In the Immaculate Goodness Sutra", it states:
The activity of all the Victorious Ones of the ten direction
Will gather into a single form
A Buddha son who will attain marvellous accomplishments,
A Master who will embody Buddha’ activities
Will appear in the North West of Oddiyana.

The "Tantra of the Perfect Embodiment of the Unexcelled Nature" states:
Eight years after I pass into Nirvana
I will reappear in the Kingdom of Oddiyana
Bearing the name Padmasambhava
And will be the Lord of Secret Mantra.

In the "Tantra of the Ocean of Ferocious Activity", it is said
A Holder of the Deeds of Indestructible Wrath
A miraculous One without Father or Mother
Will appear as a Vidyadhara
In the Lake of Kosha in Oddiyana.


As prophesised, Guru Rinpoche appeared spontaneously from a lotus flower in the Lake of Danakosha as the manifestation of Buddha Amitabha who sent forth light rays from his heart into a thousand petalled lotus bud to tame the beings of this world. As the bud ripened, an amazing 8-year-old child appeared adorned with all major and minor marks of Buddhahood. The religious minister of Oddiyana Trig na Dzin, who was looking across his childless master’s kingdom for a suitable heir to the throne came upon the apparition and promptly related his discovery to the King.

The king gave him the name "Lotus Born".

Later, he ascended the throne and ruled the kingdom in accordance with the Dharma, he was then known as King Thorchokchen. He soon realised however that he could not serve the purpose of beings by remaining on the throne. He beheld Dorje Sempa with a retinue of 72,000 Bodhisattvas in pure vision, urging him to renounce the Kingdom, but his father did not let him do so. He freed himself by pretending to accidentally let a trident slip from his hand as he was performing some ritual dances on top of the Palace and killed the son of an evil minister. According to the Law of the country, he was then banished to the charnel ground of Sitavana for punishment. There he opened the Vajra sphere Mandala and obtained attainment in seven days.

1. Guru Rinpoche renounces his kingdom, practices yoga and meditation in the great charnel ground of Sitavana, [Cool Grove] and attains liberation. Gathering under him the matrikas and dakinis, he is known as Guru Shantarakshita: Guardian [Protector] of Peace.


2. Guru Rinpoche receives rabjung ordination from Buddha’s favourite disciple, Ananda. He shows unparalleled understanding and mastery of both sutra and mantra, and is known as Guru Shakya Senge [Lion of the Shakyas] and, Guru Loden Choksé.

3. The king of Zahor tries to burn Guru Rinpoche alive. But he transforms the fire into lake Rewalsar [tso- pema] which is located in Himalchal Pradesh in India and establishes the Dharma in the land of Zahor, taking Mandarava as his consort. He is know as Guru Chimè Pemajugnè [Immortal Lotus-born].

4. When Tirthikas [disputing philosophers] from South India attempt to harm the Buddha Dharma, Guru Rinpoche with his great power vanquishes them along with their gods and guardians. Raising the Victory Banner of the Dharma, he is known as Guru Sengé Dradok- the Lion’s Roar.

5. Birth of Guru Rinpoche, Guru Rinpoche Day: At sunrise Guru Rinpoche is miraculously born amidst dazzling radiance in a lotus bed on Lake Danakosha. Turning the Wheel of Dharma for the dakinis, he is know as Guru Tsokyé Dorje – Guru, the Lotus-Born Vajra.

7. Guru Rinpoche takes the form of Vajrakumara at Yang Leshö in Nepal, and subdues the local deities and negative forces. He performs the sadhana of Palchen Yangdak and atttains the Vidyadhara stage of Mahamudra realization. He is know as Guru Dorje Tötreng- Vajra Guru, Garland of Skulls.


8. Guru Rinpoche arrives in central Tibet. He subdues all the hostile negative forces, founds the great monastery of Chö-Khor Pal-gyi Samyé and lights the lamp of the Holy Dharma of the Sutra and Mantra teachings. Guiding his 25 disciples and the king to liberation he is known as Padmasambhava, the Lotus-Born Guru.

Guru Rinpoche left many imprints of his hands, feet and even head in holy sites of Bhutan, Nepal and Tibet. Innumerable students received transmissions directly from him and many male and female practitioners attained the rainbow body.

Guru Rinpoche left for the realm of the cannibals to the South west where he liberated the king of the rakshas, raksha Throden and assumed his form. He still dwells there, taming the beings and preventing them to harm humans on the Jambudiva continent. It is said that he will reappear at the time of the future Buddha Maitreya under the name of Drowa Kundul and will spread the secret mantra vehicle there once again.

May I be able to receive teachings in future when Guru Rinpoche reappears as Drowa Kundul.