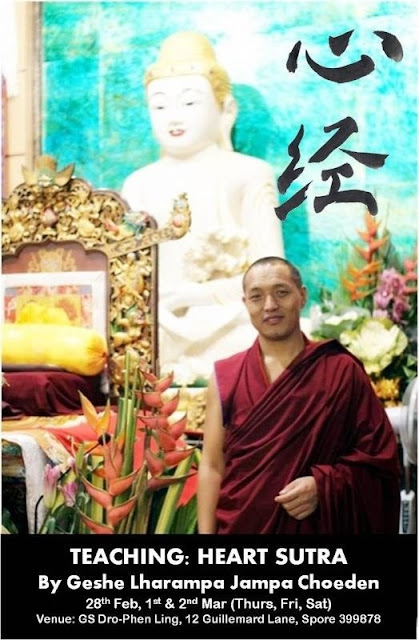 One of the best teachers from Gaden Shartse Monastery, Geshe Lharampa Jampa Choeden is here in Singapore and he will be giving a teaching on Emptiness - Heart Sutra, starting tomorrow for 3 days.

Geshe Jampa Choeden was born in 1969 in the region of Dagyab in Tibet. At the age of 9, Geshe-la enrolled in the prestigious Gaden Shartse Monastery, one of the three great monasteries in Tibet. As a young monk, he engaged in the memorization of texts and was very diligent in his studies. Geshe-la’s main teachers were the late Khensur Rinpoche Jampa Yeshe, as well as the esteemed Khensur Kyabje Lati Rinpoche. Apart from his two main teachers, Geshe-la also had 5 to 6 other teachers at the same time who trained him in debate.

Geshe-la completed the studies of the Five Great Treaties - which encompassed the elaborate study of more than 100 volumes of important Buddhist classics and sutra texts. Geshe-la emerged top amongst many other great scholars. At the young age of 33, Geshe-la received his Geshe Lharampa honorary degree - the highest honorific title in Buddhist monastic school (comparable to PhD in universities) - after which, Geshe-la advanced to study in Gyuto Tantric Monastery  and graduated with a ‘Geshe Ngarampa’ degree, with highest honours once again.

Over the past 10 years, Geshe-la made great contributions to Gaden Shartse Monastery especially in the area of education. In 2006, Geshe-la was nominated to undertake the role of ‘Debate Supervisor’ whereupon it was his responsibility to teach and guide all monks in daily debate, a very important subject in the monastery. Geshe Jampa Choeden was also selected to be one of the ‘Main Examiners’ of the critical 6-year Gelug examinations – he had undertaken this important role for 4 times now. Geshe-la had also been selected as ‘Main Debate Teacher’ for the important annual scholars meet – ‘Jamyang Gonchog’ Debate Seminar - organized to bring together all distinguished scholars of the 3 great monasteries (Gaden, Drepung and Sera), to learn from one another.

Geshe Jampa Choeden is an extremely outstanding Buddhist scholar. He is also very passionate about teaching, and spends most of his time teaching the younger generation of monks. Geshe-la is also the Spiritual Assistant to high lama reincarnate, His Eminence Zong Rinpoche.