The abyss of the lost and make-believe

Chanced upon the below excerpt today by Sogyal Rinpoche in 'Tibetan Book of Living & Dying' and I suddenly realise in a certain way how relevant it is to the situation I'm faced with: 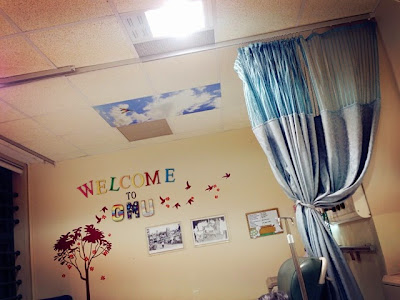 "Imagine a person who suddenly wakes up in the hospital after an automobile accident to find that she is suffering from total amnesia. Outwardly, everything is intact: She has the same face and form, her senses and her mind are there, but she doesn’t have any idea or any trace of a memory of who she really is.


In exactly the same way, we cannot remember our true identity, our original nature. Frantically, and in real dread, we cast around and improvise another identity, one we clutch with all the desperation of someone falling continuously into an abyss. This false and ignorantly assumed identity is 'ego'."

We are just like the person who is suffering from total amnesia. Although the physical and mental forms appear so real, we totally cannot find or recognise our true nature.

If we, normal abled beings, are often blinded by what we think as real while the actual reality is far from it, how then is a person who has lost partial of his mind be able to find his true nature?

That person is my father.

My father is hospitalised again, more than a month after he was discharged from brain injury due to a fall. The doctor has previously warned that patients with brain injury, even if their condition improves and does not worsen, they may never be able to function as normal as before. The condition can only deteriorate with age.

The A&E unit has become my father's best friend and my enemy. It's a place I frequented recently and which I dread to visit. My father has met with a few other ailments after his discharge. He had significantly weakened in his movements compared to last time. He could not control his bowels properly which was pretty inconvenient when we were out. This led to an urinary tract infection a couple of weeks ago. And because he was not feeling well with a bloated stomach and swollen legs due to this UTI, his appetite was affected. He was eating very little or totally skipped his meals.

Then last week he became dazed and couldn't get out of bed to have dinner. While he was not unconscious, his opened eyes seemed far away when I looked at him and he could not reply or speak. We called the ambulance and in we went into the A&E again.

It turned out his sugar level was precariously low at 1.2 and his high blood pressure shot up to 180. The nurse warned if we had delayed sending him in, he could have gone into a coma. His condition was so dangerously risky even though he woke up immediately with a glucose jab.

From then it seemed his random moods and extreme behaviour came back. From being incoherent to highly suspicious to agitated to paranoia to aggressive to being deranged at times.  He is currently under medication to calm him down. When he is in a calm state, he is smiling and laughing and talking non-stop. Or he goes totally quiet just lying in bed.

These exhibits of extreme behaviours are far from his usual self. We wonder if he will regain his memory or at least recover his normal mind. At times, I wonder is it better he remains in this silent and blur state, in a world of his own. Or is it better for him to remember everything and be back to his grouchy and worrying (at times agitated) character. Because no matter what, it is medically understood that he will never return to his normal self again. It's a dilemma.

That is why the above excerpt resonates with what I'm thinking and feeling right now. Will we ever find our real identity, our true nature, when we are always holding on to a make-believe identity in which we assume we possess our entire life? Or is it better to temporarily lose our identity, be unaware of our physical and mental suffering? Whether it is make-believe or lost identity, the longer our true identity eludes us, it is akin to swimming in this abyss called samsara.

Between our seemingly perfect (make-believe) world and the lost world my father is in, we are in fact no different.