The Korean Demilitarized Zone is a strip of land which divides North and South Korea. It cuts the Korean Peninsula roughly in half, crossing the 38th Parallel on an angle and is the most heavily militarized border in the world. 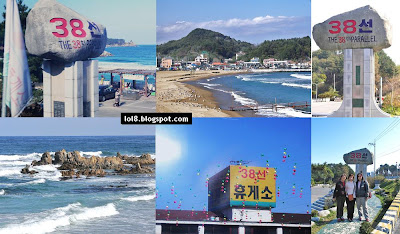 We were at the 38th Parallel. The surrounding seemed peaceful and the view of the ocean was great, a very cool blue. I didn't feel any intense animosity between the North and South when standing at the border. It was more like a seaside resort with many pigeons. 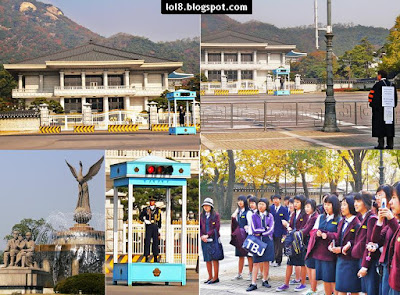 Next we passed by Cheongwadae (also known as the Blue House or presidential residence). The blue tiles of the main building and roof are in beautiful harmony with Mt Bugaksan behind it. Geomancers said Cheongwadae is located at an auspicious location. The north of Cheongwadae is the mountain Bukhansan, flanked by two mountains (left is Naksan symbolizing the Blue Dragon, and right is Inwangsan symbolizing the White Tiger). To the south is Namsan, the protective mountain of the capital. In front flow the Cheongyecheon stream and Han River.

We happened to see a man outside the Blue House in some sort of silent demonstration. He looked like a learned man or professor. And a group of cute school girls were also snapping photos of the Blue House. 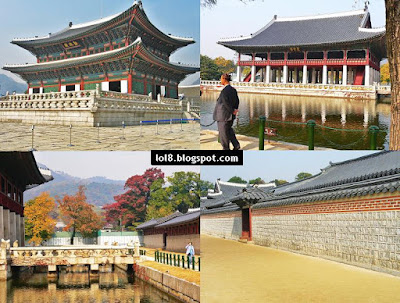 Nearby at the heart of Seoul city, was Gyeongbokgung Palace, the main palace during the Joseon Dynasty (1392-1910). One of five palaces in Seoul, it has a 600 year history. Inside the Palace was a hall surrounded by the lake, called Gyeonghoeru Pavilion, which is the largest elevated pavilion in Korea. It is a hall used to hold important and special state banquets during the Joseon Dynasty. It is a considered Korea's national treasure. 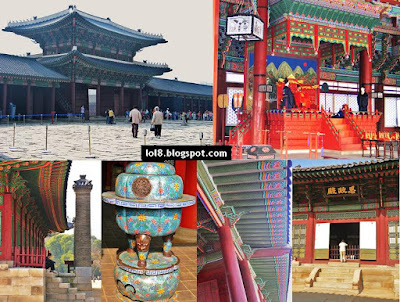 Gyeongbokgung Palace is huge, 5.4 million square feet. It was so huge that we only managed to visit Geunjeongjeon (Throne Hall), the main hall, where the King held inquiries and received foreign envoys. No time to visit the remaining 16 different buildings or Halls. 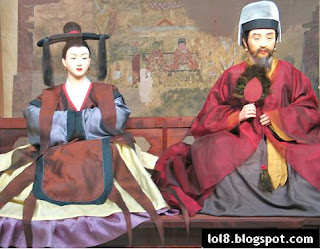 I wonder how did the palace people walk from one hall to the other hall in the old days? So FAR!!! Only the Kings and Queens had the luxury of staying inert in one place most of the time! 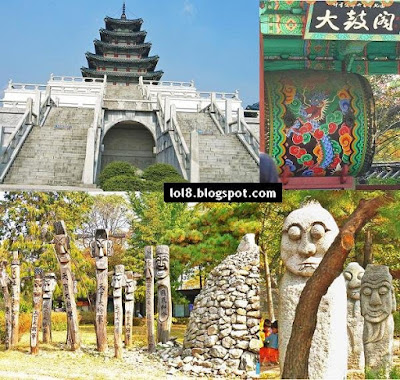 This is the National Folk Museum. There are 20,000 vestiges, with a total of 4000 folk relics. There are traditional culture or folk related exhibits, depicting the lifestyles of Koreans from pre-historic times to the Joseon Period (1392~1910). 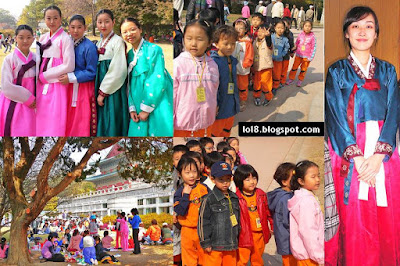 I took pictures with this bunch of Korean girls dressed in their traditional hanbok. There were many school children who were on excursions too, as the park outside the musuem was filled with kids picnicking under the trees. The kids were so adorable looking, with chubby pinkish cheeks. And the lady on the extreme right was the leading performer in a cultural dance we watched. I managed to pose with her as well. I swear she looked prettier and definitely more charming in person.

Email ThisBlogThis!Share to TwitterShare to FacebookShare to Pinterest
Categories Travels