I tried this simple Teochew noodle stall along Sam Leong Road and it was spectacular. I am usually not a big fan of fishball noodles (I prefer Bak Chor Mee) so this caught me by surprise.

I ordered the dry version of kway teow and yellow noodle combination, with a little chilli. I do not like too much chilli added as I do not want the dish to be overshadowed by spicy chilli (unless the food is that bad). I wanted to taste the original flavour. For $2.50 a bowl, they were really really generous with the ingredients - fishballs, pork slices, fishcake, fish dumpling, beansprouts, lettuce, mushrooms, and EVEN slices of fried salted fish! 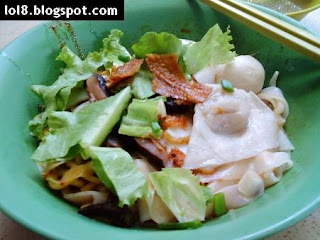 After mixing the noodles and ingredients, the first taste was heavenly. I am the type who rarely order fishball noodles outside because most of the time it was mediocre. So for me to actually like this one, it was really good. The fishballs were not as crunchy as some stalls, but they were homemade because they were real soft, light and juicy. There were many slices of mushroom and fishcakes. I was so impressed and preoccupied with eating the noodles that I forgot to drink the soup. 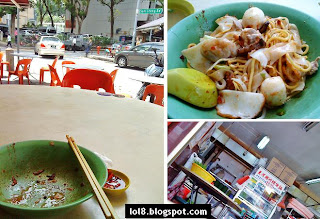 This Teochew noodle stall won me over, hands down. No wonder they were rated highly by TV food program as seen in a poster in front of the stall. They are in a corner coffeeshop called Kim San Leng coffeeshop, and the stall name is 阿河 (Ah He) Teochew Noodles. Try them if you are nearby!