A flavour of HK

Met a friend for a very late lunch at 3pm. Didn't know where and what to eat so ended up in Central HK Cafe for a simple bowl of soup noodles which cost $5.00. Ordered the Trishaw Noodles 车仔面, which originates from Hong Kong in the 1950s as it was many mainland immigrant workers' staple food. 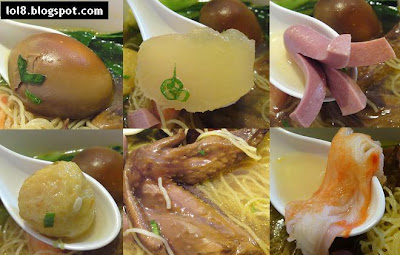 So what's inside the Trishaw Noodles? The noodles in a clear broth tasted refr

eshing. The noodles were not particularly chewy QQ as I would like it to be. Inside the bowl was a hard-boiled herbal egg which was very nice as the taste of herbs had permeated the egg. There were 2 big pieces of white radish which was my favourite, soft and nice. The sausage was cut up like a flower petal (I am not crazy over sausages and I don't understand why HK people like to include sausages into their noodles). This was something like a fishcake ball. The braised chicken wing was very nicely done with soya sauce, tender and soft. There was crabstick as well as some leafy veggies. Was the trishaw noodles here authentic? I'm not sure.

And since I was in a HK cafe, I had to order their Iced Almond Milk Tea which was shiokalicous. Ok, enough of soup noodles for the next few days.
yours truly, STUMPBO @ 6:07 pm