After a meeting, I met a friend who bought me lunch. We were at City Hall and was passing by Peninsula Plaza when we decided to try Myanmar food in Inle Myanmar Restaurant. I am more familiar with Thai food, and I think I have never tasted authentic Myanmar cuisine before. So it was a good opportunity to try and a refreshing change from the usual western/chinese/japanese fanfare. 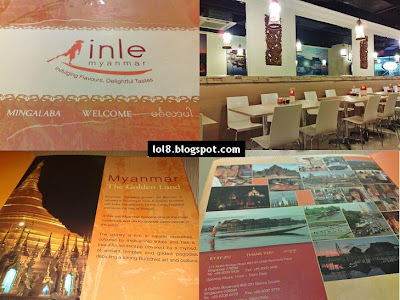 For a simple and small restaurant moderate in decor, the menu was quite impressive. It was thick and laminated and even have pictures and introduction of Myanmar, some of its cuisines and language. They have rice set lunches that only cost $6.50 each and comes with rice, one main dish, soup as well as a drink. Noodles alone there were almost 20 types of noodles cooked in different ways, like Seafood Glass Noodles, Fried Kway Teow and Vermicelli and lots of others with Myanmar names. Was so tempted to try their famous traditional noodle dish called Mo Hin Ga served with thick fish soup and thin rice noodles. There were also many rice dishes to choose from, salads and ala carte dishes. 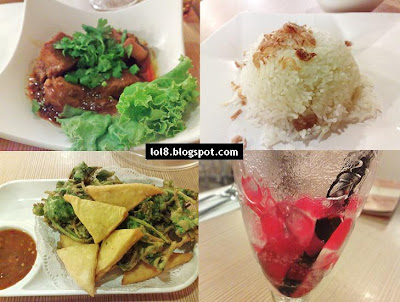 In the end, I chose the Butter Rice with Myanmar Pork Curry. For an additional side, I ordered the Crispy Pennywort Fritters and Tofu. You could call a bigger portion which also include crispy gourd fritters and onion fritters. Wow, all sounded so foreign to me.

The butter rice was like plain rice, I thought, not as fragrant as I imagined as it was supposed to be Butter Rice. The Myanmar Curry Pork was a dry curry dish with lean pork. It was not as tender, maybe because it was lean meat. However the taste was good, only wished the food was warmer.

The crispy pennywort turned out to be a good surprise. It was a type of green vegetables deep fried, like tempura veggies in Myanmar style. It was really good as Pennywort has a little herbal flavour (it is NOT mint, because I don't like mint). The crispy tofu was just tofu mashed into triangular shapes. You must dip all these with the sweet sour spicy sauce which was quite unique. I also tried their traditional Myanmar drink Saykalama, which was actually bird nest drink with pink jelly cubes.

Incidentally, Inle is named after Inle the fishing village floating over a beautiful lake in the hilly 'Shan' state of Myanmar, which is often described as the Venice of Asia.

Inle Myanmar restaurant is located at the basement of Peninsula Plaza and there is another bigger branch in Marina Square. I would go back with the family next time, so that I could order more unfamiliar dishes to try. There were so many dishes that you would be spoilt for choice. Kyay-su (thank you)!