Meeting the pink one

Since school holidays are coming to an end, one of the days, we went Sentosa specifically to visit a special dolphin. We reached the Dolphin Lagoon exactly on time before the show began. The slight drizzle did not dampened our mood. In fact it was great since it was not hot at all! We were there to catch a glimpse of the rare PINK Indo-Pacific Humpback Dolphin performing their natural behaviors such as spyhop, tail -flapping, vocalizations, dancing on waters, tail-walking. It was hard not to like the 2 cute dolphins, especially the pink one.

This was the beautiful, highly intelligent pink dolphin. The kids loved her. She looked like she was smiling all the time, right? 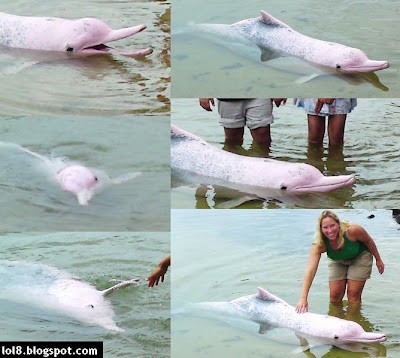 After the show, we stayed behind, as next was to get up close and personal with the dolphin. Those who paid an extra $15, would be able to sayang the dolphin and to take a photo together all for a mere 5 seconds. The kids did not want to go into the water although I kept prodding them to (maybe they didn't want me to spend too much money). It was still fun as we were really close to the dolphin.

Niece and nephew did managed to have a few shots with the lovable pink dolphin. It was an unforgettable experience for them as well as some little souvenirs from the dolphin store.