Ever so often, we get entrenched in our own lifestyle, pursuits, beliefs and (character?) that, there comes a time when the line is blurred, really tainted. The word is again nothing but 'respect'. 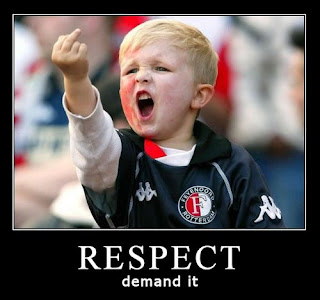 __/\__  Respect and accept that the one next to you is not of the same religion as you, so don't keep inviting him/her to your church gathering/party/TGIF get-together/Good Friday party or whatever you name it. Don't be sneaky, especially to sick elderly people who doesn't even recognise you anymore, much lest hear you preach.
__/\__  Respect your fellow Buddhist friends. You may share the same religion, but that doesn't mean you can enter someone else's place and behave disrespectfully towards their  place of worship or altar or gompa. It is not your house. Respect their space.

__/\__  Respect that your best friend is of a different religion as you. Do not pepper your speech and conversations revering your God all the time, "it's from God's grace that I....", "Praise the Lord that I am...." etc... You won't like it if I say "It was the Buddha who helped you".
__/\__  Respect that someone may not be as rich as you. There is no need to flaunt your 5 Cs and whichever C. Just donate more to Charity and be humble.
__/\__  Respect that someone whom you have a crush on does not like you. Move on and don't spread the word that he/she is an abhorable person when it is only one-sided. You deserve someone better than this person. So does he/she.
__/\__  Respect and remember that person who had ever lent you a listening ear, a helping hand and who had lifted you up when you were downtrodden and depressed at the lowest point of your life.

Last but not least, practice Self-Respect. Love your looks.  Love your body. Believe in your knowledge. Believe in your dreams. Treasure your achievements.  Believe in yourself, no matter how others tell you otherwise (sounds a little ironical, but.. there you have it). Treat others as you want them to treat you because what goes around comes around. Karma.
"The best thing to give to your enemy is forgiveness; to an opponent, tolerance; to a friend, your heart; to your child, a good example; to a father, deference; to your mother, conduct that will make her proud of you; to yourself, respect; to all men, charity.” Benjamin Franklin
yours truly, STUMPBO @ 12:14 am