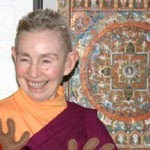 I read this article about an American Buddhist nun who passed away early this year, with miraculous signs. She is Ani Thupten Palchen, whose guru/master is Jetsunma Ahkon Lhamo. Jetsunma herself gained international attention as the first Western woman to be named a reincarnate lama, discovered by the admirable late HH Penor Rinpoche.


Below, I summarised the article from Jetsunma's website.
Ani Thupten Palchen died on Friday, January 8, 2010, at the age of 80. As Tibetan Buddhist practitioners, we have heard stories of seemingly ordinary and devoted practitioners in Tibet who showed miraculous signs at the time of their deaths. 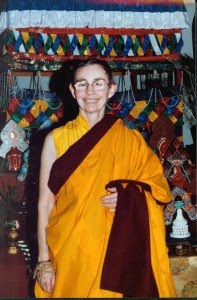 Ani Thupten Palchen’s body was kept in the hospital for 6 days before it was transferred to the crematorium.  Since her body was to be cremated, it was not embalmed.  On the 7th day after her death, 3 Buddhist nuns went to dress her body for cremation.  According to the mortician, nothing had been done to the body other than refrigeration.  No embalming process was used and no make up was applied. The mortician also indicated that the refreshing scent in the room was unusual, especially considering the length of time since Ani Palchen's death and the fact that she had open wounds from a skin graft on her leg and open heart surgery. It was quite unusual for a dead person to be completely without odor and almost unheard of when there were open wounds. As evidenced by the photo of Ani Palchen’s body, Ani Palchen’s face and skin continued to have a natural tone 7 days after her death. These are unusual signs.
According to one of the nuns who went to dress Ani Palchen into her Dharma clothes, and to cover her with flowers and incense, Ani Palchen looked beautiful and so peaceful. The nuns left her after prayers of dedication, extremely happy at Ani Palchen's auspicious transition. 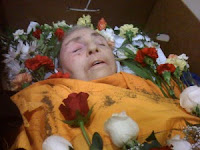 When Jetsunma Ahkon Lhamo heard of Ani Palchen's passing, she immediately went into her prayer room and performed the practice of Phowa for Ani-la at the very moment of her death.  Phowa is a most precious and very precise practice of the transference of consciousness at the time of death. Accomplished Masters such as Jetsunma are able to perform this practice of transference not only for themselves at the time of their own death, but also for sentient beings in order to guide them through the bardo, the state of consciousness after death, to liberation. Ani Palchen was successfully awakened from her death slumber, and guided by Jetsunma to Amitabha Buddha’s Pureland (known as Dewachen).  She was liberated!  This is what all Buddhist practitioners aspire to; this is our goal.
Jetsunma confirmed that this phenomenon occurred because Ani Palchen had been truly liberated.  It was a sign, a true confirmation of her successfully following the Path with complete devotion and faith, and achieving freedom from the suffering of cyclic existence. It was a modern day miracle. There could be no ordinary explanation for the phenomenon that was witnessed at the crematorium.
It is historic. These are signs of Ani Palchen’s spiritual accomplishment through her devotion to her root guru, Jetsunma Ahkon Lhamo. Jetsunma said, “This is wonderful news for people who don’t believe that miracles can happen anymore.” Even more extraordinary, it was a Westerner who had accomplished her practice, and Jetsunma said, “This is proof that liberation in one body is possible! Lineage and devotion are the real deal. A woman accomplished her practice with a woman teacher.” 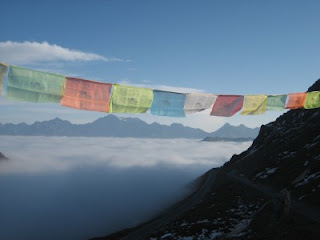 How do we identify the miraculous signs of accomplishment at the time of death?  The signs are described in the following excerpt from a book called an Introduction to Light of Fearless Indestructible Wisdom:
The Dzogchen tantra Blazing Relics of Buddha-Body describes signs of realization observable to others when a great master leaves the body, as well as the meaning of those signs. When a circle of light surrounded by rings appears after death, that individual has reached the ultimate state. When a light goes straight up, it indicates that the individual has instantly reached enlightenment without having to experience the bardo.
When beams of light appear, it means the individual is reaching enlightenment at the end of the bardo..... Furthermore, the complexion of one who has merged the child and mother clear-light luminosity states remains bright; even if the body is left for as long as twenty-five days, it will remain fresh. And fragrances are emitted, more pleasant than camphor, saffron, and sandalwood.


I found a clip of Ani Palchen on Youtube. May all who practice the Path be liberated like Ani Palchen. Om ami dewa hrih!