A few days ago, when my godbro came back to Singapore, I invited him over for dinner at my place. I haven't seen him for a few months. I was wondering what to cook for him and decided on cooking Hainanese Chicken Rice and a dish of Stir Fry Lala Clams. 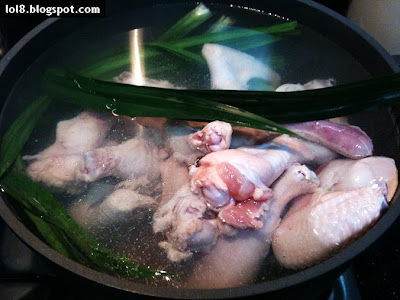 I followed a recipe from a friend who taught me how to cook chicken rice from scratch not too long ago. I bought a pack of chicken thighs and drumsticks as well as another pack of chicken wings.  When the pot of water was boiling, I threw in some pandan leaves and all the chicken pieces, adding a pinch of salt. With the pot covered, I boiled the chicken in high fire for 20 minutes. After that, I rinsed the cooked chicken with cold water and left them to cool/dry. The remainder of the pot of chicken stock was to be used for soup and for cooking the chicken rice later. 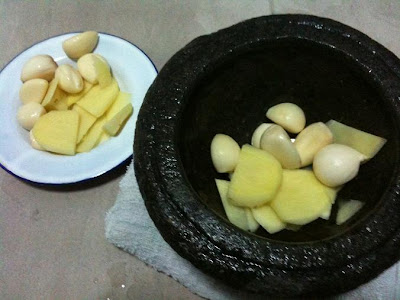 Next, I peeled lots of garlic and sliced ginger, and using my aged mortar and pestle, I pounded them into a paste. 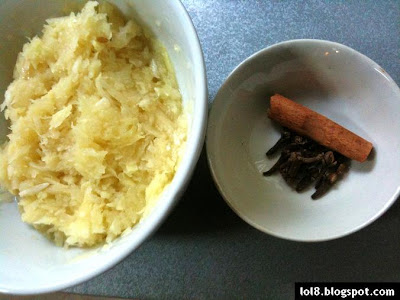 This was the garlic/ginger paste all mixed. And using a cinnamon and cloves and star aniseed (not in photo), I stir fried them with sesame oil in the wok till they became fragrant. 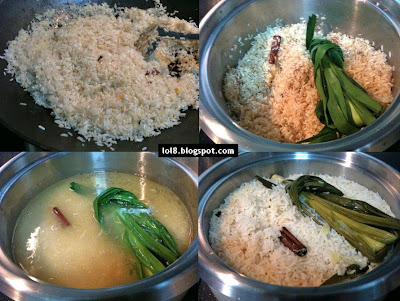 Next I poured in the uncooked and washed rice into the wok and fry them together with the paste, until the rice was dry. Then I transferred the rice into the cooking pot, threw in some fresh pandan leaves, and a little light soya sauce, and filled the pot with sufficient chicken stock.  The last picture was the finally cooked chicken rice, which was very  fluffy and nice, the smell permeated the entire kitchen. 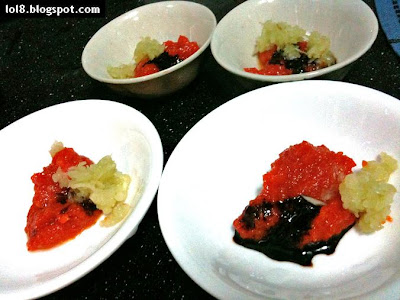 This was the chilli paste I used to go with the chicken. I bought a bottle of the Taho brand chilli, and mixed it with some garlic paste and dark soya sauce. 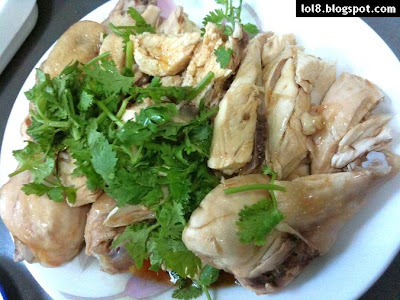 The following photos were my ready chicken meat. I sprinkled sesame oil and light soya sauce and a little chicken stock over the cooked chicken, and garnished with lots of coriander on top.  It smelled so nice! 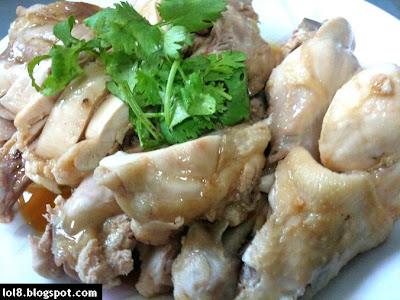 I had 2 big plates of chicken all ready to go with the chicken rice! 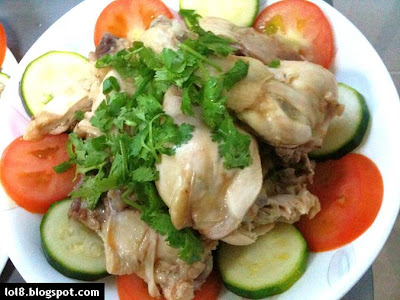 I almost forgot about my cucumber and tomato which I sliced at the last minute. 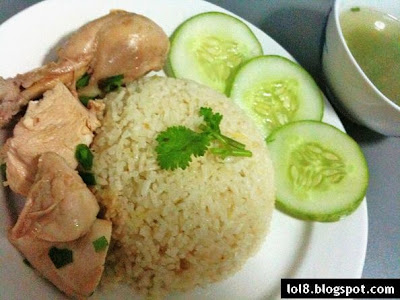 Finally, here was a plate of the completed chicken rice with soup. The soup was garnished with lots of chopped spring onions. Yummy! 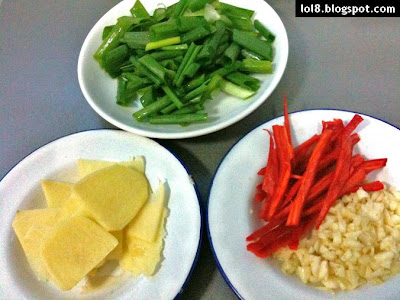 Next I wanted an easy dish. When I saw some lala clams in the supermarket, I decided to whip up this dish. This was the first time I cooked Stirfried Spicy Lala Clams. I chopped some garlic, sliced some ginger, red chilli and spring onions. 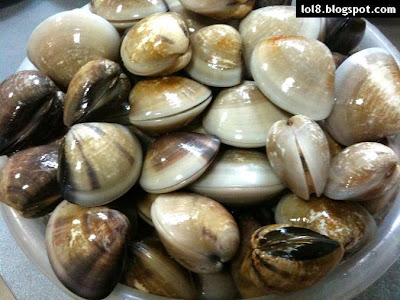 I washed, and rubbed the shelled lala clams with water, and left them soaked in water for 2-3 minutes, before rinsing and changed water again, and repeat till I was sure there was no muddy particles left. Once the shells opened slightly, they spewed out the dirt particles, coughed out the mud inside the shell. 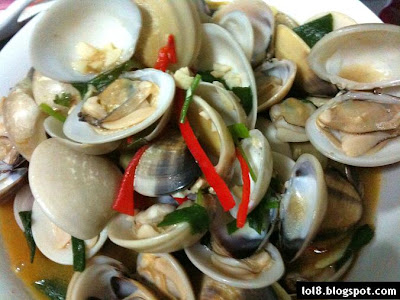 I sauteed the garlic and chilli and ginger slices in hot oil,   As the ginger and garlic became fragrant, the lala clams were added, as well as water and seasoning (salt, sugar, oyster sauce and white wine).  Next the spring onions were added. After stirring well the clams, the wok was covered.  After about 30 seconds, the lid was opened and stirred again, and the process was repeated until the lala clams have opened up, which meant they were already cooked. 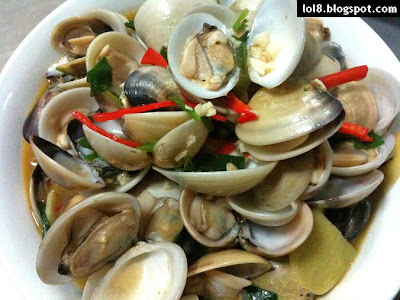 This was my first time cooking Stir Fried Spicy Lala Clams. They tasted ok and shiok. I am going to try a different variation the next time.
yours truly, STUMPBO @ 6:22 pm