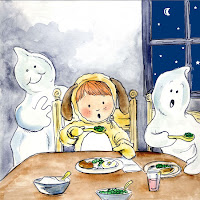 Today is the start of the month-long Hungry Ghost Festival (中元节). Who you gonna call? Ghost-busters?
The lunar 7th month is regarded as the Ghost Month (鬼月), in which ghosts and spirits, including those of deceased ancestors, come out from the lower realm, to visit the living. Both Taoists and Buddhists perform rituals to transmute and absolve the sufferings of the deceased.
Many people have the misconception that because it is the 7th month, the hungry ghosts are out to haunt the humans. It is not exactly true.

Below I summarised an article debunking 7th month myths. 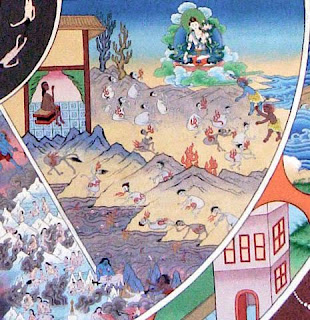 Myth 1: The gates of Hell are opened during every 7th lunar month.
TRUTH: Only beings with very strong negative karma will be reborn in hell. Only when their negative karma is exhausted then will the beings leave Hell to be reborn again. Hence, there are beings leaving hell not just during the 7th month, but anytime, as and when karmically appropriate.
Myth 2: During the 7th month, hungry ghosts from hell roam the world freely as wandering spirits.

TRUTH: There is a difference between Hungry ghosts and Hell beings. Hell beings reside in the hell realm and generally have more intense suffering, and they do not have the privilege to take "vacation" in our world.   What we have in our world are hungry ghosts and wandering spirits, mostly unseen by us humans. Hungry ghosts are reborn beings with strong craving, while wandering spirits are the deceased who have yet to take proper rebirths due to strong attachment. Most ghostly encounters are with Wandering Spirits, and NOT hungry ghosts or hell-beings.
Myth 3: All go to hell after death in the afterlife.
TRUTH: Many Chinese believe that everyone will be reborn in hell in the afterlife, which is seen as a mirror image of our present world. However, only those who have created very negative karma are reborn in hell. There are 5 other possible realms of existence - realm of hungry ghosts, animals, humans, demi-gods and gods. Hell is also not an "interchange terminal" between every two consecutive lives. 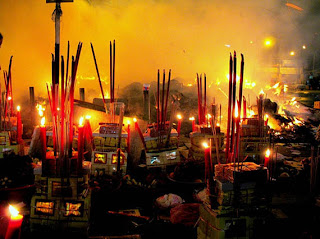 Myth 4: Life in hell requires all the requisites of our world, so we must burn these items.
TRUTH: Since hell is a realm of intense suffering, worldly possessions such as money, houses, cars and handphones would not be relevant. There is no basis that paper items burnt to ashes will materialise into solid items. If life in hell requires everything in our world via burning, we would need to burn the whole world literally, as everything is interdependent for any one thing to function. But to burn absolutely everything is of course highly illogical. Burning expensive paper items not only wastes paper, money time and effort, it also pollutes the environment and can be damaging for health. Ironically, the excess fire, ashes and smoke might displease unseen beings, just as they displease humans who are irritated.
Myth 5: If we do not even burn paper items out of goodwill, we are being uncompassionate.
TRUTH: Instead, we can do good deeds in the name of the deceased, who we believe might have been reborn in an unfortunate realm (or who might still be a wandering spirit), and dedicate merits to them. We can also offer prayers by chanting, in the hope that they may learn the Buddha's teachings from them, thus alleviating their suffering by practising them. Openly sharing and listening to the Buddha's teachings is also meritorious. Food offerings can also be made for hungry ghosts and wandering spirits too. Donating food and necessities to worthy members of the Sangha and charities instead of burning items creates more merits. Actually, this can be done any time, but it is a custom to especially do so on the 15th day of the 7th lunar month in Buddhism - to celebrate Ullambana. Other than benefiting deceased relatives, friends and even past karmic "enemies", we can also have their suffering alleviated. We can also celebrate Ullambana by doing good to honour our present parents who are still alive. 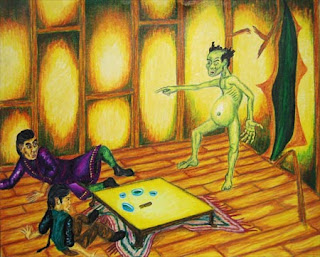 Myth 6: Why is there more supernatural phenomena during the 7th month? What if I have dreams of a relative asking for paper items?
TRUTH: There might be more supernatural activity when we create elaborate and rowdy celebrations to gather and honour unseen beings, especially while we also become tense and expect supernatural incidents to occur. Humans disturb unseen beings accidentally, more so than them disturbing us intentionally. In this way, experiencing the supernatural can be a self-fulfilling prophecy. 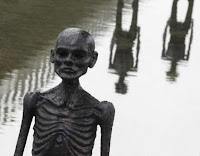 Some of the deceased are attached to the idea that they need paper items burnt for them, which is why they might appear in dreams asking for them. Likewise, surviving relatives might be attached to the same idea, which is why they dream similarly. Explanation to the deceased might be good, to let him or her realise that burning is not needed. If this does not work, it is perhaps better to burn some items - to let him or her realise the futility of the practice.

Myth 7: Life in Hell is eternal suffering.
TRUTH: Since there is limited evil that one can do in a lifetime, one will not experience unlimited karmic retribution forever. However, due to great suffering, life in hell is often experienced as a very long duration, many eons.

Myth 8: All unseen beings are either mischievous or evil. We need to appease them and ask for protection. 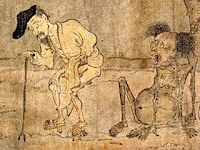 TRUTH: Most hungry ghosts and wandering spirits (both of whom are so due to great attachment) are suffering too much in their own condition to be able to play tricks on or sabotage us humans in any way. Just as most humans do not go all the way out to harm each other, most of them do not harm us. Just as only a minority of humans are downright evil, so are unseen beings. There is no need to appease any unseen being, but we can practise compassion when we encounter them.

Myth 9: It is definitely unfortunate to encounter an unseen being.
TRUTH: Encountering an unseen being is due to your karmic affinity with each other. We should do what we can to ensure there is no enmity, by being sincerely compassionate, by understanding and calmly wishing him or her well. If it is a negative karmic affinity, it should be transformed to one of goodwill by urging him or her to let go of attachment to take a good rebirth. You can do this by having good intentions, and reciting the name of the Lord Buddha, while wishing the being to do the same single-mindedly. The Buddha vowed that any being who is continuously mindful of him will be received by him for birth in His Pureland. 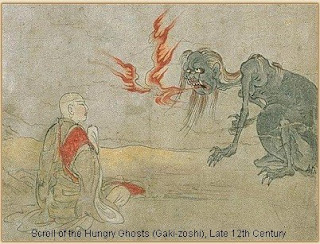 To Buddhists, the 7th lunar month is actually a joyous month, which is also known as the Ullambana Festival. This is because the 15th day of the 7th month is often known as the Buddha's joyful day and the day of rejoice for monks. According to the Ullambana Sutra, the Buddha instructs his disciple Maudgalyāyana on how to obtain liberation for his mother, who had been reborn into a lower realm, by making food offerings to the Sangha on the 15th day of the 7th month. And because of this, the number of monks who attained enlightenment during that period was high, the Buddha was very pleased.

Every year, my parents usually write the names of my paternal grandparents and maternal grandfather at the temple so that the temple can make daily offerings and prayers to liberate the dearly departed into blissful rebirths. It is called a 超度 ceremony. It is an appropriate time to offer prayers and food offerings :
1. For the Buddhas and Bodhisattvas
2. For the hungry ghosts and wandering spirits.
3. For the unfortunate unborn babies.
4. To pacify karmic creditors and vengeful beings. Sometimes we meet obstacles because we have offended beings in our present and past lives, hence they are creating problems for us now.

There are 6 realms in which we can take rebirth; Deva (gods), Asura (demi gods), Human, Animal, Hungry Ghost, or being in Hell. One's previous actions and thoughts determine which of the 6 realms one is reborn into. 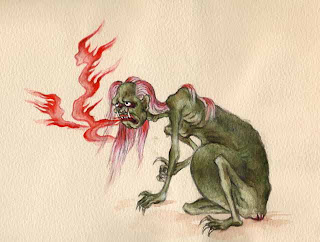 This is a photo of a Hungry Ghost (preta). They are beings with huge, empty stomachs, but they have pinhole mouths, and their necks are so thin they cannot swallow. They experience continuous frustration and unsatisfied hunger. They can never get enough satisfaction. They can never fill their bellies. They're always hungry, always empty, always seeking it from the outside. They seem to be attached to their worldly material possessions they once had, including their homes and other places, and when they pass away their suffering continues and no matter how much they have or they eat they are never satisfied.

Pretas are believed to have been jealous or greedy people in a previous life. As a result of their karma, they are afflicted with an insatiable hunger for a particular substance or object. Traditionally, this is something repugnant or humiliating, such as human corpses or faeces, though in more recent stories, it can be anything, however bizarre.

We can control our actions, to do good or bad deeds are entirely within our control, which will affect our karma, and in turn directs where we take rebirth in. We should have compassion towards those reborn in the lower realms of animals, hungry ghosts and hell, by performing good deeds and dedicating the merits to them. Merits are the only things we can bring with us in death, not our house, not money or loved ones. Hence, accumulating merits is crucial for the sake of ourselves as well as for other beings.
yours truly, STUMPBO @ 2:23 pm

Email ThisBlogThis!Share to TwitterShare to FacebookShare to Pinterest
Categories Buddhism, My Thoughts