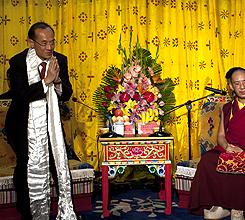 I read with astonishment a Straits Times report that our Foreign Minister George Yeo had requested to meet and has met up with Tibet's so-called Panchen Lama on 13 Sept 2010. I am even more appalled to learn that Mr Yeo has extended an invitation to the Chinese-appointed Panchen Lama to visit Singapore. Note the comments at the bottom of that article.  Below is my two-cents worth:
1. Before acting without consulting the relevant parties, the Singapore government and authorities should get their facts and history of the Panchen Lama straight.  If they are not aware, the Panchen Lama Mr Yeo met is not the authentic Panchen Lama, and in terms of  pure lineage and incarnation, he is not recognised by His Holiness the Dalai Lama. The real Panchen Lama has been captured and possibly harmed by the Chinese government.

3. Why is the Singapore Government mixing religion with politics?  Whatever happened to promoting religious harmony, and the Government's objective to keep itself secular and democratic in regards to religion? Mr Yeo should have been more sensitive to Singapore's Tibetan Buddhist community, especially more so when he himself is a Catholic.

4. Singapore always strives to be the Number One in everything. But why does Mr George Yeo wants to be "the FIRST foreign leader known to meet the (fake) Panchen Lama"?

5. The unbroken lineages of the Dalai Lamas and Panchen Lamas, as well as the lineages of the Karmapas and other great Tibetan masters and their traditions are passed down since the Buddha's time. It is very sacred. It is not just like the General Elections in Singapore, whereby you can vote/elect who you like. The Panchen Lama, and possibly the future Dalai Lamas CANNOT "just be elected or appointed" by the China government as and when they dictate due to political reasons. It just does not work that way. 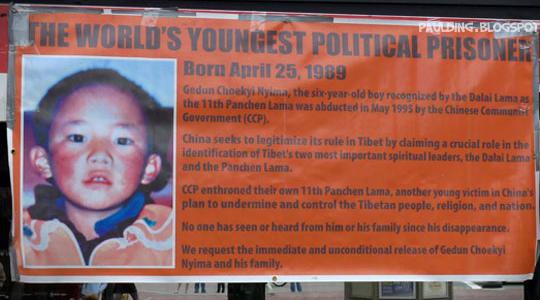 Below is a letter from Tara Melwani, who wrote to SBF and whom I feel aptly represented the views on behalf of the Tibetan Buddhists here in Singapore.

To the President and Executive Committee of the Singapore Buddhist Federation:


I am writing in response to the recent media reports on Foreign Minister George Yeo’s meeting with the Chinese-appointed Panchen Lama in Beijing on 14 September 2010. It was reported that SBF members who were present at that meeting had extended an invitation to this Panchen Lama to visit Singapore and meet members of the Singapore Buddhist community. The news report indicates that this invitation came on behalf of all members of the Singapore Buddhist community. This gives the impression that all Buddhists in Singapore welcome this move.
This is the contrary to the view point of Mahayana Tibetan Buddhists following the lineage of His Holiness the Dalai Lama. It is customary in the 500-year old lineage in Tibetan Buddhism for the Panchen Lamas to be chosen and recognised by the Dalai Lamas. It is an important factor to myself and other dharma brothers and sisters that we maintain the purity of our Guru-disciple relationship. You may be unaware that His Holiness the Dalai Lama did not recognise this Chinese-appointed Panchen Lama that you have invited. As a result, we do not encourage this visit and making this karmic connection. We are dismayed that this fundamental view point was not taken into account when you invited the Chinese appointed Panchen Lama to Singapore.

The Declaration of Religious Harmony of Singapore states the importance of and the commitment of Singaporeans towards religious harmony. Since religious harmony is a prominent pillar of our Singapore society and furthermore, is mentioned as one of the main objectives of the SBF, I am curious to know how you have considered this aspect when you proferred this invitation on behalf of the Buddhist community in Singapore.

Please note that I have written this letter in my personal capacity as a practicing Mahayana Tibetan Buddhist and a student of His Holiness the Dalai Lama. It is my greatest wish that the views of all Buddhist traditions in Singapore can be shared and better understood amongst Buddhists and Singaporeans for our mutual benefit and harmony.

With my deepest respect,
Tara Melwani\

As a Tibetan Buddhist, I DO NOT ENDORSE any visit by the Chinese-appointed Panchen Lama and do not wish to be karmically linked to an unauthentic guru, who is merely chosen by the Chinese government.  We have to be very mindful that by creating the affinity with an unauthentic lama, we directly affect our own karma as well as that of the people in Singapore. I hope the government take into consideration this issue gravely and provide an explanation the soonest possible to the Tibetan Buddhists in Singapore.
yours truly, STUMPBO @ 9:58 am