Giving the benefit of the doubt

Just a couple of days ago, I was at the MRT station. I was using the ATM when a local, very tanned Chinese man probably in his early 50s waved at me from a couple of metres away. He was at the ticketing machine. I thought he needed help in dispensing the EZlink card. When I reached the machine, he showed me 80 cents on his palm, and he said he was short of $2.10. Shocked, I said "huh?" and knew what he wanted. He said he had no money to take transport but he needed to go Jurong for a job interview as he was jobless. 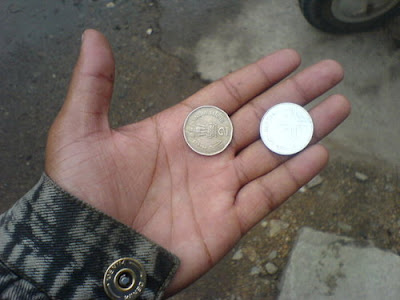 Even though I did not exactly believe him 100%, I took out my coin purse and digged out exactly $2.10 in coins and put them in his palm. Although I did not questioned him, I did not give that friendly an expression either. I think I looked grim or stony.  I walked back to the ATM. From the corner of my eye, I was watching him as he put in the money to buy the card. After like 2 minutes later, he got his card. Before he walked off, he turned and looked at me with a little hesitant look, and said "thank you" in Mandarin. I was a little relieved his purpose was indeed to buy a single-trip ticket. I had earlier on half-expected him to run off with the money without buying any ticket.
In my mind, I was thinking, if I had ignored his plea (begging) earlier because I was suspicious, I would be feeling a little guilty now for not helping him. At least he was not like one guy previously who begged me for $5, saying he was starving, yet he was puffing and holding a cigarette at the same time.  At least he was not like yet another guy who begged me for $10 to take a cab! Those 2 times were the only times I ignored the "beggars".

In similar situations to this incident, I would always choose to give the person the benefit of the doubt, and just treat it as an act of a little charity. Just as I have received a lot of kindness from others, I should also do the same for others. I choose to believe that maybe he was sent by the Divine Beings to test me.  In this way, I feel better. May the man get a job soon.
"When you give,
you show your appreciation
to the source of all things."
- Deepak Chopra
yours truly, STUMPBO @ 9:11 am