Are you a fan of Mee Sua, a cousin of the Bee Hoon? 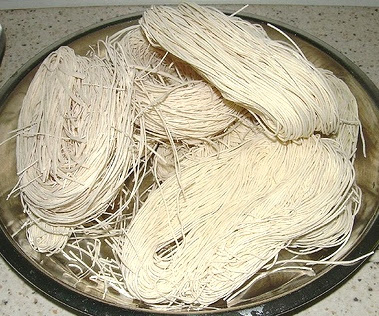 According to Wikipedia, Mee Sua "is a very thin variety of salted Chinese noodles made from wheat flour. It is originated from Fujian, China. They differ from mifen (rice vermicelli) and cellophane noodles in that the latter two are made from rice and mung beans, respectively, and typically a lot thinner than those two varieties."  The Mee Sua is one of the many types of noodles that Asians have adapted into their daily diet of eating noodles. I love my Mee Sua. 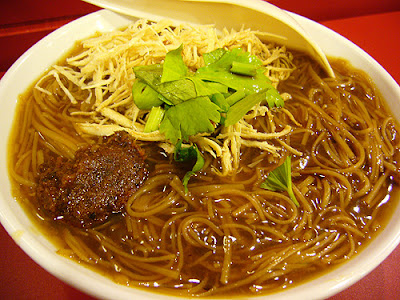 When people mention Mee Sua, we often think of the famous Taiwan Oyster Mee Sua. The Taiwanese called it as O-Ah-Mi-Sua. O-Ah-Mi-Sua is the salted wheat flour vermicelli covered in a layer of thick starchy broth, giving it a smooth slippery texture, with oysters, shredded chicken meat, topped with vinegar, chili oil, garlic and parsley leaves to give it an exotic flavor. It is to be eaten piping hot with a spoon only. 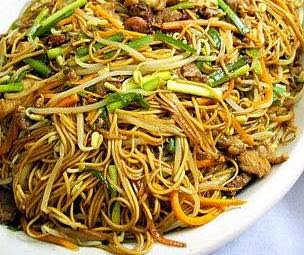 On the other hand, closer to home, Singaporeans are more familiar with the Stir Fry Mee Sua which is the Tze Char style. It is frying the vermicelli in a wok in high heat and the result is a flavourful dish of brown mee sua, the dry version, which looks very similar  to Char Bee Hoon. 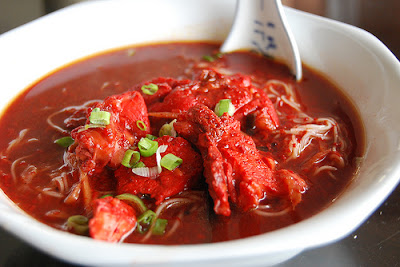 Another Mee Sua dish is the Red Wine Vermicelli (Ang Chiew Mee Suah). This dish has its origins from Foochow, China. The combination of red rice wine and ginger gives a strong, fiery taste to this dish, which is sometimes apt for women who have just given birth as it strengthens their weakened constitution. I like the wholesome taste of the reddish coloured soup maybe because of the wine, that I can just eat the mee sua and drink the soup even without the chicken. 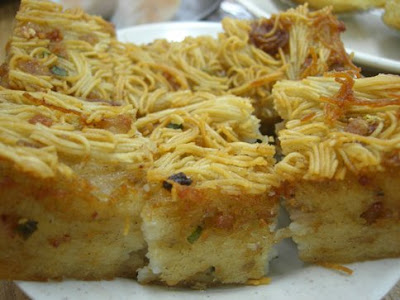 Some people like to their mee sua in the form of a chinese savoury cake, Mee Sua Kueh. They made the kueh with mee suah, pumpkin, shitake mushrooms, chinese sausages, dried shrimps, shallots, garlic, minced pork, and spring onions. Everything is then mixed in a big pan and steamed. 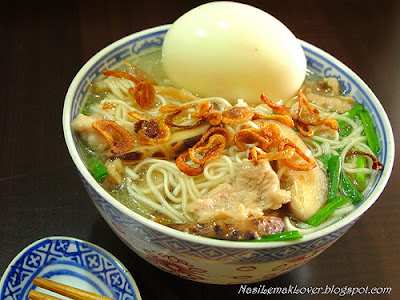 Do you know that mee sua are usually cooked during important festivities, and eaten in  most Chinese communities, like China, Taiwan, Malaysia, Indonesia, Singapore, Vietnam, Brunei, Thailand, and the Philippines?  Mee Sua signifies long life in Chinese culture, and as such is a traditional birthday food. It is usually served topped with ingredients such as hard boiled eggs, oysters, pork, shiitake mushroom, shallots, or scallions, and roasted nuts. 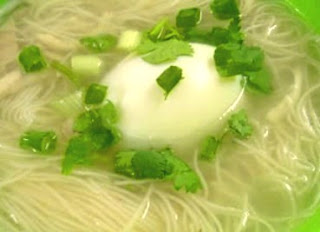 Perhaps the only Mee Sua which I remember fondly of, is a bowl of  mee sua which my late paternal Grandma used to cook for me on my birthdays when I was young. The soup was sweet, not savoury, and the bowl of mee sua was topped with just a hard boiled egg and nothing else. It is this sweet version that I have a craving for now. Maybe I will try to  revive this bowl of sweet mee sua soup one of these days. 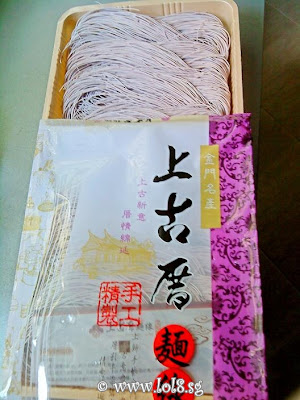 A while back when my parents visited Kin Men, Taiwan, they brought back many packets of Mee Sua. One of the packets was an unusual flavour of Taro Mee Sua which I thought was quite unique. 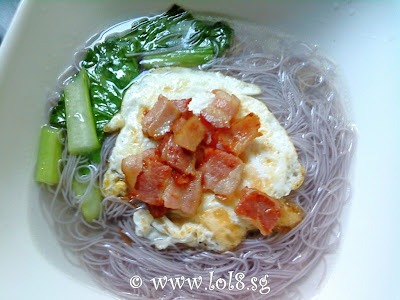 I cooked the mee sua in chicken soup stock, topped with small pieces of slightly crisp bacon, a fried egg and some chye sim veggies. Notice the violet hue of the Taro mee sua. It was so scrumptious and the mee sua did not become disintegrated and soggy easily. What a beautiful simple looking bowl of mee sua.