The man who wears the yellow-dyed robe.... 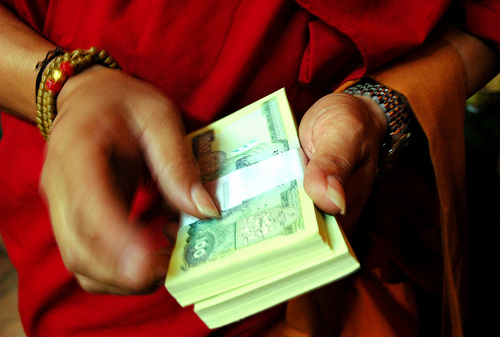 A friend from the West told me from her observation, generally the Buddhists in Asia are more respectful towards the Sangha, compared to her counterparts in the West. According to her, there are plenty of politics among the disciples and sometimes even towards the teachers.

Recently online in the United States, I learnt of a certain tulku (reincarnated lama) who  is embroiled in a controversy with her critics. It got so serious that she had threatened to sue a certain publication for reportedly framing her. Both parties, between the said tulku and her followers and their detractors, are currently in a mudslinging exchange. I do not know the whole story, and do not choose to find out more, truth or untruth.

Closer to home in Singapore, the Buddhist community is abuzz with questions surrounding Venerable Ming Yi's status as a monk. Many Buddhists has voiced their unhappiness about a dinner held in a 5-star hotel, organised by his monastery which reportedly cost $200,000, to celebrate the Venerable's return to the temple, after serving a 5-month jail term. Venerable Ming Yi, former founder of Ren Ci Hospital was convicted of fraud, falsifying documents, misappropriating funds and giving false information to the Commissioner of Charities last October. From this latest dinner incident, it seemed that the Venerable is still unrepentant of his actions. It is sad that although this is a minority of such cases, it has nevertheless cast an unfavourable light on the entire Buddhist community and Buddhists.

I quote my guru, Lama Zopa Rinpoche, "The presence of Sangha preserves the lineage of the Buddha's teaching and establishes the cause for others to have a precious human rebirth in the future. This is a great responsibility for the Sangha. By living in the vow you not only take responsibility for your ultimate happiness, liberation, enlightenment. By living in the vow you also gain so much day-to-day happiness and inner peace of mind. The foundation of our practice is not to harm others or ourselves and to help benefit others as much as we can."


Again I cannot emphasize more than anything else, the importance of having authentic teachers and the learned masters to guide and to give us the teachings of the unbroken lineage of Buddha Shakyamuni. How does one choose a teacher or know a teacher to be reliable?" His Holiness the Dalai Lama said,  "You must investigate before accepting a lama or teacher to see whether that person is really qualified or not. It is said in a scripture that just as fish that are hidden under the water can be seen through the movement of the ripples from above, so also a teacher's inner qualities can, over time, be seen a little through that person's behavior. We need to look into the person's scholarship -- the ability to explain topics -- and whether the person implements those teachings in his or her conduct and experience."

Observe and check your teachers again and again if the guru-teacher is an authentic master, whose own practice serves as a reminder to us to practice and to gain liberation, and not to dwell in worldly pursuits.

The Buddha says, "The man who wears the yellow-dyed robe but is not free from stains himself, without self-restraint and integrity, is unworthy of the robe." 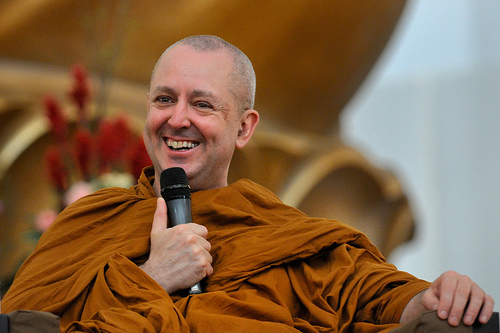 I leave you with a story by Ajahn Brahm, adapted from his book "Who Ordered This Truckload of Dung? : Inspiring Stories for Welcoming Life's Difficulties"...

"I had helped a Thai man with a personal problem. Out of gratitude, he said to me: "Sir, I would like to give you something for your personal use. What can I get you for the amount of 500 baht?" It was usual to quote the amount when making such an offering, to avoid any misunderstanding. Since I wouldn't think what I wanted straight away and he was in a hurry, we agreed that I could tell him the next day when he returned.

Before this occurred, I was a happy little monk. Now I started to contemplate what I wanted. I made a list. The list grew. Soon, 500  baht wasn't enough. But it was so difficult to take anything off the list. Wants had appeared out of nowhere and solidified into absolute necessities. And the list kept growing. Now, 5000 baht wasn't sufficient!

Seeing what was happening, I threw my wish list away. The next day, I told my benefactor to give 500 baht to the monastery building fund or to some other good cause. I didn't want it. What I wanted most of all was to regain the rare contentment I had had the day before. When I had no money, nor the means to get anything, that was the time when all my wishes were fulfilled. Wanting has no end to it. Even one billion baht isn't enough, nor a billion dollars. But freedom from wanting has an end. It is when you want nothing. Contentment is the only time you have enough."