Dreams on her birthdays 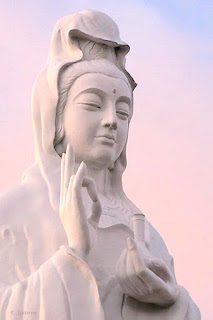 Today 3 April (Saturday), is Guan Yin Bodhisattva's birthday. She is the Chinese Goddess of Mercy, the one with the greatest compassion and mercy.  Guan Yin can transform into many different forms in order to cross over to the beings. Guan Yin is one of the most popular Bodhisattva in China and Asia. It would be good if we can offer lights and flowers to Guan Yin today.

I have an acute affinity with Guan Yin. Throughout many trials, I found she is often by my side, either manifesting in my dreams or in other coincidental incidents.  Last year on the birthday of Guan Yin, I had a rather auspicious dream which you can read it here.

Then in March 2006, on Guan Yin's birthday, I also had a dream of her. I was in a huge scenic green valley surrounded by snow-laden mountains and cool breeze. I saw meandering roads. As I walked along, I discovered a huge tentage with many Tibetan prayer flags hanging gently with the wind blowing. It seemed that an event was going to begin soon or it has just ended, there was no single soul around, but the thangkas and prayer flags were hanging there. As I walked on, I saw many empty chairs neatly arranged in many rows. Then I saw a  big stage in front. On the stage was a huge standing statue of a  resplendent white-robed Guan Yin, the Goddess of Mercy. In the dream I saw myself praying and bowing to her. Then out of nowhere, a very fair lady with long hair appeared. She was wearing white and she was very delicately stunningly beautiful that I was momentarily stunned by her appearance. She called out my name and said in a loud yet firm confident voice "Thank you!". And with that, the lady in white disappeared.

Guan Yin has many emanations. She is also known as Avalokitesvara, the Sanskrit word for the Bodhisattva Who Hears the Sounds of the World. He rescues all beings by hearing their voices of suffering and cries for help. Avalokiteshvara is a Bodhisattva who embodies the Compassion of all Buddhas.

Another time in 2005, I dreamt of the Four-Armed Avalokiteshvara. It was a dream which foretold  something of my new house way before we moved. In the dream we were at an apartment with the unit number on the 6th floor. And the apartment opened to a big green field outside. I saw my Mom praying and bowing some distance away. So I went closer to have a look. At first I saw an empty high throne seat lavishly decorated, which normally the lama or rinpoche sits. Then within seconds, I saw the four-armed Avalokiteshvara floating above the high seat. He was very fair almost translucent white, and looked like a line drawing. His omniscient presence had a very calming effect yet surreal. I saw myself quickly bowing down and prostrating to Avalokiteshvara in the dream. In reality after that, we did ended  up with a 6th floor apartment by sheer coincidence, and not by choice. 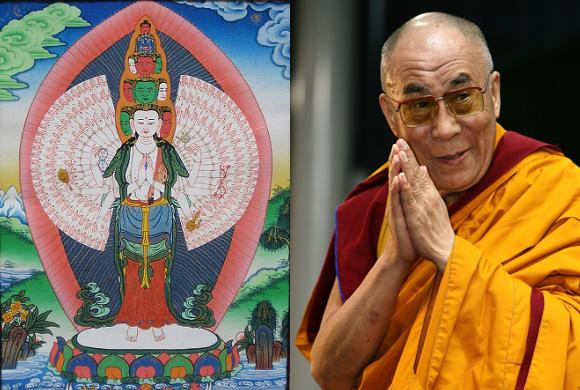 Happy Birthday, Guan Yin! May you continue to guide many sentient beings to Enlightenment with mercy and compassion. I wonder will I dream of her tonight? Om mani padme hum!!!
yours truly, STUMPBO @ 1:06 am