Day 8 of Rinpoche's passing. Below are photos taken during the cremation ceremony of Lati Rinpoche, courtesy and copyright of Gaden Shartse Dro-Phen Ling, Singapore, on 19 April, 2010. 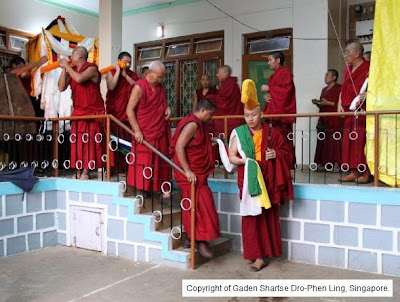 At 6:30am in Lati Ladrang, all the monks and members of Gaden Shartse Dro-Phen Ling paid their final respects before the ceremony, and fire puja was to begin at 7:00am (India time). Photos of our precious Rinpoche's holy body should not be taken before Rinpoche left his room. Above photo was Rinpoche's body being carried out of his room. 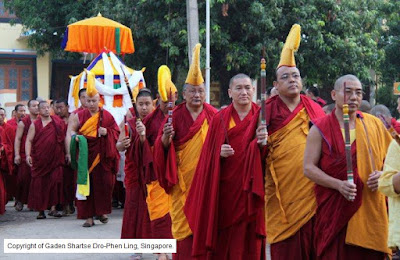 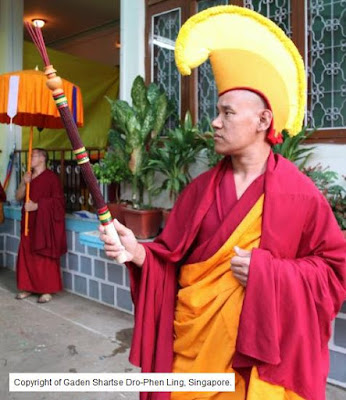 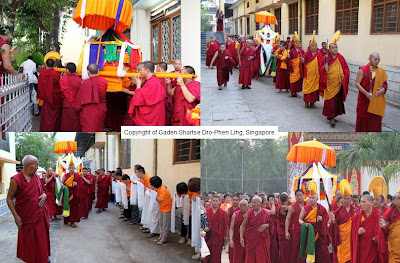 About 10 monks carried Rinpoche's holy body slowly and carefully during the procession. Many monks, students, lay people lined the compounds of the monastery to send Rinpoche in his final journey. As Rinpoche's holy body passed by, everyone bowed respectfully. It was a 15-20 minutes walk to the debate hall where Rinpoche's fire puja was to be held. 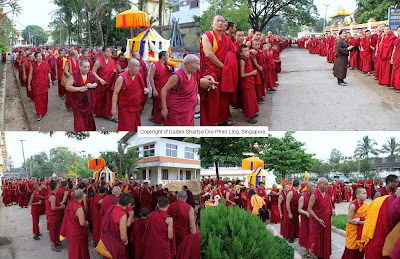 Throughout the procession, thousands of monks were present alongside the entire pathway, all waiting for Rinpoche's holy body to pass. It was very crowded. It was evident that Lati Rinpoche commanded a high respect and devotion from the Sangha, a truly great enlightened lama. 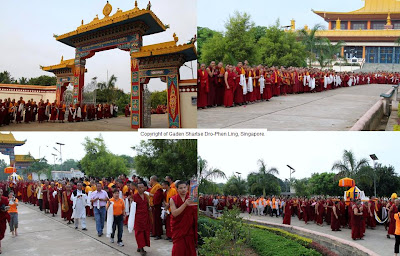 The procession led by HE Zong Rinpoche, as well as the monks and members of Dro-Phen Ling finally arrived at the entrance of Gaden Shartse Monastery's debate hall. Even more thousands of monks awaited. 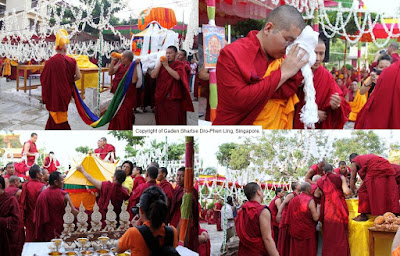 HE Kyabje Zong Rinpoche continued to lead HE Lati Rinpoche's holy body and group to circumambulate around the stupa 3 times.  Another reincarnate of a high lama, HE. Kyabje Ling Rinpoche, made a prayer dedication and offered a karta to the precious holy body of Rinpoche, before it was transferred into the stupa for cremation. 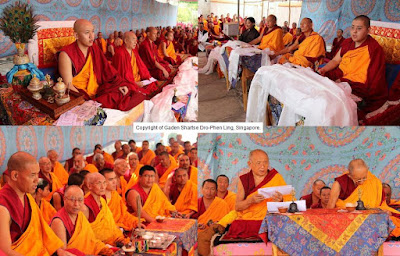 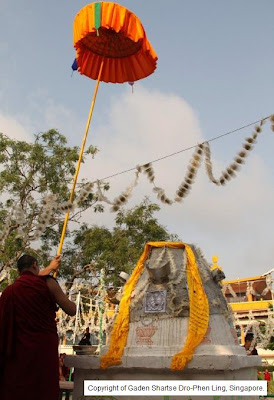 Before the start of the fire puja, the offering of the parasol, was symbolic of protection and royalty. 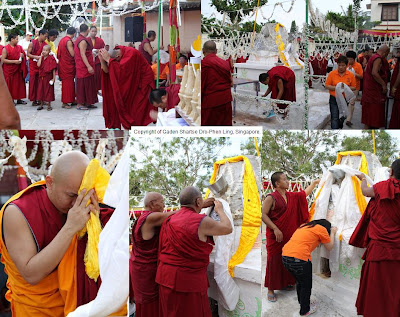 Gyen Sopon-la, personal attendant to Rinpoche for more than 50 years, made 3 prostrations to Rinpoche, and made his prayer requests and offered karta. H.E. Kyabje Song Rinpoche also made his prayers for Rinpoche's swift return. After that, the monks and members of Dro-Phen Ling all took turns to circumambulate the stupa 3 times, before making their prayers and offering of karta.  This was the last chance to pay final respects to Rinpoche before the actual start of the fire puja. 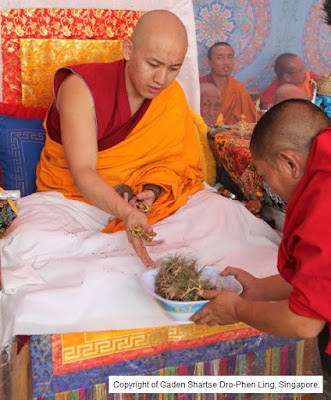 H.E. Kyabje Zong Rinpoche blessed all the substances to be used for the fire puja. 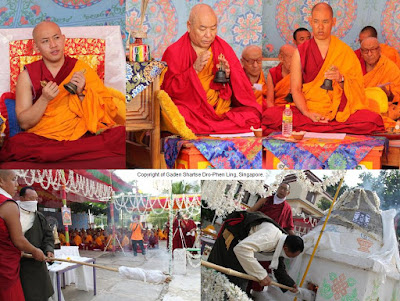 H.E. Kyabje Zong Rinpoche led in conducting the fire puja, together with Abbot Emeritus of Gaden Shartse Monastery, H.E. Kensur Rinpoche Dakpa Tenzin and Khen Rinpoche, as well as all the other Rinpoches and old Geshes.  The fire was lit and was to be inserted into the stupa to begin the cremation.  The fire was inserted starting from the front hole, facing all the Rinpoche's and Geshe-las.. followed by the other 3. The 4 holes represented the 4 directions. 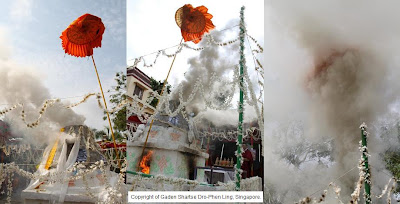 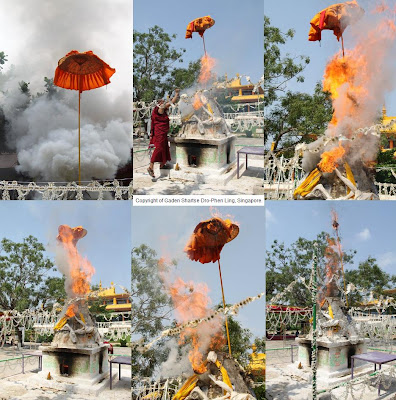 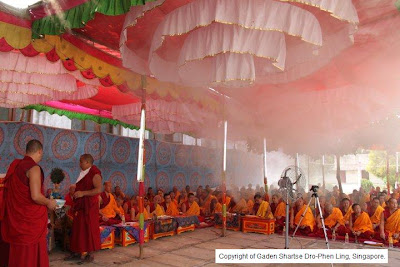 In the meantime, all the monks continued their prayers during the puja, while the cremation was on-going. Smoke engulfed the entire place. 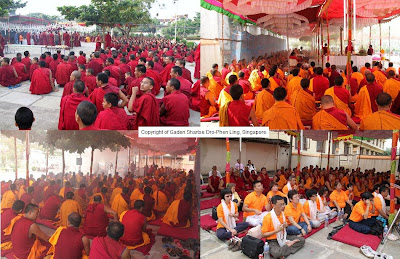 Together with the monks, the group DPL devotees, also focused in prayers for Rinpoche's swift return. 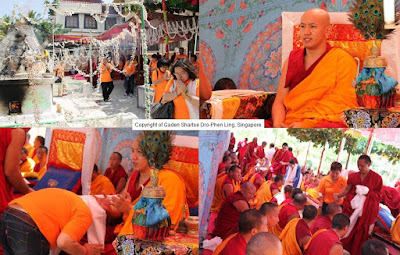 At the end of the grand fire puja, Chairperson of Dro-Phen Ling made offering  on behalf of all members of DPL to  all the monks and received blessing from H.E. Kyabje Zong Rinpoche. Once again, all the Rinpoches, Geshes and monks circumambulated around the stupa 3 times and made prayer dedications the final time. 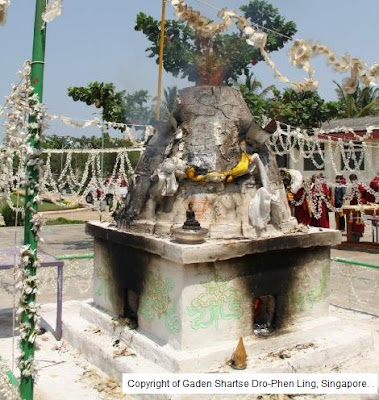 The stupa pyre after the cremation. It will be opened up this Friday 23 April to uncover Rinpoche's relics. 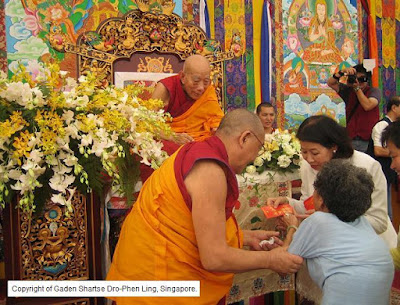 With the completion of the cremation, we came to a close the life of a Great Lama. We will always remember the compassionate and kind Lati Rinpoche, who had given his entire life to the Three Jewels, and a great teacher who came to benefit many sentient beings, with his teachings, initiations and blessings. Above was Rinpoche in Singapore for the  grand public puja, accompanied by his assistant Sopon-la and Mrs Goh Chok Tong. Red packets were given to the old, sick and needy. 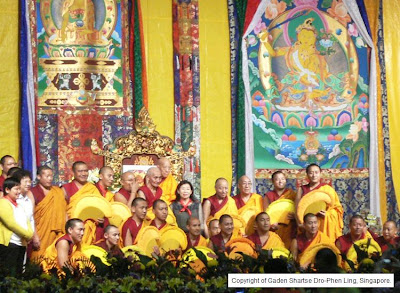 From the bottom of our hearts, we would like to thank Lati Rinpoche, for being a part of and touching our lives dearly, in order to benefit us, not just in this life but for our future lives as well. May all who has met Rinpoche, seen him, talked to him, heard about him, received teachings from him and may all who is reading this be connected to Lati Rinpoche in the future. May all achieve realisations and may they be blessed by the Three Jewels always. 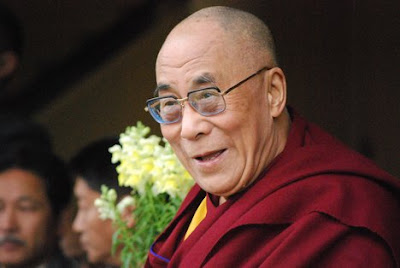 His Holiness The 14th Dalai Lama has specially composed a quick return prayer for the swift return of HE Lati Rinpoche. May the sun of Lati Rinpoché’s reincarnation shine soon and may he be quickly discovered.
Here is a note from His Holiness:

As I have had close association with this authentic spiritual teacher for over fifty years and have enjoyed a bond of pure faith and commitment, I have written this aspiration prayer. May the aims of this aspiration be fulfilled as prayed for.

This was composed by the Buddhist monk, the Dalai Lama, Tenzin Gyatso, on the 5th day of the 3rd month in the seventeenth Rabjung cycle of the Tibetan calendar, namely, on 19, April, 2010." 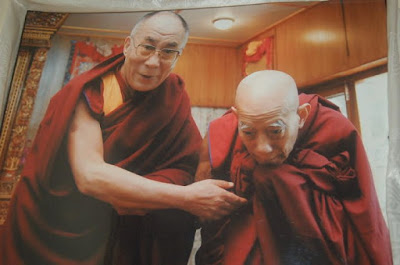 PRAYER FOR THE QUICK RETURN
OF KYABJE LATI RINPOCHE
(Composed by His Holiness Dalai Lama)
O peerless savior and supreme Teacher, Shuddhodhana’s son,
O the seventeen masters and adepts, Nagarjuna and Asanga, and so on,
O Dipamkara as well as sovereign father Tsongkhapa,
Gloriously appear here today to grant auspiciousness.

On the great path leading to the heart of Enlightenment,
You’ve traversed by means of the perfect threefold discipline,
And have enhanced ever higher the realizations of enlightened qualities –
O glorious Guru, we offer our supplications at your feet.

Pray return gloriously to propagate the teaching of Lobsang,
By tying well the sash of monastic disciplinary precepts,
And, generating the altruistic intention to free all beings,
Engage in the tantric yogas of the two stages.

Think of the unbearable pain of the sentient beings
Who’re enveloped in the forces of five degenerations;
And to open wide the lotus grove of the Buddha’s teaching,
May your reincarnation appear soon as a source of merit for us.