Recently, I received a piece of wonderful news of one of my foremost gurus in the early days, whom I have only met once but he left an unforgettable memory. He is Gyudmed Khensur Rinpoche Jetsun Lobsang Delek. 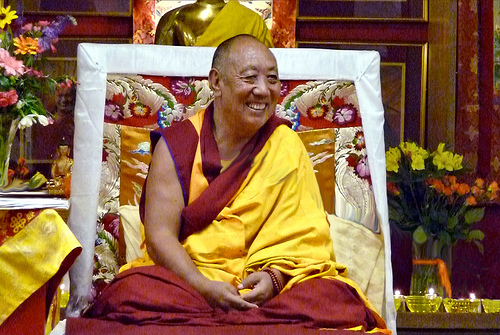 In those days, we only know him as Geshe Lama Gyudmed.  He bestowed me my very first Green Tara initiation when he was here on his maiden trip to Singapore. After that, Geshe Lama Gyudmey went on to become the Abbot of Gyudmed Tantric College, one of the famous monastery also known as the Lower Tantric College of Lhasa in Tibet and also one of the 6 major learning monasteries within the Gelugpa School of Tibetan Buddhism. The other famous monastery of tantric teachings is Gyuto Tantric College. 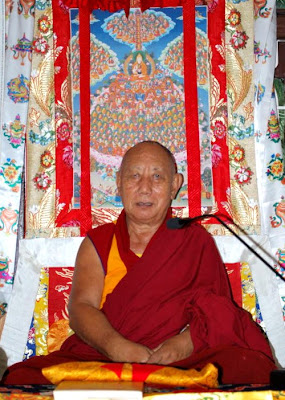 Gyudmed Khensur Lobsang Delek Rinpoche is a renowned Tibetan Buddhist scholar, one of the esteemed teachers in the Gelugpa tradition, being the teacher of thousands of students, including several important reincarnate Masters. He is also one of the foremost teachers of the "Five Major Texts" at Sera Jey Monastic University in southern India, being known as Geshe 'Uma Gyukpa' (foremost scholar of the Middle Way).

The recent good news is that Gyudmey Khensur has been appointed by His Holiness the Dalai Lama to be the 100th Segyu Khen Rinpoche, Abbot of Segyu Monastery.  Only senior, retired abbots of Gyuto and Gyudmed Tantric Monasteries are eligible to be the Abbot of Segyu Monastery in Tibet. In fact, it is the first tantric college of Tibet. After exile, Segyu Monastery has suffered in terms of its practice and precious traditions. So as Abbot, Gyudmed Khensur is called upon and needed to revitalise the monastery. Rejoice!

When he was here with 2 monks on his first trip to Singapore a few years ago, we went on an extensive animal liberation trip.  We took a few bum boats out to the kelong to purchase lots of huge fishes and other sea creatures and to release them.  I was in the same bumboat with Gyudmed Khensur. He was very focused and serious when saying prayers for the fishes, and even after they were released into the waters, he meditated for a long while on his own, gazing at the sea. Afterwards, he broke his serious demeanor, and became his friendly jovial smiley self with a hearty laugh again. Rinpoche is a very very humble monk.

My godbro and I took plenty of photos with Gyudmed Khensur. My godbro has a very special connection with Gyudmed Khensur.  He is very respectful to Rinpoche, and was particularly attentive to Rinpoche, his very first teacher. After that fateful trip, my godbro has gone on to many other animal liberation activities on his own. May my godbro continue his virtuous activities and may he succeed in his Dharma practice.

I have only met Gyudmed Khensur once since his first visit. As he is now very busy as Abbot of Segyu Monastery at least for the next 3 years, may I be able to meet him again some day.  May he stay healthy always!
yours truly, STUMPBO @ 12:00 pm