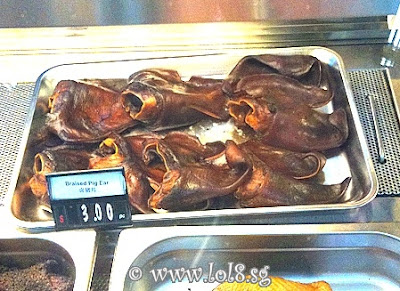 Saw these in a supermarket the other day, and it kind of grossed me out a little. These are braised pig ears. I do not see these often nowadays but I am sure many restaurants sell them.

Pig's ears are usually boiled or stewed, and then sliced thin, served with or spiced with chili paste. Pig ears are usually stewed in a classic Chinese red braise of soy sauce, sugar, star anise, and cinnamon, the savory-sweet ear is served chilled and sliced into long slivers. The ears are then cut across in width, each sliver is a cross section of all three elements in the organ. The Cantonese, in particular, like a platter of sliced pig's ear as a cold dish, an essential part of their Chinese dining experience.

When cooked, the outer texture is gelatinous, akin tofu is crunchy. Like tofu, the cartilage may be mild in taste. I was wondering, since it is almost tasteless, why eat pig's ears?

I have never tasted pig ears before and I do not intend to try. This is because, when I sight the ears, I would think of how those ears were sliced off the pigs' heads, just as how fins were being sliced off from the sharks.

In other news, it is great to hear that Asia's oldest hotel chain, the Peninsula Hotels group, is taking sharksfin the Chinese delicacy off its menus. From January, diners won't be offered shark's fin products at the luxury Peninsula Hotels chain, due to a decision by its owners, the Hongkong and Shanghai Hotels group.

"By removing shark fin from our menus, we hope that our decision can contribute to preserving the marine ecosystem for the world's future generations," the group's chief executive officer Clement Kwok announced in a brief press statement.

Around 73 million sharks are estimated to be killed each year, taking one in three shark species to the brink of extinction. Their fins are hacked off at sea and the carcass discarded in the water in a practice referred to as "finning."