Tomorrow is Vesak, and I am so happy to have a great master visiting us during this period to celebrate Vesak / Saka Dawa as well as to bestow teachings for one whole month. He is Tokden Rinpoche from Dagyab.


During the old days in Tibet, Tokden Rinpoche had received many teachings and empowerments from H.H. Kyabje Trijiang Dorje Chang and the H.H. Kyabje Yongzin Ling Dorje Chang, both the tutors of His Holiness 14th Dalai Lama.

H.E. Tokden Rinpoche used to live and give teachings in Manjushri Center (FPMT) in London, as well as Georgia USA for a few years. Rinpoche is a very skilful teacher and gives regular teachings in the Himalayan regions, Thailand, Taiwan and other western parts of the world. Rinpoche is highly-respected not only within the three great Monasteries of Drepung, Sera and Gaden - but also deeply revered amongst the community of Rato & Tashi Lhunpo monasteries and nunneries. Today, Tokden Rinpoche belongs to one of the most capable teachers who has the major transmissions of the lineage, and is known for his pure accomplished practice.

My teacher, Dagyab Rinpoche, had talked about this issue in 2014 dispelling rumors regarding Shugden(you can read it here). I feel that it was a very significant statement, and necessary in order to stop the unhealthy and misleading information which has been circulating by people both online and within the Tibetan Buddhist community in Singapore. It is an important message to all Dharma practitioners, to be mindful of their speech and conduct, to maintain religious harmony between Buddhist centres, as well as to preserve the pure teachings of the Buddha Dharma.

Recently, again there was a reader asking if Tokden Rinpoche is practising Shugden.  I replied him that in the old days many of the old  monks/masters did but they stopped after His Holiness the Dalai Lama's advice. However the said website still made use of the names of those masters to promote Shugden. So it misleads many people online with deception. Imagine the bad karma they are creating for themselves by this action.

As Dagyab Rinpoche said, "As a Buddhist practitioner, one needs to have certain responsibility. I am quite sure those people who are talking about this must have also taken Bodhicitta vows and Tantra vows. They need to think very carefully the result of committing such a downfall and samaya vows. Talking (spreading rumours) in this way, they must have certain intentions. I suspect they just want to separate Dharma brothers and sisters. This is really not nice. This is not the way to behave as Dharma practitioners".

Enjoy the teachings which Tokden Rinpoche is bestowing this one month. Check out his programme organised by Gaden Shartse Dro-Phen Ling. In my next post, I will share my notes transcribed during Tokden Rinpoche's teaching on the "Essence of Dharma" the past weekend.

Happy Vesak to all!  May all be auspicious! 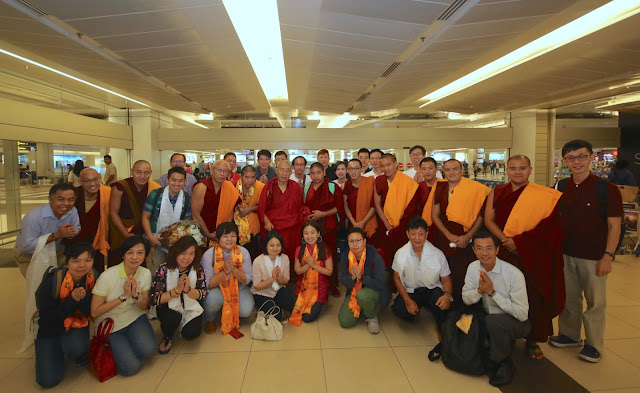