Would you tattoo your girlfriend on your back? 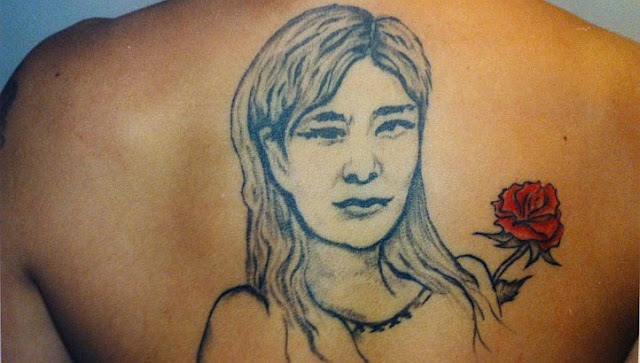 Chinese national, Wang Zhijian, is on trial for allegedly killing his girlfriend Zhang Meng in a frenzied attack in her Yishun flat in Singapore. She was found with 44 knife wounds. He is also accused of killing her teenage daughter and a flatmate too.

The couple apparently fell out over durians. Zhang Meng had wanted money from Wang Zhijian to buy durians. When he refused, she called him a pauper, which enraged him and resulted in this tragedy.

When the couple were on better terms, Wang Zhijian got a picture of his girlfriend Zhang Meng tattooed on his back to prove his love for her, this was revealed in court today.

As a guy, would you tattoo your girlfriend's photo on your body?  Does that make one more faithful? What happens when the relationship turn sour and you have found someone new to love?  Does 'possessing' a part of your girlfriend with you ensure that she will stay with you forever?  Why must one be so attached to a physical aspect of your lover? Isn't that too much attachment?

I just feel it is so foolish for a grown up man to kill 3 precious human lives in a moment of fury, not to mention the punishment he has to suffer now not just in this lifetime, but future lifetimes as well.

And just the other day, it was reported in the news that everyday, four or five people in Singapore attempt suicide, and at least one succeeds. The causes of suicide are often due to failed relationships and huge debts.  And the number of those who committed suicide are getting younger. It is so sad to hear news like this.

It is so unfortunate and such a waste of precious human life. We have already created loads of good karma and incredible merits in order to be born as a human in this lifetime. Why do we have to waste it due to such foolish acts?  If we do not treasure this precious human rebirth well, do you know we may be reborn as an animal, or hungry ghost or hell being in our next life, through the unbelievable atrocious actions we commit everyday in this life?

May the souls of the victims whom Wang Zhijian killed rest in peace and may he have a peace of mind and realise/confess his mistake.  May those who need help be able to receive help, may those who need solace be able to find it.  May all human beings treasure their lives well.

Anyhow, be careful what you tattoo behind your back, guys.
yours truly, STUMPBO @ 5:35 pm