Guru in my dream 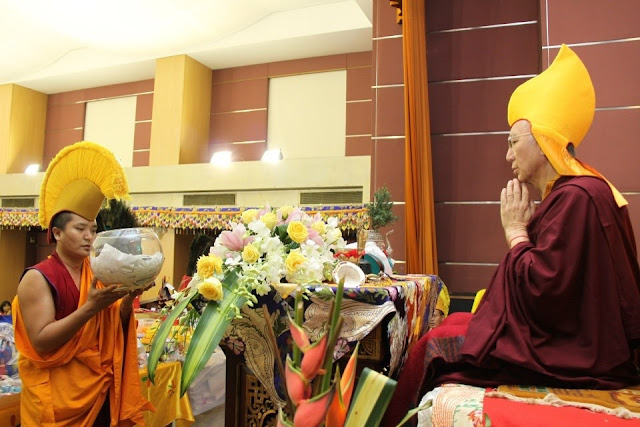 A soothsayer told me before that my life would be very busy and hectic once I reach my present age. It's totally true. I find myself squeezing for time everyday. No longer am I the happy go lucky one who breezes through days of idyllic pace of the past. I am also equally busy at night because normally I have a lot of dreams, mostly nice ones. However I usually cannot recall them when I woke up.


A couple of nights ago I had a dream and this time it was quite clear. I was in a big room, like a small hall which was a gompa. There were a throne seat and a table full of tormas and offerings, although there weren't any thangkas. I saw people streaming into the gompa to take their seats on chairs. The people were unfamiliar to me. I have not met them before. There were a couple of them who were handicapped. There was another who exhibited a little weird behaviour. As I looked around I still could not find any familiar faces.

Just as I was about to sit down, I saw my guru Dagyab Rinpoche appeared at the door. He was wearing his robes. He was alone and came in smiling brightly as usual. He did not ascend his throne seat. Instead he smiled and greeted everyone. He walked towards the audience and to shake their hands as well as blessed those who offered karta to him. He also greeted me and smiled when be saw me. Then he blessed the stuff which was on the table before going up his throne seat. Once sitted, Rinpoche's face became quite serious. He said in a stern voice, "today I am going to give you an initiation."

Abrupt end to the dream. To me this dream was significant in a certain way and a prelude to the present.
yours truly, STUMPBO @ 11:14 am