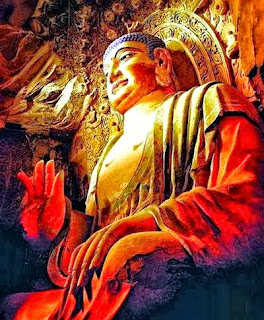 Last night I had a dream. It was raining and I was seeking shelter inside a cave. It was a cave with a very high ceiling. I was walking and walking and exploring the cave.  Then I came to a point where I saw a huge and tall slab of wall in front of me. Somehow without thinking, I just began to climb the wall, very slowly as I was afraid of falling down. It was quite high and steep without much grip.

When I was just about to reach the top, I discovered what was on the other side of the wall. I had to cling onto the wall precariously and strain to see what it was. Before my eyes, was a huge statue of a Buddha, resplendent in the lotus position. And the 'wall' which I was climbing was actually the back of the Buddha statue. Where I was, I was in fact at the head of the Buddha, somewhere near his left ear. I was quite stunned at the discovery that I forgot the fear of falling at that very moment.
yours truly, STUMPBO @ 11:43 am