A facade of memories 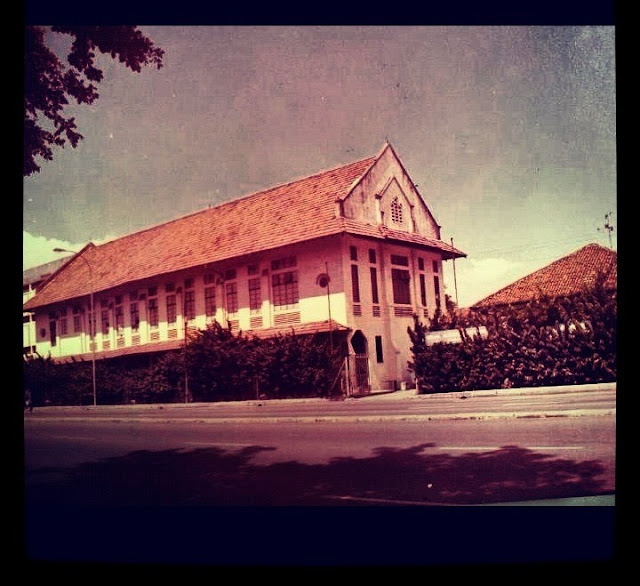 This was my primary school which had already been demolished many years ago, to make way for a new school building and a MRT station.  Somehow this building will remain etched in my mind forever as it brings back so much memories of my childhood.

Coming from one of the Methodist schools, I used to study in a Christian environment.  This main building had a row of classrooms on the ground floor and a hall on the second floor.  From primary through to secondary school, this hall brought so much memories of my school life.

I had my first performance in primary one on stage in the hall during Christmas, playing one of the Three Kings (or Three Wise Men) who visited Jesus Christ after his birth and brought gifts of gold, frankincense and myrrh. We also had our weekly chapels in the hall. It was compulsory to attend chapel unless you are a Muslim. We had our school camp during secondary school and slept in this hall too (I remembered the group of us slept on floor of the stage and pretended to sleep when our teacher was still awake), and we had camp fires downstairs.  It was quite eerie sharing ghost stories in the night in such an old rundown building. I attended many prefect induction ceremonies over the years but I guess the most memorable one would be when I became the head prefect in Sec 4.  I remember going on my rounds around the school compound every morning and especially at the gate to make sure my prefects are catching late comers. Hehehe....

The little small building next to this old building had only 2 classrooms, and it was next to a church. Then we had a very old and small canteen (we called it "the tuckshop" in those days) with only 4 small stalls (but very delicious food). In those days, we indulged in colourful syrup drinks and snacks. We played "zero point" in the tiny basketball court, and joined the mosquitoes at the monkey climb ( I hated it) on the grass patch behind the tiny garden. Then once a week, we took a stroll to the nearby public swimming pool for our swimming lessons in the afternoon, and feasted on ice cream and snacks from the mama shop (provision shop run by Indians). We had so much fun.

I remember quite a few teachers fondly from primary and secondary schools. I think they had influenced me positively in many ways, far more than the teachers and lecturers from JC and Uni.  They are Mrs Elsie Quahe, Mrs Diana Ng, Mrs Jane Ng, Miss Shirley Nair, Mrs Angeline Khoo, and 林老师. I will probably write about them another time - they made up my precious innocent childhood memories.