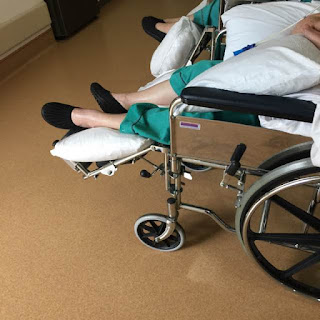 Over the weekend, I spent a meaningful morning visiting the residents of a community hospital with a group of volunteers and choir Mudita from Amitabha Buddhist Centre. The purpose was to celebrate and spread some Mid-Autumn Festival cheer to them. We chit chatted with the residents while the singers went around every section of each ward singing songs and mantras continuously to the residents for 3 hours.

When I passed by one of the isolation rooms, I recognised a man inside. Two years ago, my father had a fall and was admitted to this community hospital and he stayed 2-3 weeks for rehabilitation and physiotherapy. During that time, this man who is a long term resident staying in the isolation room was still mobile. Whenever I visited my father, I remember the man was walking around the ward making a fuss here and there. Today he could not move anymore. He was just lying there with tubes connected to him.

At the chronic unit ward, I was trying to talk to an old lady whom the nurse called Mama Bear. She could not move and her hands are twisted. They told us as most of the patients in this ward are not able to move and some could not see, so they are unable to respond or interact with us. However they can still hear us. So it is good to try to talk to them. I saw her chart and realised she is a Hokkien, so I spoke to her in Hokkien. Her eyes were closed but tears were flowing down. I did not know what else to say except to let her listen to music and mantras playing from my mobile phone.

May all who are suffering physically and mentally be at peace, no matter what circumstances they face. My deepest respect and appreciation to all the admirable health care professionals and care providers.

It was a wonderful, thought-provoking and humbling experience for me. I recorded videos of the songs which the singers sang to the residents (so that I could replay the songs to whoever needs it in future). Whenever I replay the songs now or see the photos we took, I cannot help but to control my tears. I seriously believe that music can sooth and comfort one's soul/heart.  How wonderful it would be that during one's weakest moments, to have someone to comfort them, to stand up for them, or even just having someone's presence, is enough.

Here is one song 让爱传出去 which I recorded. Love the meaningful lyrics.