Was at the Parkview Square building last week to settle a couple of things in one of the offices. Have been to this building numerous times because of work related stuff for the past few years.

It is such a grand gothic building that I would like to showcase it here, with info taken from Wikipedia. Parkview Square is an office building in the Bugis area and it is one of the most expensive buildings in Singapore. Besides commercial office space rented to some elite companies, it also houses embassies of Austria, Mongolia, and UAE.

Parkview Square was built at a cost of S$ 87.93 million and completed in 2002. One of the unique feature of this building is it is designed in classic Art Deco style, with inspiration from New York City's 1929 Chanin Building. 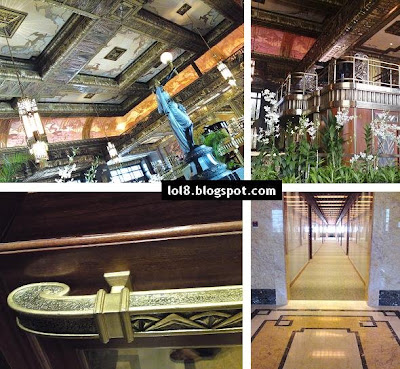 The lobby is also designed mainly in the Art Deco style and features a 15m-high ceiling with handcrafted details. The bar in the lobby of the building has a unique 3-storey high wine chiller. The office space on each floor is columnless. Even the lifts have golden brass handles and ceilings and marble flooring befitting the granduer of the building. 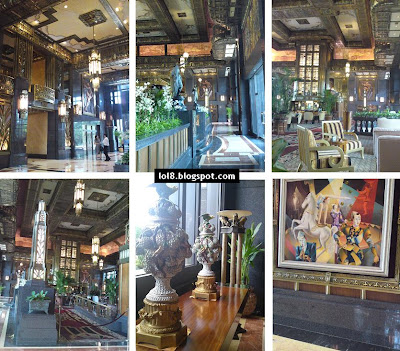 Built by Taiwanese tycoon chairman of Chyau Fwu Group, Mr CS Hwang, he wanted Parkview Square to be "imposing and monumental, yet stylish and elegant". It was so posh and over-the-top that I thought it was a pity it is not a hotel. 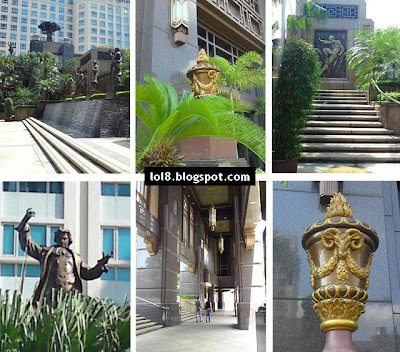 The exterior surface of the building is clad in brown granite, bronze, lacquer and glass. The open plaza of Parkview Square is reminiscent of Piazza San Marco in Venice, with sculptures and statues surrounding the open plaza. There are many bronze effigies of some of the most famous figures in world history, including Sun Yat-sen, Abraham Lincoln, Salvador Dalí, Mozart, Chopin, Isaac Newton, Pablo Picasso, Rembrandt, Shakespeare, Plato, Dante, Winston Churchill and Albert Einstein. 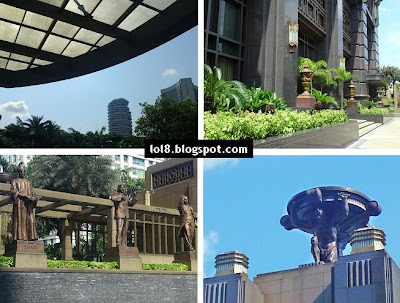 The building also has widespread use of motifs, sculptures, and ornamentation. The building is "guarded" by eight gigantic fiberglass statues of men holding a light ball in their hands, four of them standing on each broad side of the building's crown. Another example is the gargoyles decorating the building’s exterior, which are said to be hand-crafted. 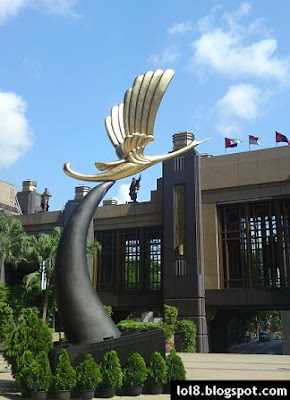 In the center of the plaza is a statue of a golden bird. On the pedestal is written a Chinese poem:

The poem refers to a mythical bird returning to its temple (a place of worship in Hubei, China). It is supposed to bring wealth to the building.
yours truly, STUMPBO @ 1:32 am