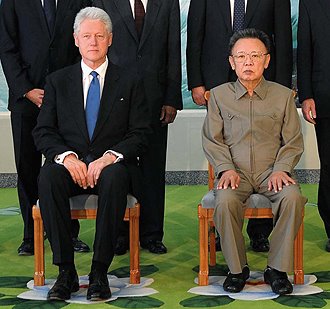 I don't know about you, but I feel ex-President Clinton's visit to Pyongyang was kinda  ... chivalrous? The knight saving the 2 damsels in (otherwise 12 years of) distress?  North Korea's Kim Jong Il finally decided to pardon the two American journalists, Laura Ling and Euna Lee, after Mr Clinton's special visit. The prisoners are now on the plane back home.

Clinton is relatively well-regarded in North Korea, mostly for his less-bellicose attitude toward the country during his administration. So he was definitely a choice envoy for this mission, eventhough just last month, North Korea's Foreign Ministry had only harsh words for his wife Hillary Clinton, describing her as "a funny lady" who sometimes "looks like a primary schoolgirl and sometimes a pensioner going shopping."

Anyway, it just goes to show, the soft approach always works in the midst of tensions. So bravo, Mr Clinton!
yours truly, STUMPBO @ 11:52 am