Day 5 of Rinpoche's passing. Yesterday 15 April, Lati Rinpoche's body has been brought back to Lati Ladrang in Gaden Shartse Monastery. Upon his arrival, pujas were conducted immediately and just completed this morning at 1am Singapore time. In the meantime, guru puja and tsog offering will be conducted everyday. The second group of DPL members have also arrived safely in the Monastery. We await news of the confirmed date of Rinpoche's final rites and fire puja as Rinpoche's personal assistant, Sopon-la, is arranging for several checks and advice from the elders before deciding on the most auspicious date.
Below is the obituary (English and Mandarin versions) published yesterday and today in both newspapers Straits Times and Zaobao. Many devotees and students who were still not aware about Rinpoche's passing into Nirvana, were saddened and distraught upon learning the news. 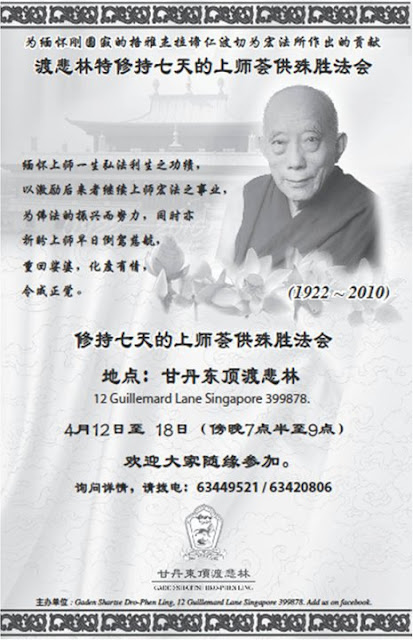 Gaden Shartse Monastery in India will conduct daily prayers for Rinpoche's quick rebirth. Likewise DPL in Singapore will continue the Guru Puja & Tsog Offerings every evening from 12 April to 18 April at 7.30pm. If you would like to plant the seed of affinity with Lati Rinpoche and would like to pay your last respect to him, please join in the prayers. Please continue to pray for Rinpoche's swift return. 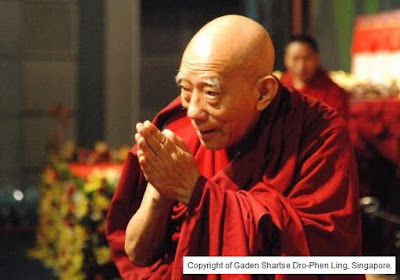 Lati Rinpoche in Suntec City, Singapore, after the Grand Puja.


To the uninitiated or those who are not familiar to Buddhism, they asked what do we mean when we said that Lati Rinpoche was in "clear light meditation" even though he has physically passed away on Monday 12 April 2010. Rinpoche’s body has retained its heat when he was in a meditative state, which in Tibetan is known as "thugdham". He was only out of thugdham on Wednesday 14 April, after about 56 hours.
In the Buddhist tradition, a lama (monk) may choose to die in a certain posture. The position of the body at death is believed to be very important as it affects the transfer of prana or life-force (consciousness) from the body. The posture plays a part in which chakra the prana will exit the body, and thereby, the six realms of rebirth will occur. Masters prefer to die in the lotus posture because this will aid them in transferring their prana through the crown chakra helping them to be reborn in the higher realms. 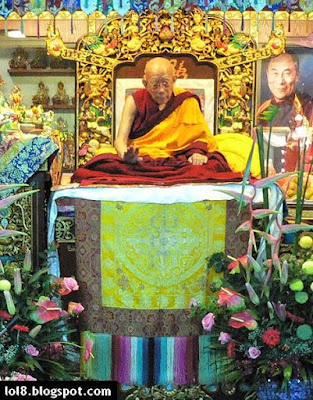 
Lati Rinpoche, like many great enlightened masters, passed away sitting in the lotus posture. Thugdham is a stage in which a highly learned lama or practitioner is able to meditate on the ‘Clear Light Stage’, an ultimate process of transferring his consciousness / enlightened intention to another realm. Lati Rinpoche, a high practitioner, while in thugdham, was able to control his body from decomposition and to maintain the internal body heat. For a Realized master, this is the time of Nirvana: their entrance into the complete state of Enlightenment. During this time, realized masters are still powerfully connected with all his students. Usually the first 3 days, it is advisable not to touch the body. During this time, the lama went through the outer signs of dying including the cessation of both his breath and the beating of his heart, but remained in that meditative posture for 56 hours, in Rinpoche's case.
It is believed that lamas who passed away at their will (in thugdam) have miraculous powers, and a blessing from such a lama would be very beneficial.
Please come back soon, Lati Rinpoche!


The mind is empty of mind;
For the mind’s nature is clear light.
See other related posts: