The Rice Dumplings Festival  端午节 this year is on 16 June 2010.  Following tradition, we would be eating more rice dumplings around this period. Not that I'm complaining. You see, I have a thing for sticky rice or anything related to sticky rice. It is sort of a comfort food to me sometimes, and I do get cravings for glutinous rice, be it in any form, snack or dish. 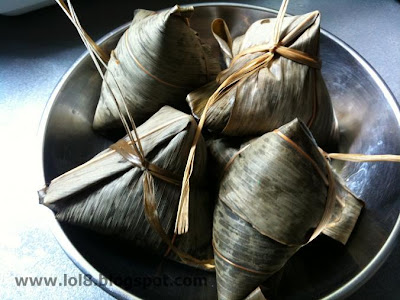 These are the Nonya rice dumplings (zong zi) made by sis' mother in law, who never fails to give us some every year. Made of glutinous rice stuffed with different fillings and wrapped in bamboo leaves, these rice dumplings are cooked by steaming or boiling.  Her Nonya rice dumplings taste very nice, peppery and sweet. Besides the usual ingredients like pork, she even put a pinch of sweet bean paste inside the dumpling. I like the other type of more savoury rice dumplings too, which have pork, chestnut, mushroom, dried shrimps etc.. 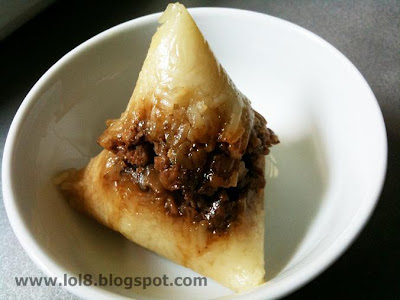 Unveiled, this is how a Nonya rice dumpling looks like, sans the oily leaves. The sticky rice itself is already bursting with taste, after being cooked and steamed, that all the flavours  of the ingredients within have permeated into and absorbed by the sticky rice, making it so flavourful. It is best when eaten piping hot. 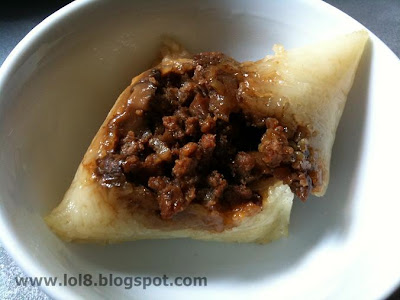 Dissected, this is how it looks inside. Yummy..... 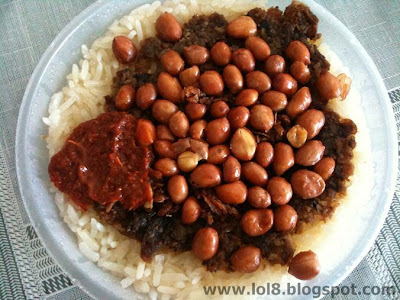 Another type of sticky rice is this Chinese-style Glutinous Rice 糯米饭, topped with fried dried shrimps and peanuts with a dash of chilli sauce.  I like my sticky rice simple like this. 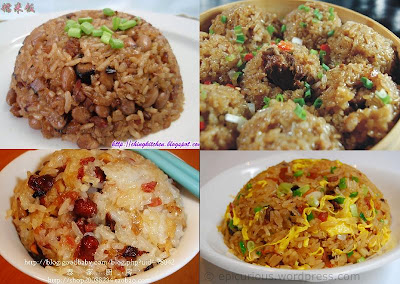 There are also many variations how the Chinese Glutinous Rice is cooked, depending on what ingredients you use. 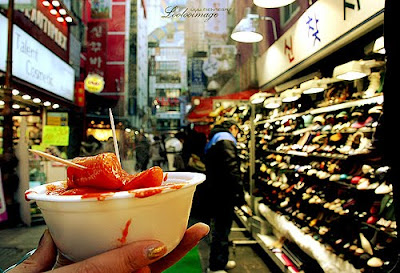 My love for glutinous rice doesn't stop there. I also like rice cakes, the Korean version. They are called Dduk Bokki which are steamed; they looked fiery red and kimchi spicy but they are actually not that spicy. I had these in Seoul where stalls lined the streets and where people buy and eat on the spot. Yummy. 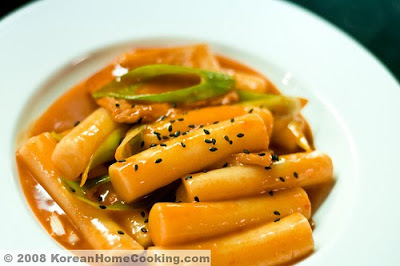 Here's a closer look of this dish Dduk Bokki. They are in round longish pieces, look quite plain, so you can savour the chewy taste of rice cakes. 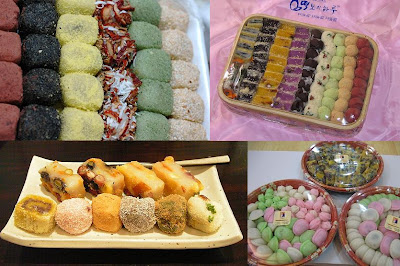 Another Korean rice cakes is Tdeok, a sweet version which is a snack. They look like the Japanese mochi and comes in different fillings inside. 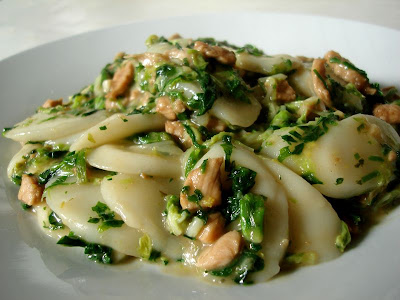 Another form of of sticky rice is the Shanghai Rice Cakes (nian gao). The rice cakes are cut into thin slices and stir-fried with cabbage (or other veggies) and pork. I do order this  savoury chewy dish once in a while in a chinese restaurant, and I like the one served in Imperial Treasures Chinese Restaurant. Yummy. 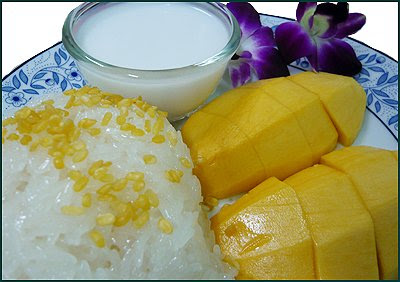 This is the Thai version of sticky rice, which is more of a sweet snack too. Sweet sticky rice sprinkled with sesame seeds and coconut milk is coupled with fresh mangoes. Most Thai restaurants do serve this dessert. 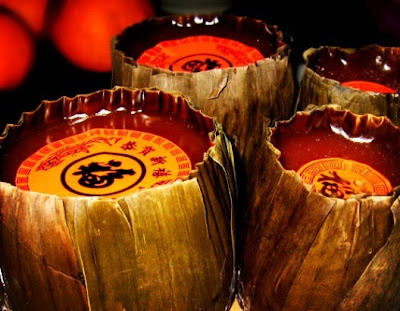 Our own version in Singapore is a totally different Nian Gao. Here the Nian Gao is sweet, and normally taken as a snack. During the Chinese New Year, we would buy this as they believe Nian Gao is supposed to bring good luck and progress when eaten during the new year. 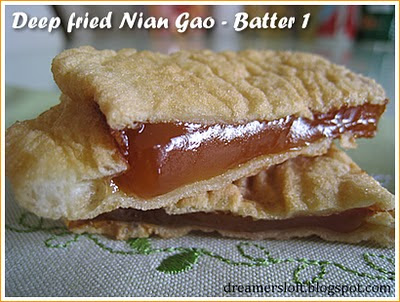 My mom would normally slice the Nian Gao into squarish pieces and  coat them and fried together with beaten egg. The result is a sweet sticky snack which is a little crispy on the outside and very soft and sweet inside.  I suddenly have the craving for this now..... 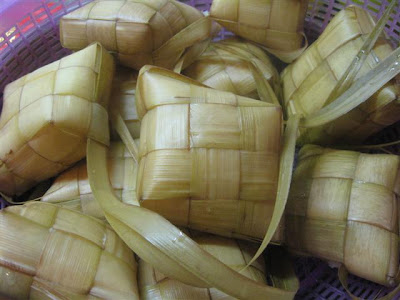 Another sticky rice which I like comes from our Muslim counterparts - they use Ketupat to go with some dishes. Perhaps it's the leaf that wrap the sticky rice which gives it a fragrant taste that is so enticing. 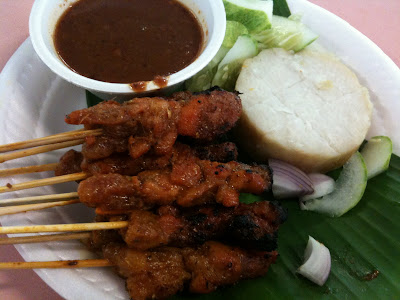 They can use Ketupat as a complementary side to the Satay. I just like the combination of nomming my satay, dipping the meat and raw onions and cucumber as well as ketupat into the peanut gravy. I won't eat satay without Ketupat. 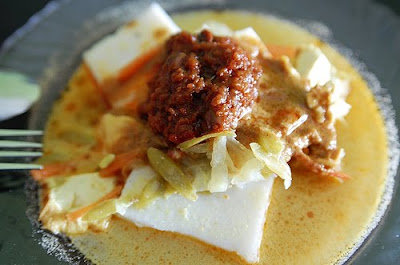 Another Muslim dish is Lontong which we can have it for breakfast or lunch or any meal. Lontong is often referred to as the plain compressed rice roll itself, but it is served as an accompaniment to other dishes. Lontong may be served in a coconut milk and vegetable stew gravy similar to Sayur Lodeh and topped with sambal chili paste, toasted coconut (kerisik) and hard boiled egg and veggies like cabbage, long beans, carrots and fried beancurd. 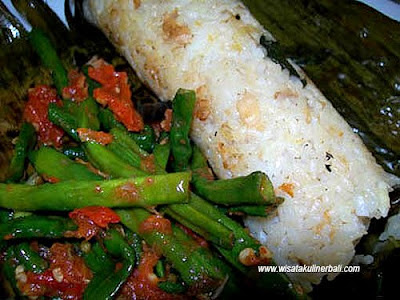 Just saw from another blog which features Nasi Bakar, grilled spicy rice, which you must try when you visit Indonesia. One restaurant in Tuban Street, Kuta, Bali, is selling an interesting variation of ‘Nasi Bakar’ wrapped in banana leaf. They roll the rice with shredded chicken, basil leaf and special seasoning mixed into the steamed rice before hand and then grill it on a traditional grill over charcoal. A suitable vegetable dish to go with Nasi Bakar is spicy chilli long beans. 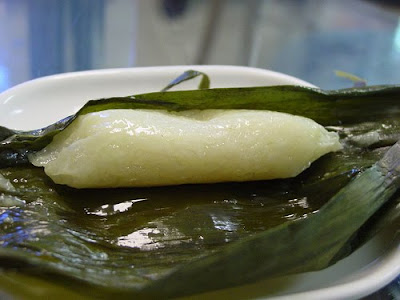 This is Filipino snack - Suman - which refers to any cake that’s wrapped in banana or coconut leaves, whether made from rice, grain, or root. The ingredients are few and the method simple, but it is one of the oldest and most popular Filipino snacks. The banana leaves imbue a sweet, tropical fragrance and flavor to the coconut-soaked glutinous rice. Quite similar to our Nonya kueh. 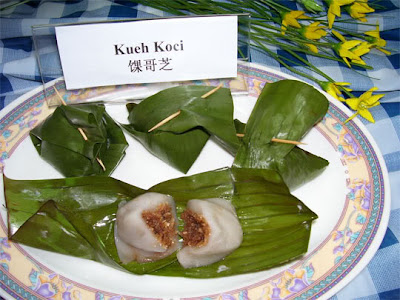 Talking about Nonya Kueh, there are so many kueh kueh which uses sticky rice too. This is Kueh Koci which is a pyramid of glutinuous rice flour filled with a sweet peanut paste. 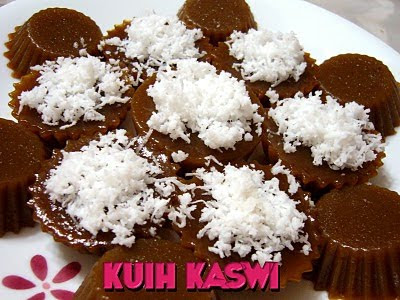 Kueh Kaswi are rice cakes made with palm sugar. The ingredients are mixed into a batter and poured into small cups (traditionally, it is done with Chinese tea cups). When served, the cup is removed and the rice cake is topped with grated coconut flesh. 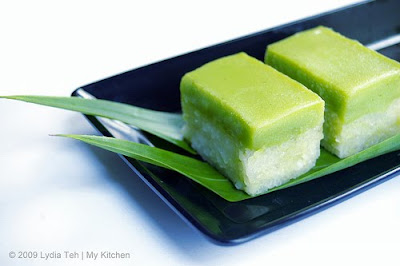 Kueh Serimuka is a two-layered dessert with steamed glutinous rice forming the bottom half and a green custard layer made with pandan juice (hence the green colour). Coconut milk is a key ingredient in making this kuih. It is used as a substitute for water when cooking the glutinous rice and making the custard layer. This kueh kueh is my personal favourite. 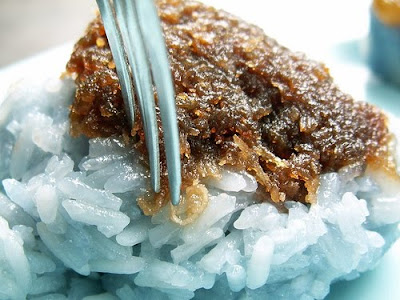 Pulut Inti is glutinous rice topped with caramelised grated coconut flesh and wrapped in a cut banana leaf to resemble a square pyramid. 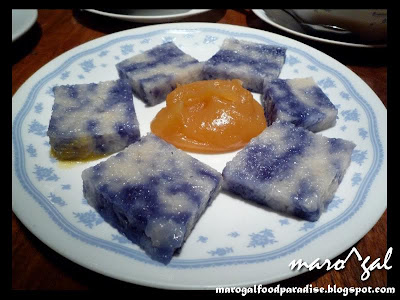 This kueh kueh is a little more unusual. It is called Pulut Tekan, a plain glutinous rice cake. It is served with kaya (jam from pandan leaves) coconut jam. The glutinous rice cakes are coloured with bunga telang. Half-cooked glutinous rice is divided into two portions. Both are them added with coconut milk but one of them is added with the bunga telang juice. This gives the rice cake a very bright blueish-indigo colour. The half-cooked glutinous rice is then scooped in alternating fashion into the original tray to give it a marble effect of blue and white. The rice is then cooked some more and when it is cooked and cooled, it is cut into tall rectangulars. With the above sooooo many dishes and snacks easily available, it's a wonder my love affair with the sticky rice is never ending....
yours truly, STUMPBO @ 11:34 pm

Email ThisBlogThis!Share to TwitterShare to FacebookShare to Pinterest
Categories Desserts/Snacks