Everyone knows it's the beginning of the long weekend. For Buddhists, they celebrate Vesak Day which falls tomorrow. Vesak Day commemorates the birth, enlightenment and parinirvana of Shakyamuni Buddha, The Enlightened One. Hence the full moon on this day should be spent engaging in virtuous activities and spiritual practice for the benefit of all sentient beings. Although we should be mindful and perform virtuous acts at all times, however, on this special day, all virtuous deeds/merits multiply by 100 million times! 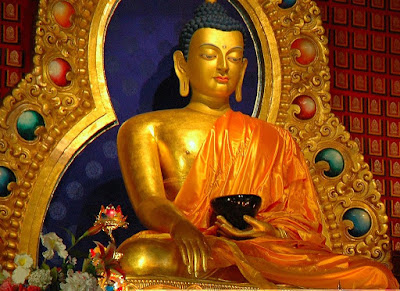 For Tibetan Buddhists, Vesak is known as Saka Dawa. This year, Saka Dawa in Tibetan calendar runs from May 14 – May 27. On the 15th day which is today 27 May, it is Saka Dawa Duchen.  This is a particularly auspicious time of the year to engage in spiritual practice.

Let me share my 2 short and vague dreams these 2 nights consecutively. Two nights ago, I had a dream I was in a temple with many people who were making offerings. Then I saw a Dharma friend, A, with her mother, who were busy helping out. Now in real life I have only met A once in my life, but I have dreamt of her many times since last year. I wonder why. Back to the dream, amidst many people I noticed a throne seat, and the crowd seemed to be queuing for blessings. Then I saw a lama on the seat blessing people one by one. As I joined in the queue, I prepared a red packet of offering. Then A, who was ushering the crowd in the queue, saw me, and whispered to me something (which I could not hear), and she turned to speak to her mother who was next to her. Her mother passed me an envelope, and instructed me that I put my offering into the envelope. It looked like a very unusual envelope, very colourful, with the Eight Precious Objects. And the strange thing was, there was a box printed on the envelope which had some numbers on it, like a serial number (I cannot recall what number). I received the envelope from A's mother and that was all I could remember of the dream.

Then last night, I had an even shorter and vague dream. In just a flash, I saw a huge thangka revealed before me from the sky.  A thangka is a Tibetan silk painting with embroidery, usually depicting a Buddha. On the thangka which was rolled down from the sky in the dark, with a beam of light when fully revealed, was Padmasambhava (or Guru Rinpoche) himself! 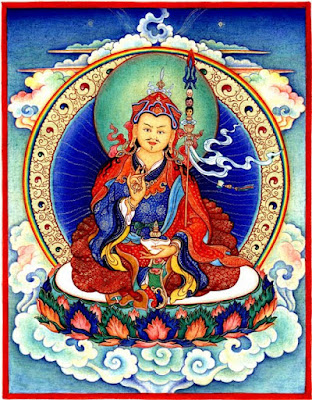 Padmasambhava is 莲花生大师 The Lotus Born, a great Indian sage who was said to have transmitted Tantric Buddhism to Bhutan and Tibet and neighbouring countries in the 8th century. In those lands he is better known as Guru Rinpoche. He is considered an emanation of Buddha Amitabha and traditionally venerated as "a second Buddha".


How auspicious to dream of Guru Rinpoche on Saka Dawa!  Thank you! I could recognise him in the dream because his crown was 'different' and his mousetache. This is not the first time I dreamt of Guru Rinpoche. In 2005, I also had dreams for 3 consecutive nights leading to him.

Below is the Seven Line Prayer, the invocation by which Guru Rinpoche came into this world.

Hung! In the north-west of the land of Oddiyana,
In the heart of a lotus flower,
Endowed with the most marvellous attainments,
You are renowned as the “Lotus Born”,
Surrounded by hosts of dakinis.
Following in your footsteps,
I pray to you: Come, inspire me with your blessing!
Guru Padma Siddhi Hung !

It is worthy to remember the words of The Buddha:
Rare is birth as a human being.
Difficult is the life of mortals.
Hard is hearing of the Sublime Truth.
Rare is the appearance of the Buddhas.