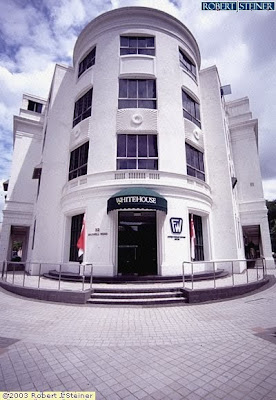 One of the weekdays, I had a meeting with a business associate around the Tanjong Pagar area. After the meeting, I had wanted to have the Yong Tau Hoo that used to have a stall behind the carpark near the "White House". I used to work nearby and always love the Yong Tau Hoo from that stall which was slightly different from the usual fare. 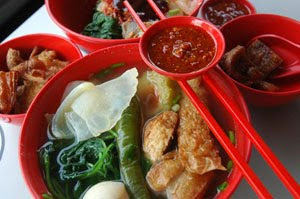 Alas, I found out the entire place has already been shut down.  I wonder where that stall has shifted to. If anyone knows, do let me know.

As I wandered around the White House, now known as the Maxwell Chambers Towers, I found a lot of new small eateries along Maxwell Road. This building is next to the Tanjong Pagar MRT station. 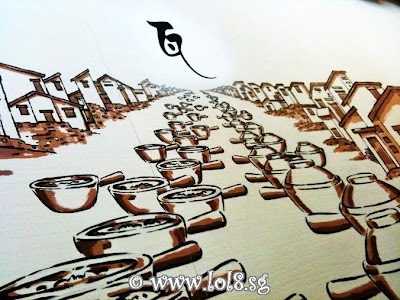 I met up with an ex-colleague and we decided to lunch at Clay Abode, a place specialising in claypot rice. This was the wall mural inside the eating joint.  As it was lunch time, it was crowded with a constant queue. 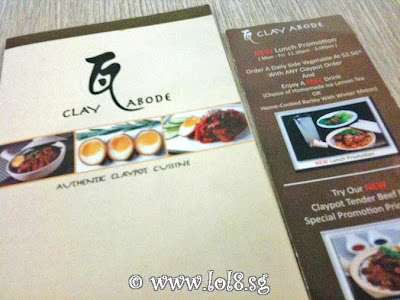 The menu selection was simple with a few types of claypot rice choices and some side dishes. It was available as a lunch set too. 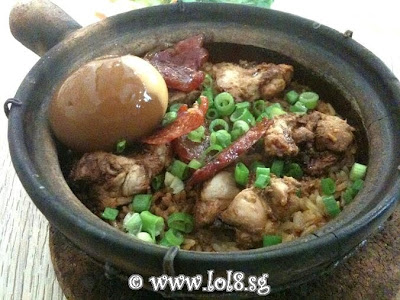 I ordered the Signature Traditional Claypot Chicken Rice.  I love the old school look of the claypot itself. Claypot cooking creates a healthy meal by retaining and cooking the meat in its own juices and nutrients. The secret is in the porous clay which absorbs water that is released as super-heated steam during the cooking. As the food cooked itself in a locked-in cocoon steam and natural moisture, it seals in the nutrients within the food. Hence there is no need for unhealthy oil or fat to be added for cooking. 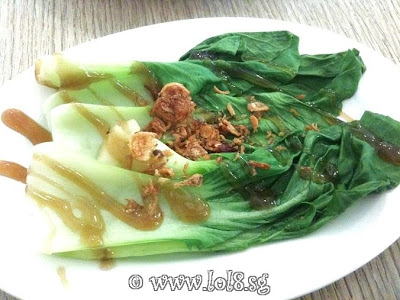 The lunch set came with a side dish of boiled veggies dribbled with oyster sauce and fried shallots. I also like the special Clay Abode Egg which was marinated with their special family secret recipe of sauces on the outside and with a soft delicious yolk centre. 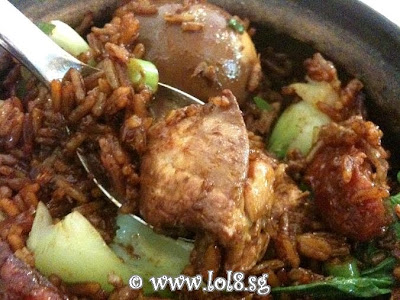 My Signature Traditional Claypot Chicken Rice came with premium XO Chicken Wine Sausage and salted fish. The chicken was tender and well marinated. The rice and sauces mixed became a dark bed of fragrant smelling rice. Although very tasty, however I find it lacked a tinge of the "burnt" taste which is synonymous with claypot rice. 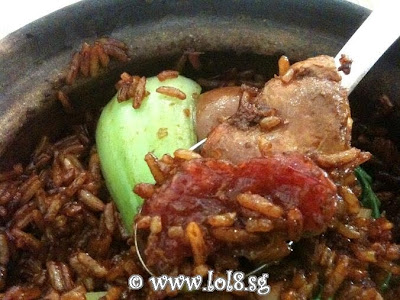 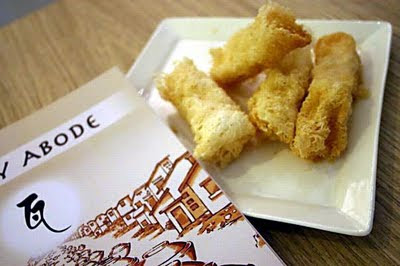 They have Fried Durian for dessert as well. I did not try as I was too full and was in a hurry. This photo is taken from www.junjunriko.com.

Email ThisBlogThis!Share to TwitterShare to FacebookShare to Pinterest
Categories Cafe/Restaurant