A feeble attempt at Rosti

One of the days, because I have potatoes at home, I decided to try making Rosti.  I have never attempted to make Rosti before. I searched the internet for a simple recipe. After noting the ingredients involved, and since I have all the condiments, I decided to give it a try on the spur of the moment. 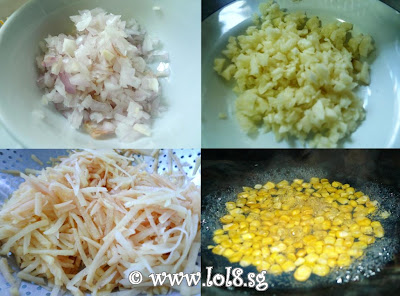 Peeled and shredded 5 medium size potatoes, 1 beaten egg, prepared minced garlic, minced onions,  pepper and salt. I decided to throw in corn as I have some frozen corn in the fridge. Mix all the ingredients together well. 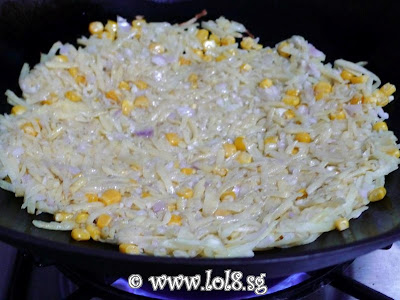 Heat up the wok, with 2 tablespoons of olive oil to be warmed on medium heat setting. Add the potato mixture to the wok, using a spatula to level the potatoes evenly across the wok. Cover the wok and cook over medium heat for 6-8 minutes or until golden brown. Next, remove cover and cook an additional 5 minutes. Now the only problem occurred when the potato mixture did not firm up after cooking only one side. Usually using a non-stick skillet should do the trick but I only have the curved wok. So when it came to flipping the Rosti over, all became loosely mangled. I had mistakenly thought it would "stick" after the first side was cooked. I tried desperately to flip the whole piece of Rosti in separate pieces, and then cook in uncovered wok for another 6 to 8 minutes, until golden brown. 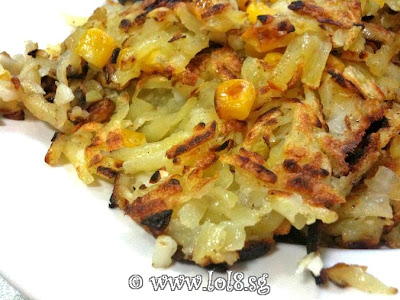 Sad to say I could not show a nice picture of the "whole" Rosti, and I think the fire was a little too hot at times, so there were minor burnt areas. Other than that, I am happy to say that it was edible and actually quite delicious! Here is just a glimpse of my first Rosti, a feeble attempt but I will do better next time!
yours truly, STUMPBO @ 1:21 am