I feel this is a strange period for me, because I have met some weird characters with a few strange encounters. They are not extremely bad experiences but some are just unbelievable to me. I have never ever in my smooth sailing boring life ever met with such incidents. 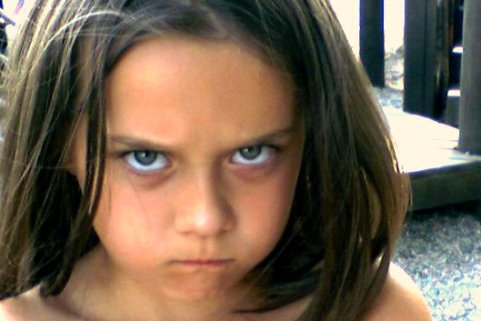 Just the other night, I was sort of ranting in Twitter about this young girl about 10-11 years old. She is the daughter of someone I know. I was happily having a conversation with another friend during a post-event, when this girl came up to me and played a not-so-nice prank on me. I shall not elaborate what prank that was, but I thought it was rude of her to do that when I did not provoked her in the first place. I still smiled and ignored her and continued chatting with my friend. If it had been my nephew who did that to me, I would have told him off or disciplined him.

It was only when I reached home and when I recollected what happened, I still felt a little uncomfortable. That was not the first time this young girl was being rude. In another time in another occasion, the very first time I met her, she has commented something rude to me, which left me stumped, even though I was minding my own business and I did not even know her then. My impression of this girl was she is a very intelligent and a  relatively pleasant looking girl.

Someone in Twitter responded to my little rant, here is our little conversation...

Twitter friend:  That girl could be quite lonely. There is one young girl who befriended my wife and she is lonely. Parents always not at home.

Me: No, she is a very intelligent girl with a lovely family. Was talking to someone when she appeared and played a prank on me.

Twitter friend: Ah I see. But that certainly is a call for attention. She probably likes you. :)

Me: She's a clever girl. Just that I don't understand why she needs to disturb me. Why me?! :(

Me: Hahah, I just don't understand why she likes to play pranks on me. I can see that she's also quite good at talking (back). I wonder if she does that to other people.

Twitter friend:  Chemistry. It's something that is really hard to explain. ;)

Me: I don't think she likes me or needs my attention, but I wasn't bothering her at all !! Chemistry??!!  More of bazi clash I believe. Luckily my niece is not like that.

Twitter friend: The eyes don't lie. Have chance, maybe you can talk to her and find out why. Her answer could be quite entertaining.

Me: I'm actually a little afraid of her. Just want her to leave me alone and hope she doesn't bother me if she sees me again.

Twitter friend: I see. For me, I have learn to speak up if something bothers me. I lost a friend in the event because I didn't.

Twitter friend: Why not? Could be fun. The girl who befriended my wife is 12 years old. She actually SMS my wife after exam telling her how it was.

Me: Hmm that's nice. Is your wife a counselor? FYI I've NEVER met any kid who irritates me like that. Usually I find them adorable, I adore them and they like me.

Twitter friend: She is not a counselor but somehow kids like to chat with her. Probably because she don't find it irritating chatting with kids.

Me: I love kids and also love to chat with them, and usually they are ok with me. This is the first time it's otherwise, that's why it astounds me.

Twitter friend:  I still think she wants your attention. Maybe she has never met someone who ignores her. :D

Me:  Hmm, thanks for the alternative perspective. I'll try to give her more attention next time. But I better run if she is going to play prank again.

Sometimes having an online friend can help in giving advice when you need it most.  I felt much better after this conversation. Maybe this little girl is someone whom I knew from my previous life and whom I had caused her harm before. That is why in this life, she has re-appeared to irritate the hell out of me. :P
yours truly, STUMPBO @ 11:12 am