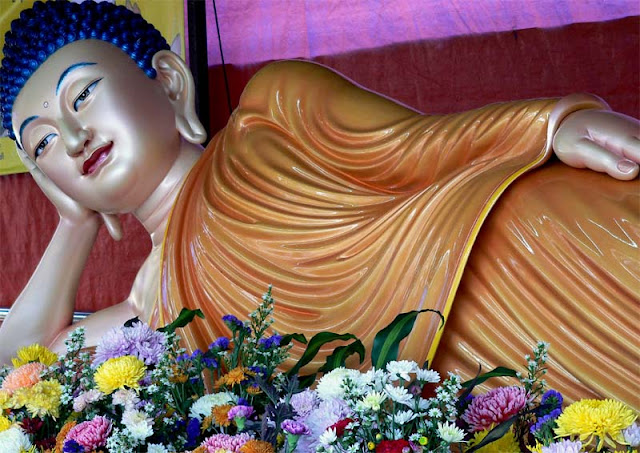 A long time ago, a nun told me that I have an affinity particularly with the Reclining Buddha and that I should pray to Him and make offerings to Him. I did not ask her why, thought it would sound rude of me to ask why. To me, I pay reverence to all Buddhas.


The Reclining Buddha symbolizes Shakyamuni Buddha at his attainment of Nirvana. During his approaching final moments, He asked his disciples to prepare a couch where He laid, reclining on his right side, facing west. With his head supported by his hand, He passed into Nirvana.

The statue of a Reclining Buddha does not evoke sadness. It is an encouragement that all sentient beings have the potential to become enlightened and attain Nirvana - be released from the sufferings which characterize the cycle of birth and rebirth. The Reclining Buddha is serene and composed. The Buddha is slightly smiling, to serve as a reminder of the serenity that comes with one’s enlightenment. May I be able to do so.
yours truly, STUMPBO @ 9:11 am