The extraordinary Garchen Rinpoche, the Living White Tara in Singapore 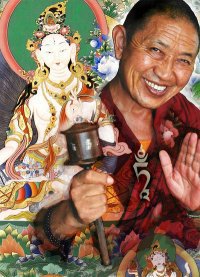 One of my favourite gurus came and just left Singapore.  I am so blessed to have had the chance to meet him personally, at almost the end of his visit here.  I had thought I would not be able to see him this time. His Eminence Garchen Rinpoche is one of my dearest gurus, and whenever he is in town, I would surely pay him a visit. I have already known him for a few years.

This time, when I met Rinpoche in his room, I did not know why but I cried and cried even before I spoke to him. I even forgot to do prostrations. I kneeled down immediately, palm clasped and cried and cried. Garchen Rinpoche is like a dearest Grandpa and Grandma all rolled into one. He hugged me tightly. He quickly asked me to sit beside him. I said no no (I should be kneeling down in front of my guru, lower than my guru). Then he wanted to get up and move to the 3-seater sofa so that I could sit beside him. Again I refused. I should not be sitting side by side with my guru, the embodiment of the Buddha of the Three Times. Garchen Rinpoche then reached out to get me some tissue paper and tried to speak to me in very very basic mandarin.  Then he held my hand and put it on his heart, and closed his eyes for a long while. I knew he was praying for me, blessing me and assuring me at the same time, with overflowing compasssion.  Then he gave me some personal advise, even when I have not uttered anything at all.  He also gave me a White Tara statue and a few other gifts. He gives different disciples different gifts according to their karmic affinity, I guess. How can I not be touched by such a clairvoyant master, a Bodhisattva, the Living White Tara?  In addition, I also renewed my refuge vows with Garchen Rinpoche this time. 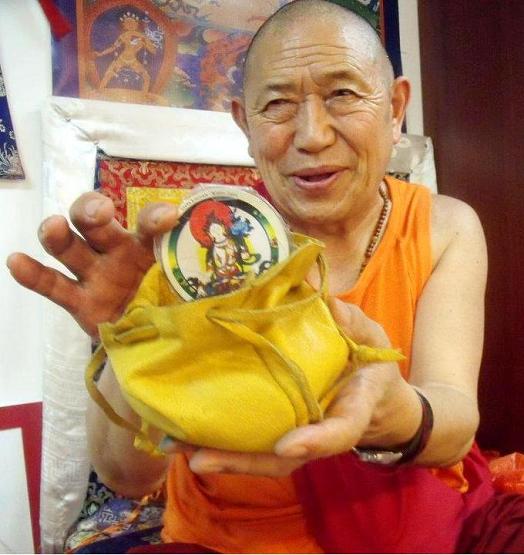 To the uninitiated, Garchen Rinpoche is an important high master in the Drikung Kagyu tradition. One of his previous incarnations, Gardampa Chodengpa, was born in 1180 A.D. He was recognized to have been an incarnation of Aryadeva Bodhisattva, a disciple of Nagarjuna. At birth he was able to hold a staff and he chanted the six syllable mantra. In another incarnation as Gar Choekyi Nyima, he chanted the Chakrasamvara mantra more than 13 billion times and became a Mahasiddha. He could perform great miracles, such as curing diseases, preventing wars, eliminating hunger, etc.

In this lifetime, Garchen Rinpoche was imprisoned by the Chinese for 20 years and put in a labor camp during the Chinese Cultural Revolution. Garchen Rinpoche kept on practicing in secret, according to his guru's instructions until he achieved the wisdom-mind realisation which was "an emanation of a Bodhisattva". He was practicing, in "retreat" for 20 years! When Garchen Rinpoche was released from prison in 1979, he took it upon himself to rebuild the Drikung Kagyu monasteries, re-establish the Buddhist teachings, and build two boarding schools for local children in eastern Tibet. Read about his biography here.

A Dharma brother shared with me his encounter with Garchen Rinpoche, who granted him personal refuge during his first meeting with him. When Garchen Rinpoche gives refuge, it is a little different from the norm; he would cut a little bit of your hair, blesses you with prayers, and then he would apply a very special balm to your head. 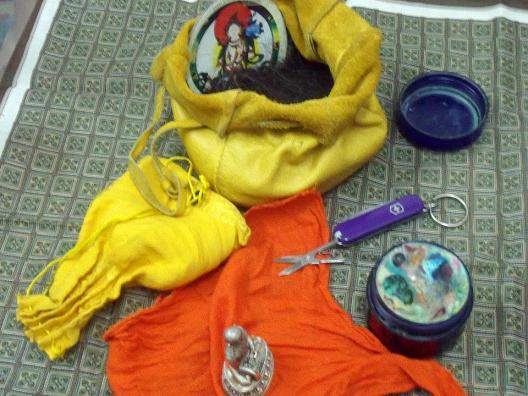 Garchen Rinpoche said that the hair he cut from you will be placed in a bag with White Tara in it, and whichever holy places Rinpoche goes to, he will do circumambulation and prayers with that bag. When he met His Holiness the Dalai Lama the previous time, he also brought along the bag of hair to be blessed, so that all his disciples and students can receive the equal merits and blessings he receives from His Holiness.

With White Tara in the bag as well, we are also constantly getting blessings and protections from Mother Tara at all times.  Garchen Rinpoche has assured and even promised us that he will be with us in all future lifetimes until we achieve Buddhahood. How blessed is that?

The special balm (called Blessed Chokor Jodrag) is made from the greasy residue of the precious Gyanagma prayer wheel at Gar Monastery which contains all the words of the Buddha that was miraculously built by the Great Hearer Licchavi Vimalakirti. The balm confers Liberation Upon Smelling and can be applied on the nostril of the sick, dying or deceased. Through the blessings endowed in it, one will be able to repel contagious diseases and be protected. The prayer wheel at Gar Monastery was miraculously hidden away for hundred of years, then uncovered, and then again hidden away at Yeshe Tsogyal's cave when Tibet was invaded by China. Then after the war, when Garchen Rinpoche was released, he re-installed it back at Gar Monastery in Tibet and it has been spinning since.

Before he left that day, Garchen Rinpoche reminded us, "please always pray to Tara. Inside this prayer wheel there is 150 million Tara mantras. I am always turning it for your sake, for the sake of all sentient beings. In one second, this 150 million Tara mantra is rotated once and there are immeasurable benefits ripened. I was involved in a car accident once and it overturned three times but I survived, all because of Tara. I was only very concerned with my prayer wheel when the accident occurred... I covered it with my hand to protect it..... I have accepted your money offering and I owe you debts, so I turn this prayer wheel for you".

How kind is that??  Read my post last year about this Great Bodhisattva. Another great news is, the movie about Garchen Rinpoche is already out, titled "For The Benefits Of All Beings", directed by Christina Lundberg, a beautiful film including charismatic storytelling by Garchen Rinpoche himself, interviews with peers and students, historical context using archival footage, unprecedented public and private access to Garchen Rinpoche in over 15 countries, and stunning visuals of Tibet.

Below is the trailer of this film. Watch the entire film in DVD if you can.

May my precious guru, Garchen Rinpoche have a long and healthy stable life. May he continue to turn the Wheel of Dharma for the benefit of all beings who are suffering in wretched Samsara.