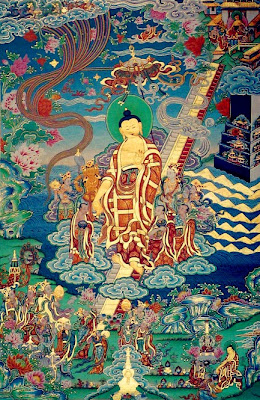 During his forty-first year, Shakyamuni Buddha ascended from Shravasti to Tushita Heaven, and spent the rainy season  there, teaching dharma to his mother, Queen Mayadevi, who had died seven days after Buddha's birth and was thus unable to receive any teaching from her enlightened son.  Mayadevi had been reborn in Tushita as a male god.

A great assembly of the kings and people of the eight kingdoms gathered. As the Buddha descended, a flight of gold stairs appeared, down which he came.  He was accompanied on the right by Brahma, who, holding a white chowry, descended on a crystal staircase, while to the left Indra came down a flight of silver stairs, holding a jewelled umbrella.  A great host of gods followed.

Thus Buddha descended in Tushita Heaven to repay his mother's kindness by teaching dharma to her and other celestial beings. He remained in Tushita for 3 months. As a result of receiving the teachings, Mayadevi attained the realization of an arhat.
yours truly, STUMPBO @ 12:01 am