His Holiness the Dalai Lama in Bodhgaya 2012

Happy 2012! Of course I must kick off my first post of the new year with the most compassionate guru, the Living Kuan Yin (Chenrezig), His Holiness the Dalai Lama.


His Holiness the Dalai Lama is currently in Bodhgaya, India, giving teachings and the Kalachakra empowerment to thousands of devotees from all over the world.  Thousands of pilgrims from Tibet, the Himalayan regions, Bhutan, Korea, China, Singapore and from the West sat under tents covering the large grounds to listen to the Dalai Lama. I have some friends who are there right now attending this event. Unconfirmed sources estimated the audience to be about 200,000. (Post note: Crowd attendance was more than 400,000).
Wishing his disciples a  ‘Happy New Year’, the Dalai Lama began his Kalachakra teachings for a record 32nd time since he first gave the initiations in May 1954 in  Lhasa, Tibet.

“This place (Bodhgaya) is a very holy place as the Buddha was enlightened here and those of you Tibetans who have come from Tibet despite lots of hardships, you all are among my special devotees for this Kalachakra,” the Dalai Lama said.


“Lots of Chinese from different countries have come including from Singapore and Thailand, and even from mainland China. Unfortunately nowadays, some conservative Chinese leaders consider Buddhism as sort of anti-China,” the Dalai Lama said in his opening address. He urged all his devotees to practice his teachings based on reasons and  not on “blind faith”.

Secretary Ngodup Dorjee told reporters “In information that we have received, we suspect there might be 1000 to 1500 spies attending the Kalachakra teachings sent by China to study and report on the Tibetan leaders and their activities in the exile community.”
The light rainfall which started earlier in the morning and ended along with the Dalai Lama’s teaching for the day has caused inconveniences to all the pilgrims, especially those staying in rented tents. But there were little complaints from the large crowd, as it is believed that a rainfall at the beginning of a religious teaching is auspicious and considered a blessing. 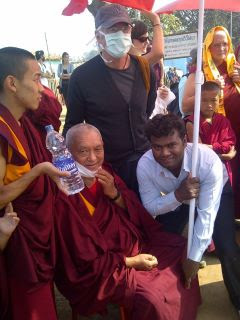 My precious heart guru, Lama Zopa Rinpoche, was seen along the road waiting for the arrival of His Holiness the Dalai Lama.  Besides Rinpoche, is reincarnate Charok Lama. 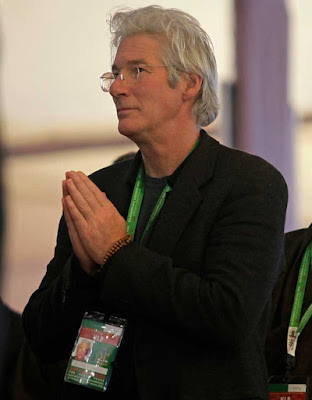 Hollywood star, Richard Gere, was also present for this event. Richard is a student of His Holiness as well as Lama Zopa Rinpoche.  He also attended Lama Zopa Rinpoche's long life puja 2 days ago in Maitreya Project land, Bodhgaya.

Watch this below clip capturing His Holiness' arrival at Bodhgaya and a brief teaching. Towards the 10th minute, notice the Tibetan devotees doing prostrations on the red carpet after His Holiness has walked passed. Devotees were praying and rubbing their mala beads on the ground, where His Holiness has stepped on, for his blessings. Such is the devotion they have, in seeing the guru as the Buddha, for His Holiness the Dalai Lama is indeed the manifestation of the 1000-Armed Chenrezig (千手观音).