I saw the below screenshot in my Facebook timeline from various people last night. Apparently, this poster was found outside a lecture theater in a local university campus, posted by a group called 'Campus Crusade for Christ' but was quickly taken down a few hours later due to the attention it was getting. However it was too late and someone had already screenshot and posted it online. 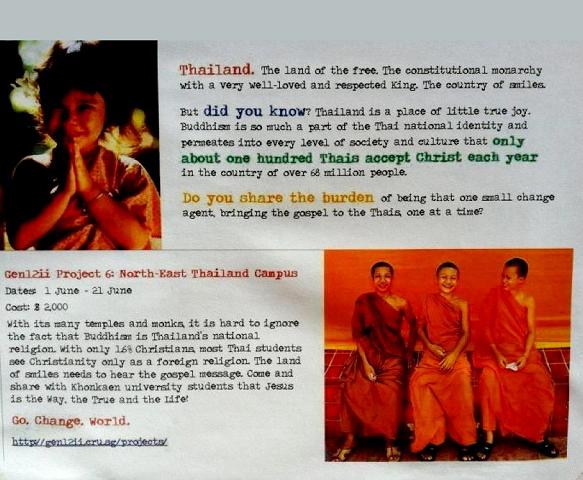 Written on the poster:
"Thailand, the land of the free. The constitutional monarchy with a very well-loved and respected King. The country of smiles.  But did you know? Thailand is a place of little true joy. Buddhism is so much a part of the Thai national identity and permeates into every level of society and culture that only one hundred accept Christ each year in the country of over 68 million people. Do you share the burden of being that one small change agent, bringing the gospel to the Thais one at a time?

With its many temples and monks, it is hard to ignore the fact that Buddhism is Thailand's national religion. With only 16% Christians, most Thai students see Christianity only as a foreign religion. The land of smiles need to hear the gospel message. Come and share with Khonksen university students that Jesus is the Way, the True and the Life."


With the beauty of social media, it has gone viral and more were found (see below screenshot taken from one of their 'projects'). This Christian group organizes proselytizing campaigns to various universities in so called Buddhist and Muslim countries to spread the gospel. I am very sure by today, the online reaction to this is going to run berserk. 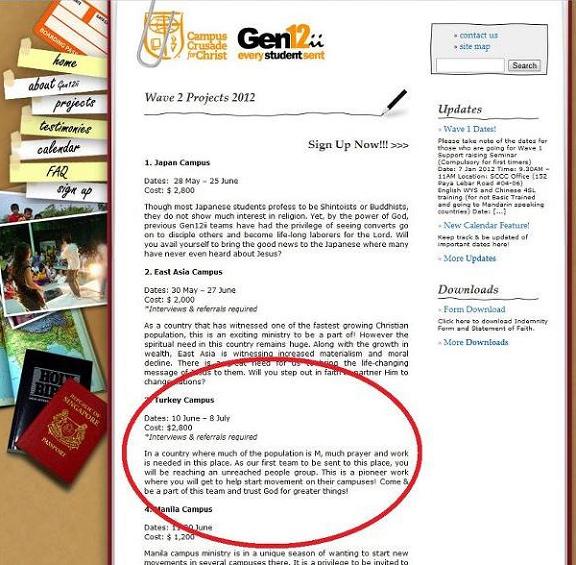 "In a country (Turkey) where much of the population is M, much prayer and work is needed in this place. As our first team to be sent to this place, you will be reaching an unreached people group. This is a pioneer work where you will get to help start movement on their campuses! Come & be a part of this team and trust God for greater things!"

Who are they calling 'M'?  So am I called a 'B'?  As a Buddhist, of course I find this offensive, rude and speaks of the arrogance of the said group who is trying to convert people. I am very sure the other affected religions feel the same way too. I think that is such a narrow minded view of the proselytizer. This is not the first time I am voicing my concerns. Christians have to be mindful of the beliefs and feelings of other religions and accept that others have THE RIGHT to be 'different' from them. For example, by not accepting Christ, it does not mean the believers of other religions are going to hell (to sidetrack, well, Buddhists know there are many other realms one could be heading to, besides hell....). 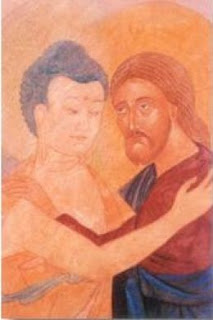 In Dharma teachings, we are taught to respect all beings and other religions, including humans and non-humans. The Buddha says, "Hurt not others in ways which you yourself would find hurtful."  Islam says, "Do unto all men as you would they should do unto you, and reject for others what you would reject for yourself". Likewise, Christianity says, "All things whatsoever ye would that men should do to you, do ye even so to them". Aren't all religions fundamentally teaching the same thing, so why is only one group behaving the opposite way?

What do we do when people criticise our religion?  For me, as a Buddhist, I do not need others' approval to practise the Dharma. Even if I do not agree with them, that is fine. Theirs is their own opinion and if they do not wish to change their views or misconceptions, that is purely their business. Nor do I want to convert to another religion. And that is my own business. It is fine to promote or propagate your religion but do not do it at the expense of putting down the other religions.

I quote Prime Minister Lee Hsien Loong's speech not so long ago.  He warned that “aggressive preaching” by religious groups and attempts to convert others threaten the country’s stability.

He cited the case of a Christian couple who were jailed for distributing religious pamphlets that were deemed offensive by those of different faiths, and he condemned those who try to convert ailing hospital patients “who don’t want to be converted.”

PM Lee said, "You push your religion on others, you cause nuisance and offense. Christians can’t expect this to be a Christian society. Muslims can’t expect this to be a Muslim society, and ditto with the Buddhists, the Hindus, and the other groups. Singapore’s prosperity depends on people respecting the beliefs of others. There is a wave of revival, mega-churches, and tele-evangelism. We all have to adopt ‘live and let live’ as our principle.”

His Holiness the Dalai Lama said: "All major religious traditions carry basically the same message, that is love, compassion and forgiveness. The important thing is they should be part of our daily lives. All agree that it is very important and worthwhile to make a strong effort to serve human society. To do this, it is important that we understand each other. In the past, due to narrow-mindedness and other factors, there has sometimes been discord between religious groups. This should not happen again. If we look deeply into the value of a religion in the context of the worldwide situation, we can easily transcend these unfortunate happenings. For there are many areas of common ground on which we can have harmony. Let us just be side by side- helping, respecting, and understanding each other - in common effort to serve humankind. The aim of human society must be the compassionate betterment of human beings."


Hallelujah and amen! Indeed, live and let live. If you feel you are being pressured and harassed by aggressive preaching, you can go to http://conversion.buddhists.sg/

You may wish to read my previous post on what differentiates Buddhism from Christianity.


P.S. By the way, the one in the university who wrote the above offensive poster should go back to learning proper English.