In memories of a great practitioner - Geshe Ngawang Longtho 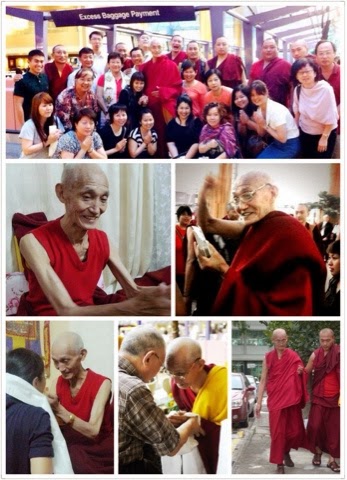 In memories of 84-year-old Geshe Ngawang Longtho, who passed away this evening. Geshe la was from Gaden Shartse Monastery and visited Singapore Gaden Shartse Dro-Phen Ling numerous times.  Geshe-la was a great practitioner and adept in conducting powerful pujas.

"Currently Geshe Ngawang Longtho remains in clear light meditation (thugdam) after clinical death. Thugdam is an honorific term for meditative practice during the period following the death of a great master, during which time they are absorbed in clear light.


A realized practitioner may remain in that meditative state for a number of days. Geshe-la manifests extraordinary practice as there is still a certain color of glow in his face, his skin remains soft and flexible, his body does not become stiff, and there is still warmth at his heart."

Way even before I became aware of Geshe Ngawang Longtho's qualities as a great practitioner, I somehow knew he possessed certain special skills and power. And this was because of a dream I had once.

In that brief dream, I was walking along a dark, empty and misty road, with no one in sight. Then Geshe-la appeared all of a sudden and was walking towards me. Relieved and happy to see him, I put both palms together to greet him. Geshe-la smiled and blessed me by putting both his hands on my head and chanting prayers. Then he turned to leave. However, he paused and turned back to me again and decided to continue his chanting, both hands on my head again. After a few minutes, to my amazement, I saw a gulf of black air, like droves of bees, coming out of my chest and escaped in rapid speed, which then disappeared into thin air. I believe that was somewhat a purification and healing ritual! When Geshe-la finished, he instructed me to adopt a certain deity practice on a daily basis. End of dream.

It was kind of a special dream. Even though I have never chatted with Geshe-la in real life before (because he was  quite serious looking and did not smile much, plus we would have been a chicken and a duck talking), the dream convinced me to have faith in Geshe-la's abilities and powers during pujas.  Geshe-la was among the group of highly respected old geshes in Gaden Shartse Monastery who are really skilful in conducting pujas which are so effective in clearing obstacles.

I last saw Geshe Ngawang Longtho in 2012 when we visited him. At that time, he was already quite thin, frail and weak. He gave us heartfelt advice and told us to keep His Holiness the Dalai Lama's precious teachings in mind. Inside his small room where almost 50 of us tried to huddle together, there were no dry eyes for most of us that day. Understandably, I knew it would be my last time seeing him.

May Geshe-la continue to benefit many beings in all lifetimes wherever he chooses to take rebirth. He will be dearly missed.