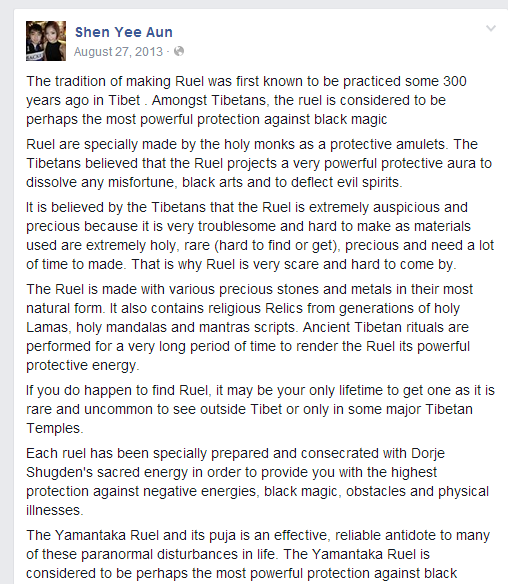 By chance, I stumbled upon a Facebook posting by a Malaysian blogger, sharing about the Yamantaka Ruel a few months ago. I am gravely disturbed that what he has shared is not true, and in addition he has distorted facts. I have written to him to voice my concerns and to remove his posting immediately. He has not replied nor remove his posting. I am posting here in my blog to reiterate the seriousness of such irresponsible act and to remind readers to be careful of what they read online.

In the testimonies he shared, Testimonies 1,2,3 were copied wholesale from my earlier blog post in which I had shared in 2007 about the ruel and the experiences of power of the ruel from friends whom I know personally. While I have no issue that he used part of the contents of what I wrote (without my permission), I am shocked that he has distorted the origins of the Yamantaka Ruel and added other pieces of information which was totally wrong, in particular the point which he wrote "each ruel has been specially prepared and consecrated with Dorje Shugden's sacred energy". This is utterly not true and misleading to readers.

The ruel is consecrated based on specific tantric deity and the contents are blessed with special tantric ingredients during the ritual. It is named Yamantaka Ruel for an obvious reason, and not named after any other spirit which Mr Shen has mentioned. Anyone who is familiar with or heard of the efficacy of the Yamantaka Ruel, they would know that the authentic Yamantaka Ruel is being made and consecrated from Gaden Shartse Monastery, and both the monastery and Gaden Shartse Drophenling do not have any connection with DS. Both monastery and the buddhist centre are following the teachings and guidance of His Holiness the 14th Dalai Lama, who does not encourage the practice of DS.  I have written a post recently, "Dagyab Kyabgon Rinpoche dispels rumours about Dro-Phen Ling regarding Dorje Shugden", in which my guru Dagyab Rinpoche highlighted during his one of his teachings.

My friend, Jamie from Gaden Shartse Drophenling, has also responded and clarified to Mr Shen's posting.  I quote her:

"Dear Mr Shen, I am the Jamie from Dro-Phen Ling whom you had mentioned in the post. I would like to clarify that the Yamantaka Ruels made by Gaden Shartse Monastery are certainly not remotely consecrated with any of the DS materials. Apart from the DS, many other ingredients stated in the post is NOT even true. Dear Mr Shen, please kindly be responsible with your public information as this is very misleading.

Gaden Shartse Monastery, Gaden Shartse Dro-Phen Ling, and myself do not engage in the practise of DS. We follow and abide by the teachings of His Holiness the Dalai Lama - this we cannot stress enough. Kindly refer to Dro-Phen Ling's website if you are unsure. Please kindly remove your post so that it does not continue to mislead the public. Thank you very much in advance."

I do not know if the Yamantaka Ruel which Mr Shen has invited and /or mentioned has been consecrated from authentic sources/ places/ teachers. Although it is obvious to me where he had invited the ruel from, I reserve any further comments.

I would like to remind readers to check the authenticity of any holy objects before they invite them home. For that matter, any devotee should check the buddhist centre and its teachers if they are practising properly according to the Dharma. In 2011, I have written a post on "How to know a fake guru when you meet one".

From the view of social media, I believe that being a blogger, one should be responsible for what he writes about, especially that coming from an aspiring young man. May all be auspicious according to the Buddha-Dharma.

"When teachers break the precepts,
behaving in ways that are clearly damaging to themselves and others,
students must face the situation,
even though this can be challenging,
criticize openly, that's the only way."

- His Holiness the Dalai Lama