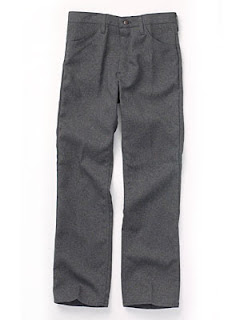 This on-going 2-year lawsuit in Washington DC made me flipped. A judge is suing his dry cleaners, a Korean couple for US$67million (S$99million) over a pair of lost pants.

Roy Pearson Jr sent in one pair of pants for alterations and they went missing. First, Pearson demanded US$1,150 for a new suit. Lawyers were hired, and eventually the Chungs offered Pearson US$3,000 in compensation. No dice. Then they offered him US$4,600. No dice. Finally, they offered US$12,000. Pearson said no. He says in court papers that he has endured “mental suffering, inconvenience and discomfort.'’

Instead, Pearson upped the ante considerably. Here's how he calculates the damages and legal fees over these two years:
- US$1,500 for each violation, each day during which the "Satisfaction Guaranteed" sign and another sign promising "Same Day Service" was up in the store -- more than 1,200 days.
- And multiplying each violation by three because he's suing the couple and their son.
- US$500,000 in emotional damages
- US$542,500 in legal fees, even though he is representing himself in court.
- US$15,000 for 10 years' worth of weekend car rentals as well (because he has to rent a car each weekend to go to another dry cleaner for 10 years.
TOTAL BILL - US$67million.

The ABC News Unit has calculated that for US$67 million Pearson could buy 84,115 new pairs of pants at the $800 value he placed on the missing trousers. If you stacked those pants up, they would be taller than 8 Mt Everests. If you laid them side by side, they would stretch for 48 miles.

All I can say is I empathise with the Korean couple, damn suay (Hokkien for unlucky) to have their American dream crushed, ruined their lives and to have bumped into such a person. Imagine the huge load of bad karma Mr Pearson is creating for himself. The world is round, Mr Pearson, it will all come back to you. Even if not in this lifetime, maybe in future lifetimes, you may wake up one day and wonder why you have suddenly lost US$67million for no reason at all. Or its equivalent consequence.
yours truly, STUMPBO @ 2:00 am