I apologise for not updating this blog as much as I have tons of things to share. It has been/will be a busy period since the arrival of my guru, the Great Healing Lama, Kangyur Rinpoche Lobsang Choephel.  Here is an update with photos, as I have not much time to write.

Rinpoche's meritorious program kicked off last Saturday with the much anticipated Great Fire Pujas of not one, but two, Fire Pujas of Peace and Increase.  It was a resounding success judging from the turn out.  We had expected about 1000 attendees on the open field next to Eunos MRT. However, more than 2000 devotees turned up to participate in the fire pujas, conducted by both 92 year old Kangyur Rinpoche and 85 year old Geshe Lobsang Jinpa, as well as 22 monks from Gaden Shartse Monastery.


Monk diligently drawing the mandala the night before the fire puja. All 22 monks from Gaden Shartse worked so hard in preparing and setting up the open air site next to Eunos MRT as well as in the centre, Gaden Shartse Dro-Phen Ling. 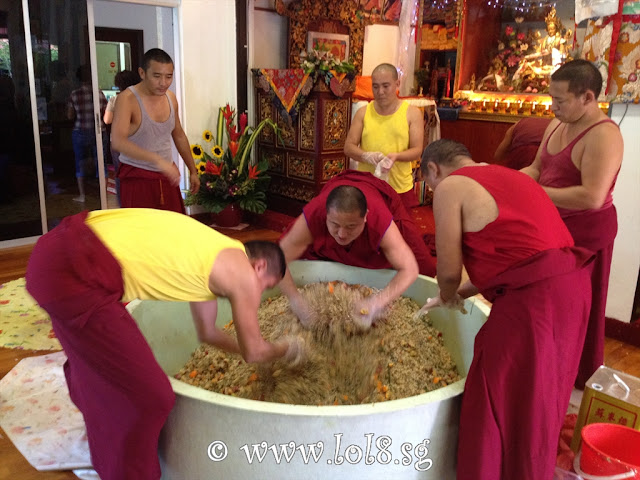 Monks mixing many different types of ingredients of the Fire Puja, to be used for offering. 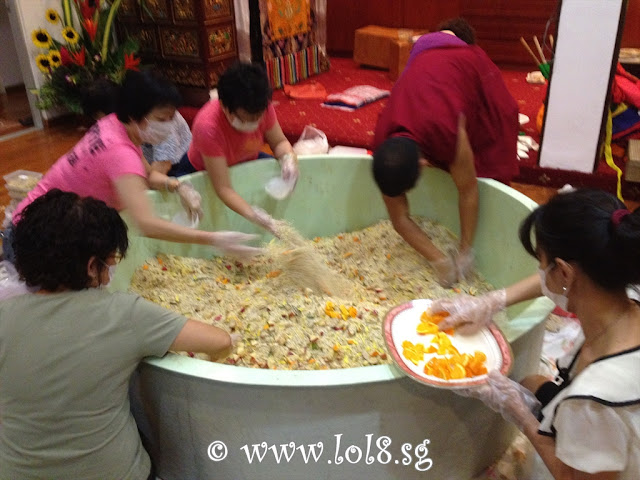 Volunteers helped packed the ingredients into thousands of boxes. 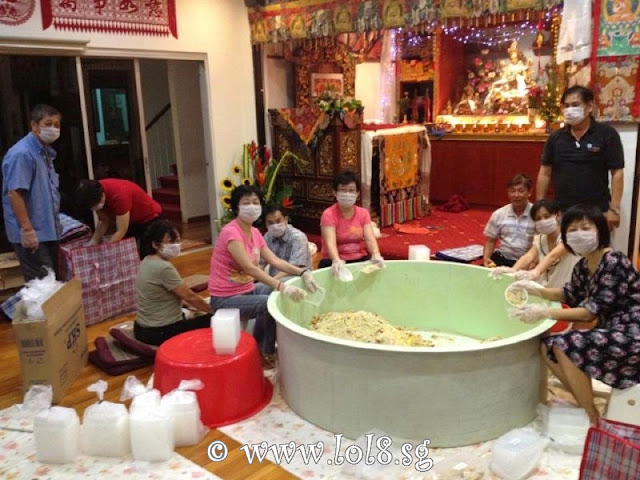 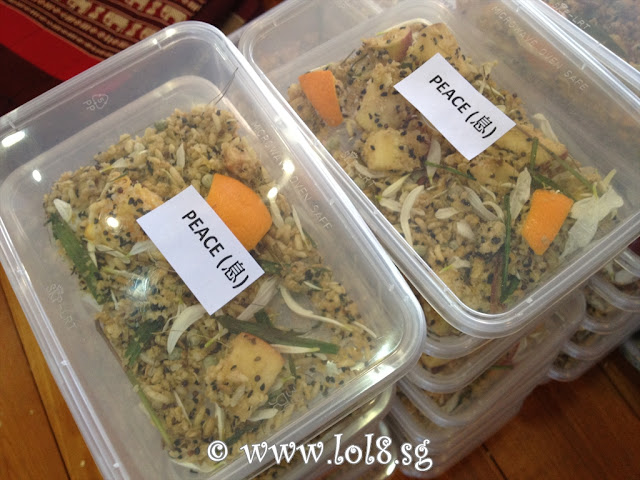 The fire puja ingredients of both PEACE and INCREASE are ready! 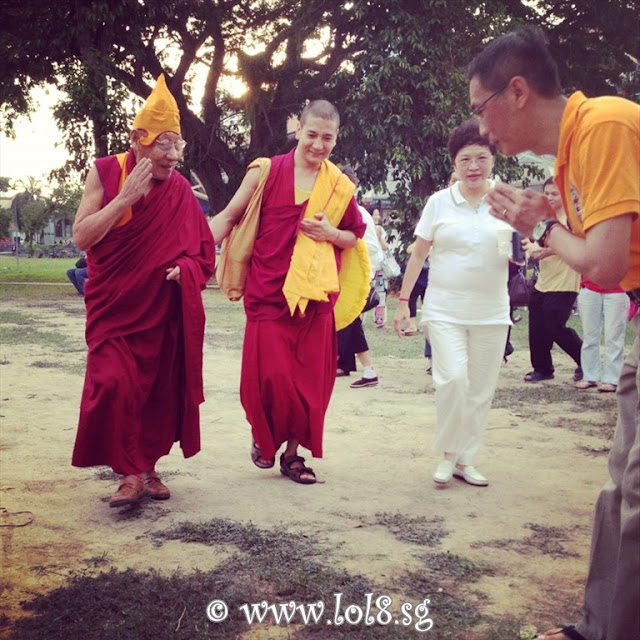 Finally on the actual day of the Fire Puja, the Healing Lama Kangyur Rinpoche arriving at the site of the Great Fire Puja, warmly welcomed by volunteers and devotees.


Kangyur Rinpoche and monks with VIPs at the start of the fire puja, reciting refuge prayers to and circumambulated around Shakyamuni Buddha.

Rinpoche in deep concentration and focused in prayers.
Kangyur Rinpoche, President of Gaden Shartse Dro-Phen Ling and VIP, Mrs Goh Chok Tong as well as other VIPs and devotees before the start of the fire puja, as the crowd slowly filled the entire grounds.


Kangyur Rinpoche in ceremonial costume as he begins presiding over the fire puja of Peace fire pit.


85 year old Geshe Lobsang Jinpa presided over the Increase fire pit. The fires were beautifully dancing, as prayers and ingredients were offered  to the fire, significance of offering to the Three Jewels.


An amazing sight from evening till late night of the supportive 2000+ crowd who surrounded Rinpoche and the monks. There were not enough chairs, many made do sitting on carpets on the grass. The Sangha gave up their carpet as more people came. Even the VIPs gave up their cushions for those without seats. A historic moment for many, as many were new to the fire puja and touching for the rest of us as all witnessed the entire process of offering and blessings. 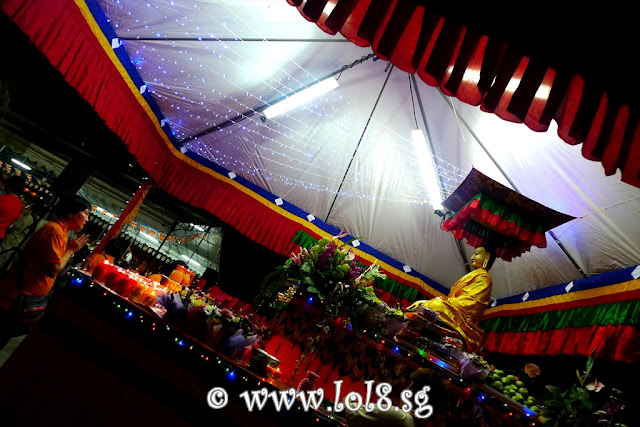 The tentage with lights, flowers and food offerings to Shakyamuni Buddha. 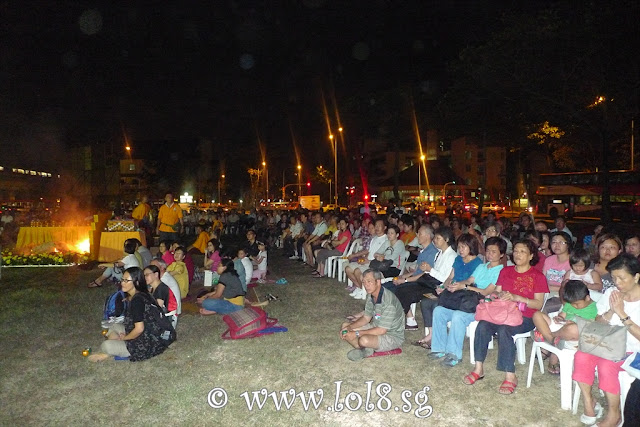 As the skies turned dark, many captured and witnessed the miraculous sight of the sky above the by-now holy grounds. 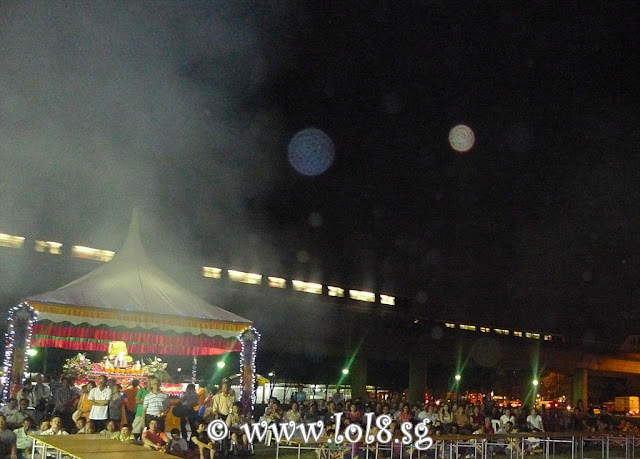 Attentive crowd, awed by Kangyur Rinpoche and monks as well as blessed by the presence of the Holy Ones. All devotees were so well behaved and orderly as they followed the instructions given and participated in the fire puja. Kudos to the volunteers who managed to control the huge crowd in an orderly manner.

Despite the heat presiding next to the fire puja, Rinpoche also gave personal blessings to the 2000 crowd one by one after the puja, much to the delight of the crowd. Rinpoche was so pleased that he gave words of wisdom and advice too. It was such a memorable night.  Rejoice in all the merits of all who participated in the Fire Puja last weekend.

Next up!  In barely 2 days time, this Saturday to Monday, 18-20 August, will be the keenly anticipated 3 glorious days of Grand Healing Puja in Marina Bay Sands (MBS).  Kicking off the opening ceremony would be the most important Naga Puja.

Kangyur Rinpoche first explained in 2007, that most sources of cancer come about due to Naga harassments and obstacles. Hence, Rinpoche has advised that it is best to participate in Naga pujas regularly to prevent such predicaments from befalling us. Rinpoche also specially pointed out that, should cancer patients experience re-growth of new tumors each time they have removed one, then this is a likely sign that this cancer disease has been caused by Naga attack. The only expedient way to pacify the Naga is through performance of Naga Pujas. There have been a few accounts where Dro-Phen Ling had conducted Naga Pujas and tumors of the cancer patients had miraculously disappeared; these are certainly living proofs which manifests the truth in Rinpoche’s words and advice.

Also join in the other pujas which are rare and effective in healing of various diseases, black magic, mental disturbance, as well as spirit harassment.  May all these Dharma activities prosper and benefit everyone.  May all be healed and rid of obstacles, diseases, and mental disturbance. May the Grand Healing Puja be a huge success and of benefit to all who have the affinity with the Great Healing Lama Kangyur Rinpoche and to receive his blessings.

Here is the schedule of the Grand Healing Puja. See you in MBS!