The most Venerable Zong Rinpoche in Singapore for the very first time!

I am very excited that one of the highest reincarnate lama from the Gelug tradition, His Eminence the 4th Kyabje Zong Rinpoche, is coming to Singapore for the very first time in 2 days time on Thursday 22 Aug 2013!

The late His Holiness Kyabje Zong Rinpoche is one of the greatest Masters during his time, an accomplished scholar and debater, as well the distinguished Abbot of Gaden Shartse Monastery for 9 years. Zong Rinpoche was also a powerful healer developed along with his pure practice and who manifested numerous miracles.

Like his previous life, the current His Eminence Zong Rinpoche is also a brilliant scholar and has all the makings of a great Teacher. Despite his age of 28, Zong Rinpoche is very mature, composed and learned. Even His Holiness the 14th Dalai Lama has publicly praised Zong Rinpoche to be an excellent scholar and practitioner, the best amongst the young reincarnate lamas today.

Kicking off Zong Rinpoche's dharma program in Singapore would be this Friday 23 Aug 2013, in-house teaching on the Four Noble Truth @ Gaden Shartse Dro-Phen Ling (12, Guillemard Lane) and then followed by the Wisdom & Bodhicitta Grand Puja during the weekend, 24 and 25 Aug 2013 at Marina Bay Sands Convention Hall. 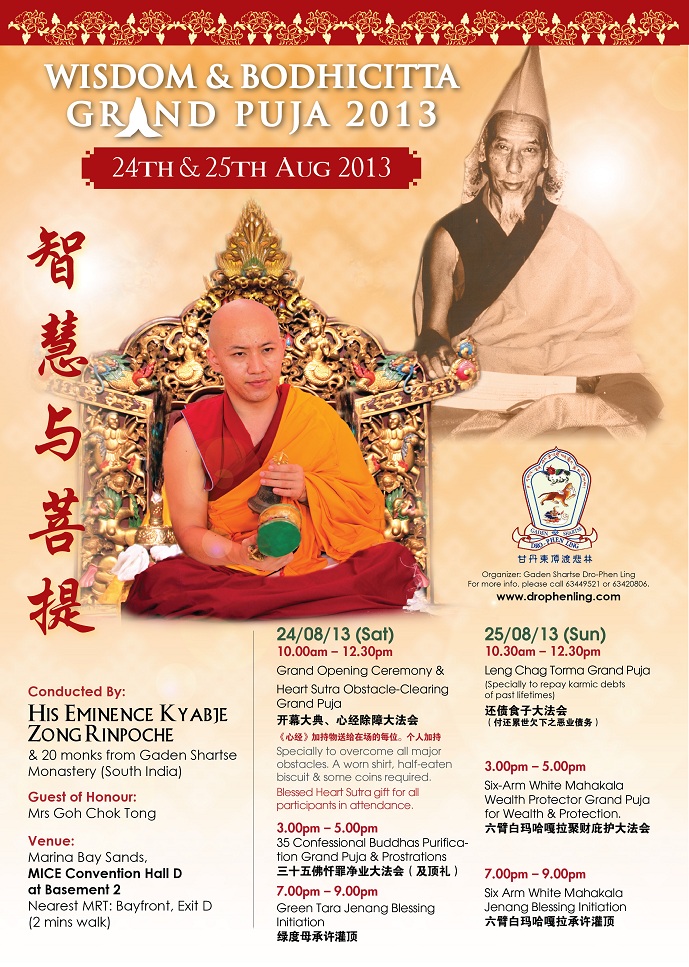 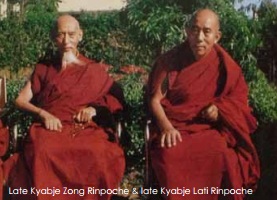 This upcoming event is a significant one, because it is symbolic of Zong Rinpoche taking over Lati Rinpoche's responsibility in serving all sentient beings. Even though Lati Rinpoche is no longer around, but the energy of his great compassion has not diminished. This time, Zong Rinpoche will undertake this event.

Tenzin Wangchuk continued, "The previous Zong Rinpoche was very well-known for rain-making. Rinpoche went to many Tibetan settlements and all he did was meditation and performed a Naga Puja, and he brought rain to the villagers. Rinpoche shared a very special connection with Nagas. At times when he goes to lakes, or walks by the waters, Nagas would come from these waters and appear to him (in form)."
His Holiness the Dalai Lama had mentioned that Zong Rinpoche is one of the best Tulkus (reincarnated lama), who has consistently topped the exams. His Holiness Dalai Lama said that he was very pleased with Zong Rinpoche's academic achievements and he hoped that Zong Rinpoche will be one of the Tulkus who will preserve and spread the Buddhadharma in the future.

The past His Holiness Kyabje Zong Rinpoche was the Guru of many of today's gurus, and his students include literally ALL the most distinguished masters of the Gelug tradition, including His Holinesses the 100th, 101st, 102nd Gaden Tripas, Lati Rinpoche, Lama Yeshe and Lama Zopa Rinpoche, Ribur Rinpoche, Khensur Jampa Yeshe and many many more masters.


When Zong Rinpoche was requested to select the initiations which he would like to confer in Singapore, he specifically chose Green Tara and Six-Arm White Mahakala.  It was unbelievable and amazing as coincidentally one of the highlights of the Grand Puja in MBS would be the White Mahakala Puja as well as the opportunity to sponsor the White Mahakala Wealth Vase. Hence Rinpoche's choice fitted in very well with the overall event!

Mahakala is the wrathful and powerful emanation of Avalokiteshvara (Guan Yin),bodhisattva of great compassion. The six-armed White Mahakala is known as Wish-Granting Gem and is very popular in Gelugpa. His iconography is rich and symbolic of his ‘wealth-deity’ status. For example his skull bowl, rather than contain the mortal remains of his victims, is full of various jewels. This wealth aspect of Mahakala specially supports the comfort and economic well-being

I am so happy that Gaden Shartse Dro-Phen Ling Singapore is able to invite Zong Rinpoche into Singapore for his first Dharma teaching program. I strongly encourage everyone to receive teachings and initiation blessings from the great Zong Rinpoche.  Do not miss the excellent opportunity in these Dharma-degenerating times to connect with a great Master!


So far, there is an overwhelming response from devotees far and near who are coming to meet Zong Rinpoche! May everyone be able to plant the seed of affinity with this Great Master who is the Guru of practically all Gelug masters! Rejoice!

Zong Rinpoche would be arriving early this Thursday morning 22 Aug 2013 via SQ503 at 6:05am. All are encouraged to give Rinpoche a big warm welcome at the airport. May all be auspicious for Buddhist devotees in Singapore!